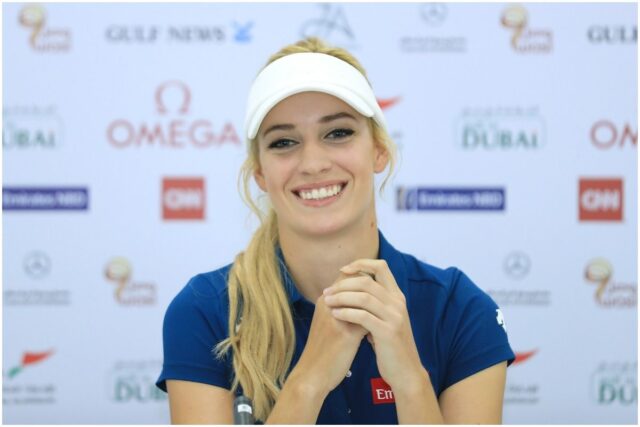 Paige Spiranac is an American professional golfer and one of golf’s most influential digital media personalities.

Her mother was a professional ballet dancer, while her father was a former football player.

During her youth, Spiranac practiced gymnastics. Her dream was to go to the Olympics, but her career ended after she fractured her kneecap on two occasions. This pushed her towards golf.

”Being an athlete was so important to my self-identity that even at that age, I knew I needed to find another sport quickly,” she told Golf.

During her high school years, Paige was home-schooled. At age 16, she won a tournament in Stockton, California.

She attended San Diego State University. During college, Spiranac was the captain of the women’s golf team.

In 2015, she led the San Diego State Aztecs to their first Mountain West Conference Championship.

Paige first played professionally in December 2015 and won her first pro win at Cactus Tour in May 2016.

In 2016, Spiranac landed the cover of Golf Digest.

In December 2016, she retired from professional golf.

In 2017, Paige became an ambassador for Cybersmile, an international non-profit organization that provides support for victims of cyberbullying.

”I’m extremely excited to announce my partnership with the anti-cyberbullying organization, The Cybersmile Foundation, to help change the world and raise awareness on this global issue,” Spiranac said in an interview. She added: ”I’m looking forward to participating in the meaningful initiatives that we have in store.”

”People of all walks of life are cyberbullied every single day, and that’s not okay,” Paige declared in 2015 for Swim Suit in an interview about cyberbullying. ”It’s time we made a difference, so I’ve dedicated a significant portion of my time to helping others.”

In February 2020, Paige started a podcast called Playing-A-Round with Paige Renee, where she talks about golf and the world of media in sports.

In 2020, Paige won The PWI Most Beautiful Woman In The World award.

In January 2021, Spiranac has officially joined the PointsBet, a premier global sportsbook operator.

She stated: ”I love connecting with my community on social media, and I know this category will be a fun, new way to get my audience more involved with not only golf but all sports.”

Johnny Aitken, US CEO of PointsBet, said: ”Today is a very exciting day for the company as we welcome Paige, the No. 1 most followed and interacted with golf personality on social media in the world, into the PointsBet family.”

Since May 2017, Tinoco works as a Certified Personal Trainer at Six Zero Six Fitness.

”My better half and my everything,” Steven wrote on Instagram in March 2019. ”You make me a better man every single day, and I am so lucky to get to spend my life with you! I love you.”

”Taking time to myself without my phone. I have been glued to my phone, and I noticed how it was negatively affecting my self-esteem.”

”I don’t know how golf can bring me so much peace one day and then make me want to break every club in my bag the next.”

Spiranac earned most of her wealth from playing golf as well as from hosting her podcast.

In addition, Paige publishes paid posts on Instagram. Some of her sponsors are Medterra, PointsBet Sportsbook, Perfect Practice, and X-Golf. In 2017, she signed with global sports equipment manufacturing company Parsons Xtreme Golf.

READ THIS NEXT: Who is Steve Kerr?