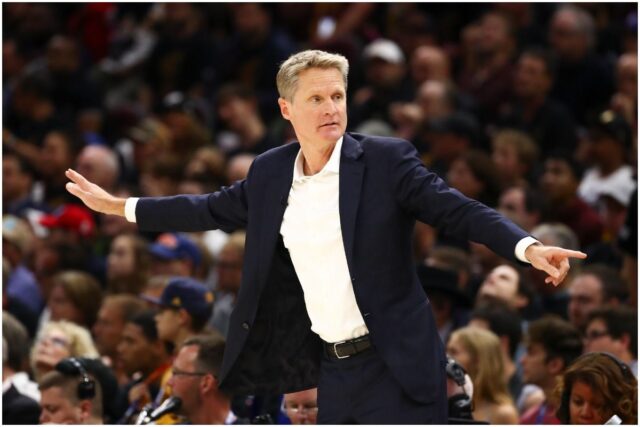 Steve Kerr is an American professional basketball coach who played 3½ seasons with Jordan in Chicago from 1995 to 1998.

His father was Malcolm Kerr, a university professor specializing in the Middle East and the Arab world.

In 1988, he earned a degree in general studies from Arizona with an emphasis in English, sociology, and history. Later, he was selected by the Phoenix Suns in the second round of the NBA draft.

In 1989, Kerr was traded to the Cleveland Cavaliers.

In 1993, Steve signed with the Chicago Bulls.

During a 1995 training camp, Kerr was punched in the face by Michael Jordan.

”I was like the kid in Jurassic Park who got attacked by the velociraptor,” he remembered. ”I had no chance. It was just mayhem. We were screaming at each other.”

They reconciled after Jordan apologized to Kerr during a phone call.

”We talked it out, and it was probably, in a weird way, the best thing that I ever did, was stand up for myself with him because he tested everybody he played with, and I stood up to him,” Steve told NBC Sports.

”It’s almost impossible to describe the impact he made on the league itself,” Kerr said about Michael Jordan in an interview with ESPN in March 2020. He went on to say: ”Because had I never played with Michael, honestly, I don’t think I would have been offered a contract by the Spurs.”

In January 1999, he was acquired by the San Antonio Spurs. The Spurs won the 1999 NBA Championship against the New York Knicks.

He retired after the 2003 NBA Finals. Later, Steve became a broadcast analyst for TNT.

In 2007, Kerr was appointed the general manager of the Phoenix Suns.

On May 14, 2014, he became the head coach of the Golden State Warriors. He started his coaching career with a 19–2 record.

Golden State Warriors won the 2017 NBA Finals by defeating Cleveland Cavaliers four games to one. This was the Warriors’ third consecutive trip to the NBA Finals.

”It’s one of the things I felt strongly about when I first coached the Warriors,” Kerr said for NBA. He added: ”I wanted to be fiercely competitive, but in doing so, I wanted the players to feel a sense of joy when they walked into the building every day.”

In 2020, Kerr appeared on The Last Dance, a sports documentary miniseries co-produced by Netflix and ESPN Films.

Kerr and his wife first met when they were both sophomores at the University of Arizona after Bruce Fraser set them up on a blind date.

The couple has three children – Nicholas, Matthew, and Madeleine.

”Don’t think shoot. Soon as you start thinking, you miss.”

”I remember Michael dribbling at the top of the key. Everybody knew to just get the hell out of his way.”

”The future is coming so fast, we can’t possibly predict it; we can only learn to respond quickly.”

He appeared on Shut Up and Dribble, 60 Minutes, Mike & Mike, Rush Brothers, Open Court, Pardon the Interruption, Last Call with Carson Daly, and The Tonight Show with Jay Leno.

He also worked as a broadcast analyst for Turner Network Television as well as a general manager for the Phoenix Suns.

In 2018, Steve bought a 4,000-square-foot home in Presidio Heights for $7.35 million. The seller was the Patricia Christina Hellman Trust. The house was listed at $5.7 million.

Therefore, professional basketball coach Steve Kerr has an estimated net worth of $40 million.

READ THIS NEXT: Who is Graham Rahal?