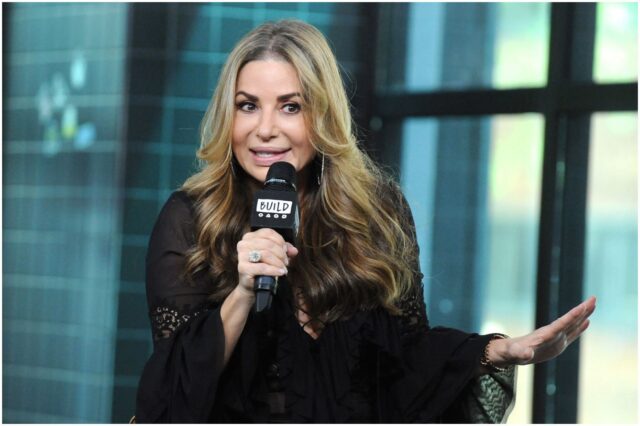 But, she is best known for her line of wedding dresses, which are regularly featured on the show Say Yes to the Dress.

Pnina is the eldest of four daughters of Shai Assis, an Israeli diplomat from Alexandria.

Tornai served in the Israeli military. After, she studied acting in France.

”Growing up, I actually never thought of becoming a designer. I always wanted to be an actress!”

The designer returned home in 1992 and got into the dress business. During an interview, she recalled:

”When I came back to Israel 10 years later, alone with my son, I needed to earn a living.”

Tornai went on to say:

“And the only thing I liked besides acting was fashion.”

”The first dress I ever created was my wedding dress.”

Her passion for design was inspired by her Egyptian father and Moroccan mother, who exposed her to elaborate cultural celebrations and ceremonies from a young age.

She first showed her dresses to Kleinfeld Bridal in 2005; however, her initial designs were rejected for being too sexy.

“That was really not an easy beginning because I remember the day where I came to Kleinfeld and showed my dresses, and the buyer was looking at my dresses with a very weird face, saying, ‘We are never going to sell these dresses in America.”

After only 2 years, she became Kleinfeld Bridal’s top vendor.

In 2009, she appeared on the Israeli version of the reality television show Big Brother VIP.

The collection is inspired by how wind moves water. She believes that:

For the LOVE collection, Pnina created 25 styles in varying silhouettes, which were designed for independent women worldwide.

The entire collection is priced between $2400 and $5000. It is designed with different organzas, tulles, crepe sateen, embroideries, and laces. Additionally, the collection is available in sizes 10 thru 22.

2020 LOVE Collection at the Dead Sea

“I chose to shoot the LOVE Collection at the Dead Sea as it is considered to be one of the world’s wonders, one of the most beautiful places on this earth because this collection is like no other.”

David serves as her business manager.

She has a son who studied Torah.

”I have a dress for every bride. I have dresses that are good for petites and for very tall brides and for skinny, tiny brides.”

“A fitted dress shows that the bride is confident in herself and also in her relationship.”

”I always connect with my brides and my customers and ask them how they envision themselves.”

Ginger Zee, the chief meteorologist for ABC News, said “I do” to her fiancé Ben Aaron with a Tornai dress.

Kim Zolciak, one of the original housewives who appeared on The Real Housewives of Atlanta, wore three Tornai wedding outfits during her nuptials.

She has been interviewed by:

She was given the name ”Pearl” (in Hebrew, Pearl translates to Pnina) at birth. That is her grandmother’s name.

The designer had many guest star appearances on Say Yes to the Dress, a TV series on TLC that follows events at Kleinfeld Bridal in Manhattan.

Tornai earned most of her wealth from designing wedding dresses. With more than 27 years of experience, she has established herself as one of the leading names in bridal fashion.

For the last decade, she has been the top seller at Kleinfeld Bridal. Her creations are sold around the world, including – in China, South Korea, Angola, Croatia, Germany, Greece, Italy, Israel, Bahamas, Canada, and the United States.

READ THIS NEXT: Who is Vivian Howard?