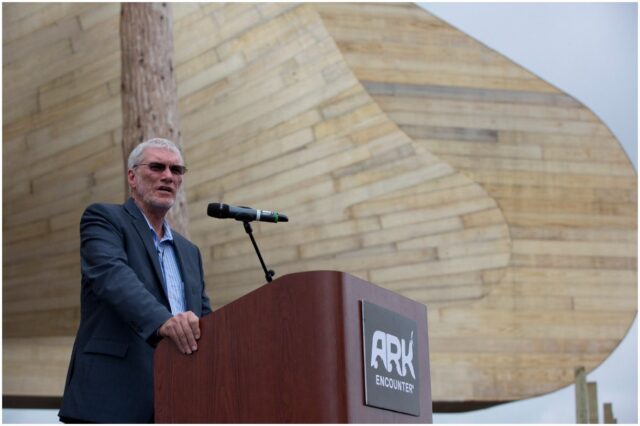 Ken Ham is an Australian young-Earth creationist and Christian fundamentalist who is the President of the Creation Museum and the Answers in Genesis.

In his teaching, Ham emphasizes the authority and relevance of the book of Genesis to the life of the average Christian.

His exceptional PowerPoint illustrations, captivating stories, keen sense of humor, and Australian accent, have made him one of North America’s most effective Christian communicators.

Ham said about his childhood:

”I was brought up in a Christian home in Australia with a father who was very bold about his faith.”

He earned a diploma in education at the University of Queensland in Brisbane and a bachelor’s degree in applied science from the Queensland Institute of Technology.

After college, he worked as a science teacher in Queensland, Australia, public high schools.

During an interview, he confessed:

”In the 1970s I became a public school science teacher in Australia.”

Ham went on to say:

”With my background, I didn’t accept evolutionary beliefs, as they clearly contradicted the Bible.”

”Our family moved to the United States in 1987 after I had already had many speaking engagements there.”

In 1994, Ham founded Answers in Genesis, a Christian group with:

“the purpose of upholding the authority of the Bible from the very first verse.”

AiG advocates Young Earth creationism on the basis of its historical-grammatical interpretation of the Book of Genesis.

Answers in Genesis’ United States headquarters are in northern Kentucky, at the site of its 60,000 square foot facility.

In June 2006, AiG launched the Answers magazine in the UK and the US.

In 2009, AiG posted a billboard with a boy aiming a gun towards the camera with the words:

Ham is the man behind the Creation Museum in Kentucky, which was built in 2007. Permanent employees of the ”Creation Museum” must sign a statement of faith affirming their belief in Answers in Genesis’ principles.

The 75,000-square-foot museum cost $27 million, which was raised through private donations. An estimated 200 protestors and 4,000 patrons visited the Creation Museum on opening day.

In 2016, AiG opened the Ark Encounter, a $102 million replica of Noah’s Ark as described in the Bible.

Ham said that his interest in the ”Flood and the Ark” was intensified when he read The Genesis Flood by Dr. John Whitcomb and Dr. Henry Morris.

According to the park’s publicists, there were 30,000 visitors in its first 6 days of operation.

At the opening, Ken declared:

“I believe this is going to be one of the greatest Christian outreaches of this era in history.”

”People are going to come from all over the world.”

At the end of Ark Encounter’s second year, Answers in Genesis reported an attendance of more than 1 million visitors for the year.

Note – Bill Nye is an American mechanical engineer, television presenter, and science communicator who is best known as the host of the ”Bill Nye Saves the World” show.

In February 2014, Ken and Bill Nye debated on the topic of whether young-Earth creationism is a viable model of origins in the contemporary scientific era.

Ken said that publicity generated by the debate helped stimulate the construction of the Ark Encounter theme park. The debate has been viewed by more than 21 million people live and through recordings.

Bill said the debate was:

“an opportunity to expose the well-intending Ken Ham and the support he receives from his followers as being bad for science education.”

Ham is the author of many books, including:

Ken Ham is married to Marilyn.

The couple has 5 children.

In addition, they have 16 grandchildren.

“You cannot have a political solution for a spiritual problem.”

”I look like Abraham Lincoln, and I talk with an Australian accent.”

“Every single Biblical doctrine of theology, directly or indirectly, ultimately has its basis in the book of Genesis.”

“I mean, what’s the atheists’ message? There is no God? When you die, that’s the end of you? So everything’s just meaningless and hopelessness?”

”Genesis has the answer to many of the problems facing the compromising church and questioning world today.”

”Life’s so much easier when you have all the answers, isn’t it?”

“Evolution is a religion; it is not science!”

In April 2017, Ozzy Osbourne and his son, Jack, visited the Ark Encounter to film an episode of their reality TV series.

Ham has been awarded:

Ham earned most of his wealth from being the president and CEO of AiG, a Christian apologetics ministry. Also, he is the founder of the Creation Museum and Ark Encounter.

Moreover, he is the author of several books, including – D is for Dinosaur, A is for Adam, The Genesis Solution, and The Lie: Evolution.

Also, Ken has a daily radio segment, “Answers … with Ken Ham,” that is transmitted on over 900 radio stations in the US.

Therefore, Australian Christian fundamentalist Ken Ham has an estimated net worth of $54 million (keep in mind that he owns the land that the theme park sits on – valued at approximately $48 million).

READ THIS NEXT: Who is Rupi Kaur?