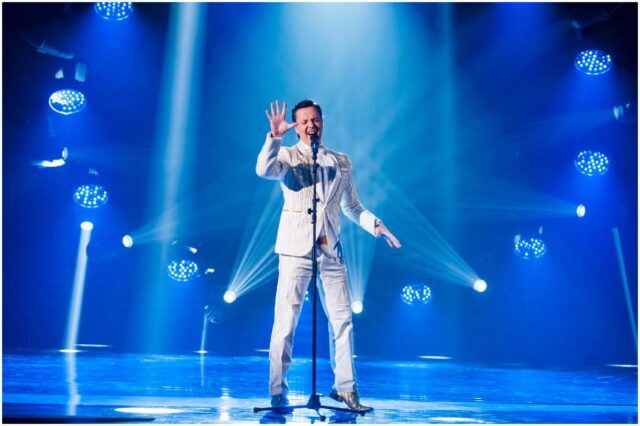 Vladasovich is also renowned for possessing a five-octave vocal range and for his unique and remarkable head voice that helps him to perform his trademark “turkey call.”

His eclectic pop music is difficult to categorize since it incorporates elements of folk (baltic), jazz, dance, opera, and techno music.

He was born in Daugavpils, Latvian SSR, Soviet Union.

Vitaliy was raised in Odessa (the third most populous city of Ukraine), where he attended an art school.

The artist started to write songs as a child. Also, his grandfather taught him to play the accordion, a musical instrument in the wind family.

Vitaliy made his debut in 2000 with a performance of his signature song, called – “Opera #2.” In the music video, the singer plays the accordion naked and portrays a man who lives in a bathtub.

The live performances and music video of Opera #2 became a hit on the Internet.

He composed Opera #2 at 10 years old after he awoke in the middle of the night with the lyrics in his mind. As soon as he woke up, Vitas went to the piano to work it out.

The lyrics of the song are:

“My house has been built but I am alone here
The door banged behind my back
An autumn wind is knocking on the window. . .”

In February 2001, Vitaliy held his first concert “Opera #…” at the Concert Hall “Russia” in Moscow.

Between the years 2001 and 2003, the Russian artist was recognized as Russia’s most prolific live performer.

In 2003, alongside Lucio Dalla, Vitas was invited to perform in front of President Vladimir Putin.

After the concert, the Italian composer invited Vladasovich to come to Rome to take part in the rehearsals of “Toska.”

Note – Lucio Dalla was an Italian actor, musician, and singer-songwriter, who died in 2012.

In dedication to his mother who died in 2001, Vitas released two albums, titled – ”Mama” and ”The Songs of My Mother.”

Both albums were released in November 2003, in the Rossia Concert Hall, Moscow.

Since 2005, his career has entered into Asian markets, especially in China.

In June 2006, he was invited by CCTV to take part in the grand event in Beijing, named – “The Year of Russia in China.”

To distribute his music in Taiwan, Vitaliy has signed with entertainment labels such as Universal.

In 2007, he toured China, attracting thousands of fans. In Shanghai, the tickets to his concert sold out fully about 30 days before the performance. Also, a ticket to one of his concerts had an average price of $166.83 (1,200 yuan).

In the same year, Vladasovich was signed with Gemini Sun Records. Back then, it was one of the top new age music labels.

On November 16, 2009, he played the role of Gude in the Chinese film titled – ”Mulan.” The movie premiered in Beijing. In 2009, he also performed his “Return Home” concert in Bucharest.

In 2011, Vitaliy won MTV Asia Best Foreign Artist. In addition, the artist made the Guinness Book of Records (Russian branch) for having the most fans.

The lyrics to the single are:

On May 10, 2013, he was arrested for hitting a cyclist with his car. The incident took place near the VVC Exhibition Centre, just northeast of Moscow. The investigation claims that after the incident the Russian pop singer escaped from the scene.

On August 26, 2013, Moscow’s Ostankino District Court ruled that he must pay a penalty of 100,000 rubles for the use of force against a policeman. This incident occurred after Vitas hit the cyclist with his car.

Vitas married Svetlana Grankovskaya in 2006. The two met in a night club in Odessa in 1999.

During a concert in Saint Petersburg, the artist sang the song “Lullaby” for his daughter, Alla, in February 2010.

In 2019, he has been immortalized in wax in China.

According to his manager, the singer practices for five to six hours each day and he does not smoke.

Vitas has performed duets with many other singers including Lucio Dalla and Demis Roussos.

One of his trademarks is his high pitched falsetto.

Vitaliy has won more than 10 awards through different competitions in Russia.

In China, Vladasovich has received the nickname “Prince of the Dolphin Voice.”

He often swings his microphone at concerts to prove that he is singing live.

Grachyov earned most of his wealth from his music. Vladasovich rose to fame thanks to his unique falsetto and “weird” look.

In addition to music, he has starred in a comedy called Crazy Day as well as in the TV series – “Beloved Scoundrel” in English.

Moreover, Vitas is a fashion designer and a YouTuber (his channel has over 163 million views, meaning about $500k in revenue). Additionally, he earns money from his concerts. In 2011 alone, he performed in San Francisco, LA, Vancouver, Miami, Chicago, Toronto, and New York.

Therefore, singer Vitas has an estimated net worth of $22 million.

READ THIS NEXT: Who is Young Dolph?