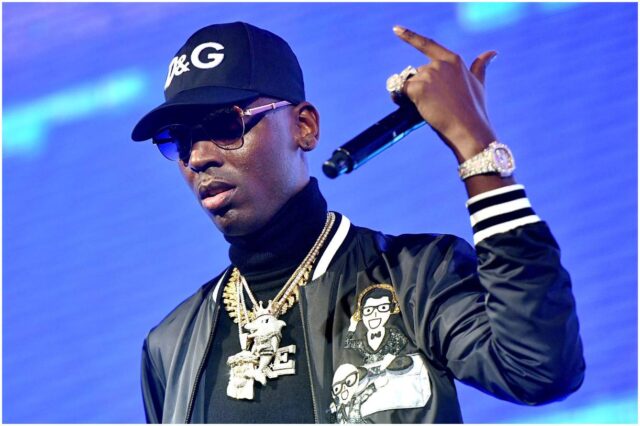 What is Young Dolph’s net worth?

At age 2, Dolph and his family moved to Memphis, Tennessee. There, the artist grew up with his four siblings.

He said about his father:

“My dad used to always tell me when we [were] little, like real little, ‘I’m rich.’”

After he finished high school, Young decided to focus on his musical career.

Soon, his cousins introduced him to many rappers. At some point, Dolph released his first mixtape, titled – ”Paper Route Campaign.” The mixtape was a success.

In February 2016, he released his debut studio album, named – ”King Of Memphis.”

The album boasts production from the likes of Nard and B, Cassius Jay, TM88, Drumma Boy, Zaytoven, and Mike WiLL Made It.

It peaked at number 49 on the Billboard 200 chart and debuted at number 8 on Billboard’s Top R&B/Hip-Hop Album Charts.

In early 2017, he released the mixtape titled – ”Gelato,” which has tracks featuring Lil Yachty, Wiz Khalifa, and Migos, as well as the Yo Gotti, diss track “Play wit Yo’ Bitch.”

On April 1, 2017, the American rapper released his 2nd studio album – ”Bulletproof.” He said about the album:

”Bulletproof is more on a hardcore vibe and street vibe.”

In January 2019, while Young was in a restaurant, burglars smashed a window on his Mercedes-Benz G-Wagon.

They ran off with a $230k watch, jewelry, electronics, and cash.

According to the police report, the thieves stole:

During an interview, Dolph said:

“I was in a restaurant, they broke in the car, know what I’m saying? Typical bulls—t.”

In July 2019, he linked up with rappers from southern Memphis Key Glock on their joint project, entitled – ”Dum and Dummer.”

Young Dolph was in a relationship with Mia Jaye.

He had two children.

”I’m planning to stay independent, but at the same time, I’m talking to majors, just because I’ve got so many offers out on the table.”

”I just like music. You hear music every day. It’s something you can’t dodge.”

Young worked exclusively with Gucci Mane on a few projects.

On February 25, 2017, while in Charlotte for the CIAA college basketball tournament, his SUV sustained dozens of bullet holes before the gunfire stopped. The rapper walked away without any physical wound.

It was speculated that the shooting had come from a rivalry between rapper Yo Gotti and Young, however, both parties have remained silent.

Shortly after the shooting, Blac Youngsta was charged with:

Note – Blac Youngsta is an American rapper who released the mixtapes I Swear to God and Young & Reckless. In 2015, Blac Youngsta signed to Yo Gotti’s Collective Music Group label.

On September 26, 2017, Young was shot outside the Loews Hollywood Hotel in Los Angeles. Dolph fell down, got back up, and stumbled into a shoe shop to call for help.

He was listed in critical condition at the hospital, however, within several hours, the surgeons said that Dolph was expected to survive.

During an interview, the artist said:

“I knew I was shot one time, but I didn’t know I was shot three times: two in the leg, and one in the arm.”

Note – according to the police report, there were around 50 shots.

Dolph earned most of his wealth from his music. For instance, his debut album, ”King of Memphis,” reached the Billboard Top 200. The American rapper has been active in the hip-hop scene since 2008.

In addition, Young sold merch (shorts and t-shirts) on his website – itsdolph.com.

His YouTube channels have over 2.4 billion views, meaning about $7.5 million in revenue before taxes.

Therefore, at the time of his death, Young Dolph had an estimated net worth of $10 million.

READ THIS NEXT: Who is Tom MacDonald?