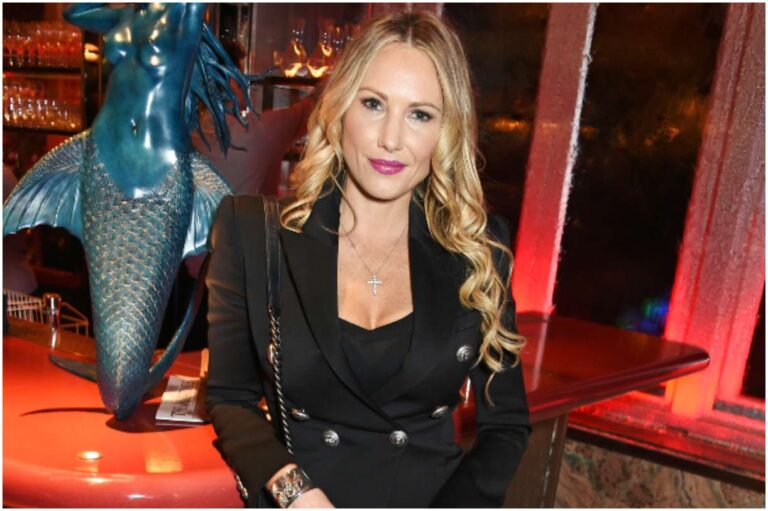 Adela King is a London fashion designer and socialite who created her own boot line called Adela King Boots and the successful maternity business 9 London. King became known on season 3 of the TV series Ladies of London.

Adela was raised in Florida, Hong Kong, and Singapore before moving back to London to attend Heathfield boarding school.

She appeared in season 3 of Ladies of London, the Bravo Real Housewives franchise which focuses on the lives of a group of society ladies in London.

She is a fashion designer and runs a maternity wear brand named – ”9 London.”

Her company has gone on to see huge financial success and is worn by American singer Gwen Stefani and English model Kate Moss.

King started modeling for the first time at age 42.

In 2013, after an ongoing custody battle with her ex-husband, Adela had fallen into a state of depression. She even attempted to take her own life.

”I think I was in the darkest place the one thing in my life I lived in fear of was my ex-husband.”

She also fought addiction to substance abuse and alcohol on and off for about two decades. She has been sober since 2014.

During an interview, King confessed:

“You just don’t get sober and everything’s amazing and perfect. No. You’ve got so much s### to clear up from the mess and the bad choices you made when you’re unwell.”

Adela went on to say:

”I made some really bad choices, and I’m still paying for that today. But it’s my journey, and today, I can put my head on my pillow at night with humility, not humiliation.”

Adela got married to Chester King, a wealthy businessman who runs International Group (most famous for their purchase of Stoke Park in Buckinghamshire) along with his two brothers, Witney and Hertford.

International Group boasts annual revenues of over $100 million per year.

In a 2019 Instagram post, King wrote that she had a lucky escape from Jeffrey Epstein and his ex-girlfriend Ghislaine Maxwell, who tried to recruit her for a threes### in London’s Mayfair 25 years ago.

”Most of you will be familiar with the atrocious behavior of Jeffrey Epstein and his accomplices and I’m here to tell my story.”

”I was 20 years old and at an evening event at Syon Park when a woman came up to me and asked me whether I was a model and did I have a portfolio. I said yes.”

”She (Ghislaine Maxwell) told me to be at Claridge’s at 8 pm and ask for Mr. Jeffrey Epstein’s suite.”

After Adela arrived at the Claridge’s Hotel, Jeffrey Epstein instructed her to pose in a degrading way.

Note – Jeffrey Epstein was an American financier who was arrested on July 6, 2019, on federal charges for sex trafficking of minors in New York and Florida.

He was a former friend of Prince Andrew, Presidents Bill Clinton and Donald Trump, and other celebrities.

On August 10, 2019, Epstein was found dead in his Metropolitan Correctional Center jail cell. Epstein’s death was ruled a suicide by hanging.

His lawyer expressed deep skepticism (e.g. the malfunction of two cameras in front of his cell, the falling asleep of two guards who were meant to check on him, or the removal of his cellmate without a replacement) that his client died by hanging himself in a Manhattan federal jail.

Reid Weingarten also said to Judge Richard Berman in U.S. District Court in Manhattan during a hearing that the injuries suffered by his client are “far more consistent with assault” than suicide.

Attorney General William Barr said he was “appalled” by Jeffrey’s death while in federal custody.

”I am doing this as it’s the truth and the truth is in question so I am telling my story in support of all the women that suffered so horrifyingly at the hands of them and their accomplices.”

She is a longtime friend of Caroline Stanbury, who was once said to have been the girlfriend of Prince Andrew. Currently, Stanbury has three children and is married to financier Cem Habib.

Caroline said about her friendship with King:

”We have been good friends for many years. We lost our way a bit but again are rebuilding everything we have and at the end of the day all friendships are bigger than petty issues.”

”She has and is having a tough time and i’ll always be there to support her visa versa.”

During the ”Ladies of London” show, Adela was very open about her struggles. After the TV show ended, Adela was asked if she has any regrets:

“On the show, I don’t say anything I don’t mean. I genuinely do mean everything that I say.”

”I was as honest as I could be. I was exactly who I was.”

King earned most of her wealth her own boot line ”Adela King Boots” as well as from running the maternity business “9 London.” Adela also earned some money from appearing in the ”Ladies of London” show. In addition, being married to a millionaire increased her wealth significantly. Therefore, Adela King has an estimated net worth of $5.8 million.