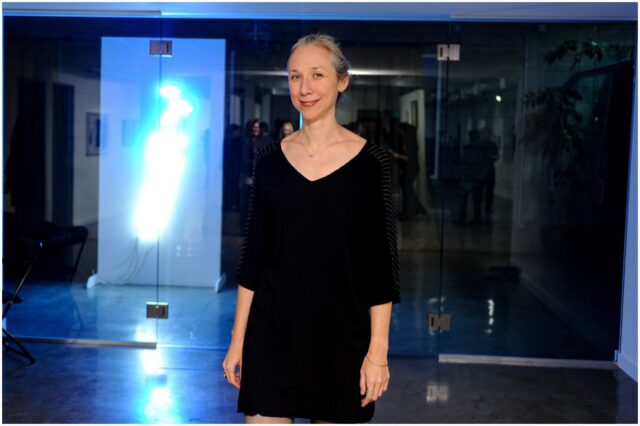 Alexandra Grant is an American visual artist who uses language as a source for her work. She described herself as “a writer who writes with materials.”

Grant was born in 1973 in Fairview Park, Ohio, USA, to a political science professor and a geology professor.

Her parents divorced when she was young,

Around 11 years old, Alexandra attended a boarding school in St. Louis, Missouri. Later, Grant attended the International School in Paris after she has moved there with her mother.

She graduated from Swarthmore College with a BA in history and studio art in 1994. In 2000, Alexandra graduated with MFA in Painting and Drawing at the California College of the Arts.

In 2007, she had her first solo exhibition at the Museum of Contemporary Art in LA. In the follow-up year, Grant participated in Edgar Arceneaux’s Watts House Project.

From 2009 to 2011, Alexandra taught at the Art Centre College of Design located in California.

In 2015, she directed a documentary film called Taking Lena Home. In the same year, Alexandra was an MFA program mentor at Syracuse University.

Alexandra Grant is in a relationship with actor Keanu Reeves. According to reports, Grant managed to get Reeves to open up about his past and emotions.

Note – When Reeves was 23, his best friend River Phoenix died of a drug overdose. About six years later, in 1999, Jennifer Syme (his girlfriend at the time) gave birth to their daughter Ava, who was stillborn.

In 2001, Jennifer Syme died instantly after she drove her Jeep into a row of parked cars on Cahuenga Boulevard in Los Angeles.

Alexandra and Keanu have been friends since at least 2011 when the two teamed up for a project, a book titled ”Ode to Happiness.”

The book was written by Keanu and illustrated by Alexandra. The first page reads – “I draw a hot sorrow bath.”

In 2016, the couple collaborated on Keanu’s book ”Shadows.” She said in an interview:

”Keanu and I collaborated on two books: Ode to Happiness and Shadows.”

Grant went on to say:

”I actually made Ode to Happiness for Keanu based on a very funny sixteen line poem that he had written, and then we just surprised him with the book.”

In 2017, the pair launched a small press together, named ”X Artists’ Books,” – which focuses on publishing artist-centered books that fit within and between genres. Grant said about their project:

”Some people are kind of dreamers who have a lot of ideas but don’t like to get things done.”

”I think we both like to have the idea and get it into the world.”

In June 2019, the two were spotted holding hands at the Saint Laurent Spring/Summer 2019 menswear show in NYC. Keanu is an ambassador for Saint Laurent.

In February 2020, she assisted the filming of “The Matrix 4” in San Francisco with Reeves, reported Metro.

”I went gray prematurely in my early 20’s and dyed my hair every color along the way until I couldn’t tolerate the toxicity of the dyes any more.”

Alexandra has exhibited at galleries, including:

She is a feminist. Grant said in an interview with Voyagela:

”I now know that the lack of opportunities I’ve experienced has little to do with my value and worth as an artist, but because of institutionalized and naturalized gender-based biases.”

”I have been told ‘not to show up pregnant’ at exhibition openings by other professionals and that my ‘work has less value’ because I’m a woman.”

Another world-renowned artist is Yayoi Kusama.

Grant earned most of her wealth from the art she created. In addition, Alexandra worked as a professor for several years and has a few projects with Keanu Reeves.

READ THIS NEXT: What is Molly Bloom doing now?