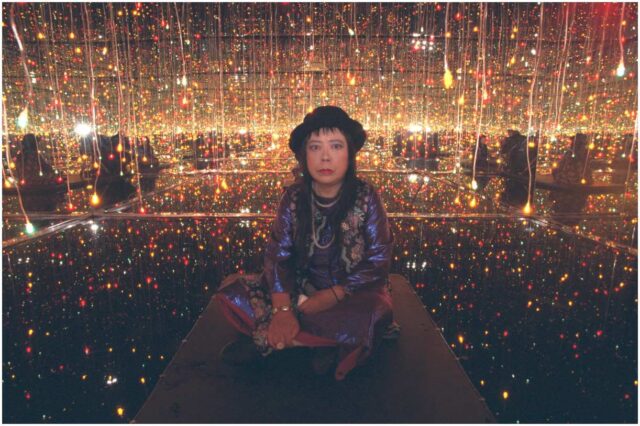 From an early age, Yayoi was prone to distorted perceptions of the world, vivid hallucinations (like pumpkins speaking to her), enhanced by shape and colors due to mental illness.

Kusama began painting when she was ten years old, as a way of escaping a childhood of neglect. Her mother was not supportive of her creative endeavors.

At age 13, Yayoi was sent to work in a military factory.

From 1948 to 1949, she studied Nihonga (a style of traditional Japanese painting that was inspired by the work of the Tang dynasty and influenced by the arrival of Chinese sumi ink painting) at the Kyoto School of Arts and Crafts.

In 1952, Kusama presented her first solo show in Japan.

In 1957, the artist moved to Seattle. There, Yayoi had an exhibition of paintings at the Zoe Dusanne Gallery. In 1958, she moved to New York City. Yayoi recalled in an interview:

“When I first arrived in New York, I went to the top of the Empire State Building.”

Kusama went on to say:

“Seeing the big city, I promised that one day I would conquer New York and make my name in the world with my passion for the arts.”

In 1959, she had her first solo show in New York at the Brata Gallery, where she showed Infinity Nets.

In 1965, she created the world’s first mirrored-room environment, a precursor to her Infinity Mirror Rooms, at the Castellane Gallery in NYC.

In 1967, she produced Self-Obliteration – a film exploration of her work. In 1968, the short documentary was awarded at the fourth International Festival for Short-Films in Belgium.

In 1970, she was arrested for obscenity when she organized a nude happening in Tokyo.

In 1977, Kusama checked herself into a psychiatric hospital in Tokyo. She later said:

“I was hospitalized at the mental hospital in Tokyo in 1975 where I have resided ever since.”

In the same year, Yayoi published a book of poems and paintings entitled 7.

In the 1980s, Kusama began incorporating pumpkins into her prints, drawings, and dot-motif paintings.

In 2000, she received the Education Minister’s Art Encouragement Prize and Foreign Minister’s commendations. In 2001, she was awarded the Asahi Prize.

In 2003, Kusama released ”Infinity Net: The Autobiography of Yayoi Kusama.” The book offers a glimpse into Yayoi’s exhilarating world.

In 2012, she had a collaboration with Louis Vuitton.

On October 1, 2017, a museum dedicated to her work, Yayoi Kusama Museum, opened in Tokyo.

In January 2019, she made her Las Vegas debut with two works that fill entire rooms at the Bellagio Gallery of Fine Art.

Kusama’s obsession with the pumpkin is rooted in her own childhood memories of growing up in Japan. Yayoi wrote in her autobiography:

“The first time I ever saw a pumpkin was when I was in elementary school and went with my grandfather to visit a big seed-harvesting ground.”

“And there it was: a pumpkin the size of a man’s head . . . It immediately began speaking to me in a most animated manner.”

In a 2015 interview, Yayoi confessed:

“I love pumpkins, because of their humorous form, warm feeling, and a human-like quality and form.”

“My desire to create works of pumpkins still continues. I have enthusiasm as if I were still a child.”

Kusama has coped with severe psychological difficulties since she was a young child.

She is also both repulsed and fascinated by sex. She said in a 2005 interview:

“I grew up hearing repeated lectures about the dangers of making friends with the impure opposite sex.”

“My phobia of men and my obsessive fear of men became increasingly severe, resulting in my extreme fear of anything phallic. It reached the point where I was assaulted by countless phallic visions.”

She considers herself asexual. Kusama also said that art is what saved her life. In her words:

“If it were not for art, I would have killed myself a long time ago.”

In a 2017 interview, Kusama said about her mental health:

“The art world in Japan ostracized me for my mental illness. That is why I decided to leave Japan and fight in New York.”

”I don’t have much need for possessions.”

”In my decades of work, I have always thought of humankind’s love and world peace.”

”I integrate my philosophy about the eternity of inter-relationships into my artworks.”

”I would confront the spirit of the pumpkin, forgetting everything else and concentrating my mind entirely on the form before me.”

”I am always happiest when I am making my art.”

”In this universe, the moon, the sun, each and every star, my own life, your life, they are all a single polka dot among billions.”

”It is my wish to leave a message to the whole world from the universe, a message of love and peace to the people of the world.”

During the Vietnam War, Yayoi wrote to Richard Nixon. She wrote:

“Let’s forget ourselves dearest Richard and become one with the Absolute, all together.”

Kusama is mentioned in the lyrics of the Le Tigre song “Hot Topic.”

Yayoi also wrote a letter to the president of France. She wrote:

“Dear Sir, I would like to see your country, France. Please help me.”

Kusama earned most of her wealth from the art she created. Her work is held in museum collections worldwide, including:

Currently, Yayoi holds the record for the most expensive artwork sold at auction by a living female artist at $7.1 million for White Net No. 28.

Therefore, Japanese contemporary artist Yayoi Kusama has an estimated net worth of $20 million.

READ THIS NEXT: Who is Molly Bloom?