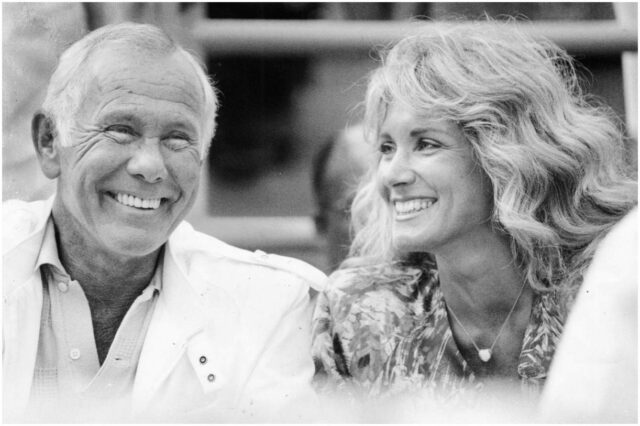 What is the net worth of Alexis Maas?

Alexis Maas is an American socialite and the fourth wife of Johnny Carson, a comedian who was the host of The Tonight Show from 1962 to 1992.

There is no information regarding her parents, studies, or anything before she got married to Carson, except the fact that Alexis was a former stock brokerage employee.

Note – Carson was an American television host who received a Kennedy Center Honor in 1993 and the Presidential Medal of Freedom in 1992 (Carson served in the Navy during World War II). In 1987, Johnny was inducted into the Television Academy Hall of Fame.

In 1985, he received a Peabody Award. He also received six Emmy Awards during his career.

He is best known as the host of The Tonight Show Starring Johnny Carson.

According to reports, Carson first met Alexis when he saw her walking along the beach near his Malibu home holding an empty wine glass. Carson left his house and offered to fill her glass.

The two married in a ceremony officiated by Judge William Hogaboom. The only witness to their wedding was Johnny’s brother, Dick.

During their honeymoon, Carson was heard telling Alexis:

”We’ve been married for three weeks. If you say something like that again, this marriage won’t last another three weeks!”

During an interview, Carson said about marriage:

In another interview, Johnny confessed:

”My giving advice on marriage is like the captain of the Titanic giving lessons on navigation.”

Carson and Maas’s marriage lasted until his death on January 23, 2005.

He died from respiratory failure arising from emphysema at Cedars-Sinai Medical Center in LA.

In addition to Alexis, he was married three more times.

On August 17, 1963, Johnny married Joanne Copeland. They divorced on June 21, 1972. She received a settlement of $6,000 per month in alimony until Johnny’s death or until she remarried.

On September 30, 1972, Carson married Joanna Holland. As compensation for his many indiscretions during their marriage, Holland received gifts from Carson, from diamonds to a Rolls-Royce Corniche, to an apartment at The Pierre. The pair divorced on August 30, 1985. She received a settlement of $20 million in property and cash.

Fact – His mother died in 1989. Johnny didn’t attend the funeral. According to Buffalo News, Carson told his lawyer that ”the wicked witch is dead.”

Before she has met her husband, Alexis was a stock brokerage employee. But, most of her net worth is from her husband. At the time of his death, Johnny Carson had a net worth of $300 million.

When Carson died, the comedian left about $150 million to his wife and $150 to his charity, The Johnny Carson Foundation.

Maas received a 14,000 square foot mansion in Beverly Hills as well as a 16 bedroom, four-acre ocean-front compound in Malibu. In 2007, she sold both properties for $15 million and $40 million.

The house in Malibu was sold to film producer Sidney Kimmel and his wife. In 2017, Parade reported that the Kimmels have put the house on the market for $81.5 million.

Therefore, American heiress and socialite Alexis Maas has an estimated net worth of $160 million.

In the present day, there is no news regarding Maas – she has managed to keep a low profile.

READ THIS NEXT: Who is Heimo Korth?