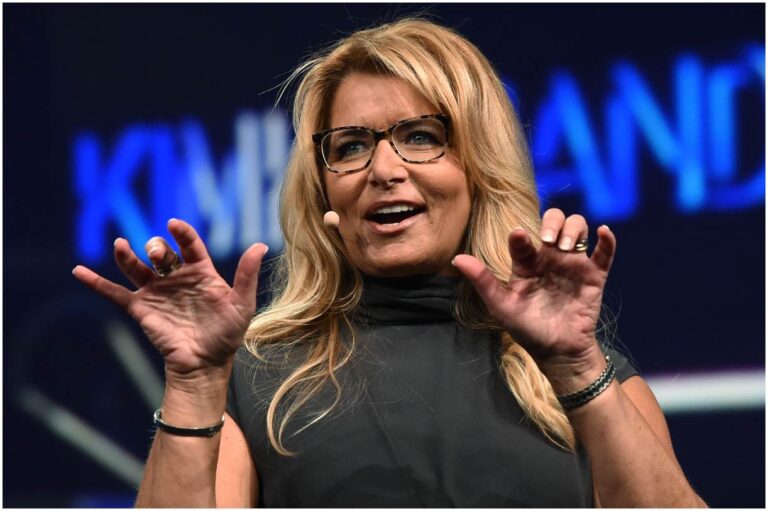 She was born on July 1, 1967, in Watchung, New Jersey. “Komando” is her actual last name, and is Russian-Ukrainian. She has an American nationality and belongs to white ethnicity.

Kim has a brother named Richard and two sisters named Kathleen and Christine.

Her mother, Virginia, was a Senior Systems Analyst with Bell Laboratories. Her father, Richard “Dick” Paul served in the Army during the Korean War and was a management employee for United Airlines.

In 1978, Kim graduated from Watchung’s Valley View School. After, she attended a private high school for girls, Mount St. Mary Academy, where, in 1981, she was elected to the McAuley Chapter of the National Honor Society.

After graduating from high school in 1981 (1 year ahead of schedule as a Junior), Komando went on to attend Arizona State University. While in school, Kim trained people to use their computers.

In 1985, she graduated from Arizona State University School of Business with a Bachelor of Science degree in Computer Information Systems.

Komando started out in sales, working for AT&T, IBM, and Unisys. At Unisys, she sold mainframe systems.

In the mid-1990s, Komando started the WestStar TalkRadio Network with her husband Barry Young. The Phoenix-based company syndicates radio programs such as:

In 2001, she was awarded the Arizona State University College of Business and SRP Spirit of the Enterprise Award.

In 2009, Komando was an invited speaker at Fortune Magazines’ Most Powerful Woman Summit – and was even the answer to a question in Trivial Pursuit.

In 2016, Kim ranked 29th in Talkers Magazine’s “Heavy Hundred,” their ranking of the 100 most important radio hosts.

In April 2016, Komando was the keynote speaker at the NAB Show Radio Luncheon to an audience of industry leaders.

In January 2017, Kim was appointed to Forbes Magazine Tech Council.

Komando nominated to the National Radio Hall of Fame in 2020.

USA Today is an internationally distributed American daily newspaper that serves as the flagship publication of its owner, the Gannett Company. Kim has been a columnist for USA Today since February 2002.

”The Kim Komando Show” is broadcast and syndicated on 435 radio stations in the US and two stations in Ontario, Canada to an estimated 2.5+ million listeners. On a busy Saturday morning, the show can receive 50,000 calls an hour.

Kim said about the show:

“It’s not about techies and computer-troubleshooting anymore. It’s now about a lifestyle – the lifestyle of a digital age.”

According to a 2006 report, Kim’s weekend program reached a weekly cume of 2.25 million. Furthermore, her shows are also heard internationally on the Armed Forces Radio Network covering 177 different countries and every ship at sea.

On January 5, 2019, her TV show premiered globally on Bloomberg TV.

Kim Komando is married to Barry Young, who owns an Arizona-based WestStar TalkRadio Network, that distributes the Kim radio program. He is also the host of ”The Nearly Famous Barry Young Show,” a local radio show on KFYI in Phoenix.

Komando is an avid car collector and owns a:

Kim runs marathons, is a certified scuba diver, and loves to cook.

Her website, Komando.com, reaches over 3 million unique readers each month and her tech-focused newsletters are distributed to more than 45 million subscribers every month.

She has appeared on CNN, MS NBC, ABC, CBS, BBC, and Fox News, and her syndicated columns appear in USA Today.

Komando splits her time between her homes in Hawaii and Arizona. Kim has full broadcast studios in both locations.

“Obviously even before the events of September, the industry was in an interesting place and everyone was hurting a little bit in terms of attendance. But we felt we’ve tracked pretty well.”

”MySpace is becoming part of the scene at school, so it’s only going to increase as kids head back to school. Now the cliques are moving online.”

“It has opened our eyes and minds to possibilities. Now that we’re not tied to offices and wires and poles, now what can we do?”

”That’s why you need to set up a free Google Alert. This service sends you an email when your name, or other information you choose, pops up online.”

“It is clear that the judge is concerned not to stop the technology completely but to try and work some middle line.”

Komando made most of her wealth by starting WestStar TalkRadio Network with her husband. In addition, she developed computer training tapes, that Kim sold via an infomercial. Over 150,000 tapes were sold for $80 to $120 each. Also, Kim has published numerous books that are being sold on Amazon. Just her car collection is estimated to worth around $1.5 million. Therefore, Kim Komando has an estimated net worth of $18.5 million.

READ THIS NEXT: Who is Dyrus?