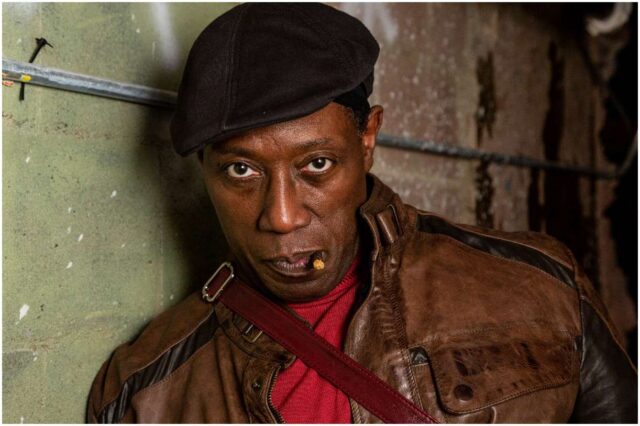 Wesley Snipes is an American actor who gave a remarkable performance in Passenger 57 and starred as the vampire killer in the Blade trilogy.

His other notable films include The Expendables 3, The Art of War, Rising Sun, Unstoppable, and Major League.

Snipes was raised in the Bronx, New York, by his mother – Maryann Long Snipes, who was a teacher’s assistant, and his father, Wesley Rudolph Snipes, an aircraft engineer who was a veteran in the US Air Force.

Wesley made his film debut in the 1986 movie “Wildcats” starring Goldie Hawn.

Before making his feature film debut, Snipes had a job installing telephones.

In 1987, Wesley was featured in the movie titled – ”Critical Condition.”

Since then, Wesley has played in many films, such as:

In 1998, he had his largest commercial success with the movie – ”Blade.” It has grossed more than $150 million worldwide.

”Blade” is the first film in the Blade franchise. It was followed by two sequels, ”Blade II” and ”Blade: Trinity.”

During an interview, Snipes said:

”I have a great deal of fun playing Blade.”

Wesley went on to say:

”The lifestyle of it, the controlled rebelliousness, is wonderful to me. And it’s therapeutic, too.”

In 1998, he received a star on the Hollywood Walk of Fame at 7018 Hollywood Boulevard in Hollywood, California.

The character of Raven from Tekken 5 was modeled after Snipes.

In 2008, a jury convicted Wesley of willfully failing to file tax returns for 1999, 2000, and 2001. The prosecution blamed Wesley for following the advice of both his accountant and an anti-tax proponent firm.

The government said Wesley should have paid $2.7 million in taxes on his $13.8 million income.

During his tax invasion case, Wesley lost his New Jersey mansion that had an estimated worth of about $8 million.

With his second wife, he has four children (three sons and a daughter):

”I never really planned on making action films. It just kind of happened.”

”Certain roles are more challenging than others, but I haven’t come across one yet that I can’t tackle.”

”May the Great Mother and Great Father guide, protect, and select you for long-lasting health, wealth, and prosperity.”

“If ‘Blade 4′ comes along, that is a conversation we can have. And there are other characters in the Marvel universe that, if they want to invite me to play around with, I am with that too.”

”I have a whole other side that has yet to be seen on screen.”

”I don’t have bad blood with any man or woman.”

During the September 11 attacks, his apartment was destroyed by the collapse of the World Trade Center’s Twin Towers. Snipes was on the West Coast at the time.

In the late 1990s, Wesley and his brother started a security firm that is dedicated to providing celebrities with bodyguards who are trained in martial arts and law enforcement.

In 1991, Snipes was chosen by People magazine as one of the 50 Most Beautiful People in the World.

In 1997, Wesley won the Best Actor Volpi Cup at the 54th Venice Film Festival for his role in New Line Cinema’s One Night Stand.

In 1994, he led a Florida state trooper on a 120mph high-speed chase, that ended with Snipes crashing his motorcycle.

Snipes earned most of his wealth from starring in 70 movies and TV series, including – Paper Empire, The Expendables 3, and Unstoppable.

He is famous for his roles in a series of action movies starring as a half-vampire, half-human who protects other humans – ”Blade,” ”Blade II,” and ”Blade: Trinity.”

Therefore, American actor Wesley Snipes has an estimated net worth of $12 million.

READ THIS NEXT: Who is Stephen Furst?