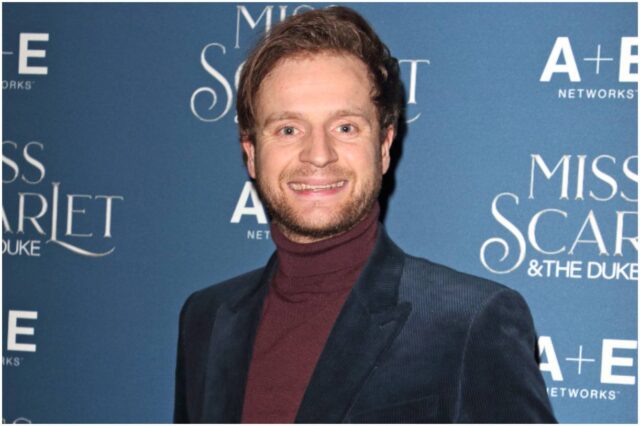 What is Andrew Gower’s net worth?

Andrew Gower is a British actor and singer/songwriter who has played a role in the BBC drama, Being Human, and a role in the ITV television series Monroe.

In addition, Gower is known for his appearances in  the BBC’s “The White Queen” and E4’s “Misfits.”

Since his school days, Andrey has been acting and singing in his own band, ”Emerson,” with his friend Michael Collins. In 2006, Alasdair Ramsey (bass) and Todd Ryan (drums) joined the band. They played gigs in North West England, a few times at The Cavern Club (a center of the rock and roll scene in Liverpool in the 1960s).

When Andrew left to attend the Oxford School of Drama the following year, he had to put his music career on hold, with every intention of getting the band back together at a later point. But, this never happened, and the band eventually dissolved.

Andrew acted as Emerson’s lead vocalist and Michael as a keyboard and guitar player. From the beginning, the two friends wrote their own songs inspired by their favorite artists.

At some point, Gower enrolled at the Oxford School of Drama (it is the only professional drama school in Oxfordshire), from which he graduated in 2010. While studying for his A-Levels, Andrew joined a drama group. In 2010, he won the Spotlight Prize.

During an interview, Gower said:

”I wanted to be a footballer until I was 17 and then one day my mother one day said, “I think you should stop” she looked at me thinking “this is not gonna work.”

”And then I had an amazing drama teacher who invited me to play Fagin (“Oliver Twist”) in a show, and then I kind of had the same buzz of playing football from acting.”

In March 2011, Gower made his debut in Monroe (a British medical drama television series that was produced by Mammoth Screen for the ITV network and written by Peter Bowker ), in the role of a heart surgeon in training, named – Dr Andrew Mullery.

Andrew appeared in both series, reprising his role as the newly promoted General Registrar, under Head of Clinical Services Alistair Gillespie, in the 2nd series. To research the role, he watched two coronary artery bypass surgeries while standing next to actual surgeons.

In 2012, he had a run as Seiffert in Manfred Karge’s surreal play The Conquest of the South Pole at the Arcola Theatre and a guest role in series 4 of E4’s science-fiction comedy Misfits.

In the same year, Andrew joined the cast of Three’s Being Human (a British supernatural comedy-drama television series), as vampire solicitor Nick Cutler, in series 4 of the television series. The actual filming for Three’s Being Human began in late July 2011 in Barry, Wales, and was broadcast in 2012. Andrew was the recipient of critical praise for his work on the series.

After a cameo in Showtime’s The Borgias, Andrew appeared as Lord Strange in a few episodes of the BBC’s mini-series The White Queen.

During an interview, Gower declared:

”Being an actor, for me, is finding people who have a similar imagination or creativity to you and you come together and you are literally like little boys and little girls playing dress up and filming it or in front of an audience.”

In 2013, he appeared in one episode of The Borgias, a historical-fiction drama television series that was created by Neil Jordan.

In 2014, Andrew appeared in series 2 of ITV’s crime drama Endeavour as Nicholas Myers, as well as in series 2 of the BBC’s drama The Village as Gilbert Hankin. That same year, Andrew was featured in Jon Stewart’s film directorial debut, Rosewater, as Jimmy the Avid Editor.

In 2015, he became involved in the music project The Gustaffsons who have recorded 4 of their songs and published them on SoundCloud.

In the same year, he was cast in the role of a young banker in the Emmy awarded series Capital (the story follows the impact of gentrification in a city, especially focusing on a fictional Pepys Road in South London), based on John Lanchester’s novel of the same name as well as in the role of Caligula in A.D. The Bible Continues (tracks events following the crucifixion of Christ, when many of his associates, including key political/religious figures and his mother, are instantly altered), and he played Mark.

In 2016, Andrew appeared as Prince Charles Stuart in series 2 and 3 of the Starz series Outlander, a drama television series that is based upon author Diana Gabaldon’s historical time travel book series.

Furthermore, he made his West End debut as Winston Smith in a theatrical adaptation of G. Orwell’s 1984, a dystopian look at life in the future, at the Playhouse Theatre in London.

In 2013, Gower appeared as Sherlock Holmes in series 6 of CBC’s Victorian drama Murdoch Mysteries and would later reprise his role in series 7.

In the present day, Andrew is working on his first documentary, an in-depth look at Merseybeat musician Tommy Quickly, with friend and fellow actor Stephen Walters.

He is a self-described “obsessed” Beatles fan.

Gower earned most of his wealth from appearing in numerous movies in television series, such as – Black Mirror, Capital, Outlander, A.D. The Bible Continues, The Village, The White Queen, Carnival Row, The Borgias, Misfits, or Being Human.

Therefore, English actor Andrew Gower has an estimated net worth of $6 million.

READ THIS NEXT: Rose Marie