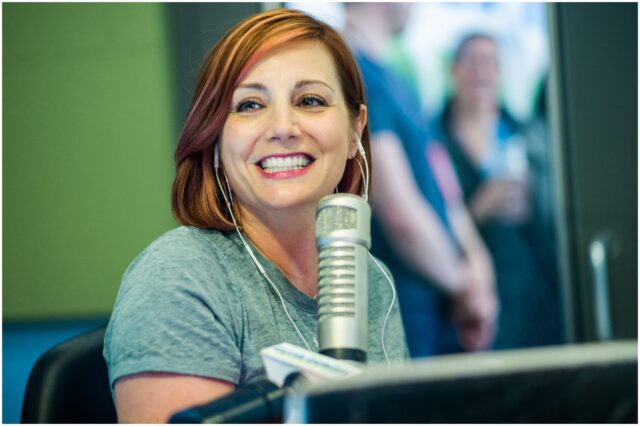 Danielle Monaro is a co-host of the morning talk show Elvis Duran and the Morning Show (formerly known as The Z Morning Zoo) – an American syndicated weekday morning radio program that is hosted by Elvis Duran.

Duran’s show is currently rated the most-listened-to the Top 40-morning program in the country.

As a member of Elvis Duran and the Morning Show’s host group, Danielle Monaro has done the morning show horoscope segment.

Monaro went to an open school where she has enjoyed co-curricular exercises such as article writing, address, discourse competition, and debate.

In 1995, she graduated from St. John’s University, a Vincentian and Catholic university that prepares students for professional and personal success in today’s global society.

During an interview, she stated:

“I fell in love with St. John’s. I didn’t apply to any other colleges. I knew I wanted to go here.”

Soon after graduating, Danielle received an internship at Z100 (Owned by iHeartMedia), a Top 40 radio station that is licensed to New Jersey, Newark, and serving the New York metropolitan area.

“To be honest, I had no interest in radio at all. I started doing news and I never left the radio station…I just fell in love with radio.”

She was responsible for the Entertainment Minute and the show’s horoscope segment.

Danielle Monaro has been married to Sheldon Neal since March 15, 2003.

The couple has two children. In 2005, they welcomed their first son, Spencer, and in 2009, their second son, Preston.

On March 28, 2002, her husband Sheldon Neal proposed to her live on the radio during the ”Elvis Duran and the Morning Show.”

In 2017, she ran a charity run hosted by Women’s Health in partnership with FEED and Macy’s.

”It shows that when we all come together women can do anything. We can inspire and empower.”

Danielle has created the “Entertainment Minute,” which consists of a brief update on the entertainment news of the day.

Monaro and her husband are obsessed with Halloween.

Their house is always decked out with spooky pillows, characters, outdoor decor and more by October 1st.

On Wednesday, Oct. 2, 2013, she spoke to students in the D’Angelo Center about her career, her time at St. John’s, and her advice to budding professionals.

In July 2019, she was named Bergen County’s first ambassador.

READ MORE: What is the net worth of Craig Tester?

“Every year I say ‘I can’t believe how big my boys are getting!’ It’s soooo crazy how fast it goes.”

”In life, you meet many people. Some people are so special that they touch your life in an amazing way.”

Danielle’s salary was not released to the public, but it is thought that she has a salary of around $75,000 per year. This is higher than the national average salary for a Radio Personality, which is around $60,000 per year. Therefore, talk show host Danielle Monaro has an estimated net worth of $1 million.

READ THIS NEXT: Jared Outlaw Biography