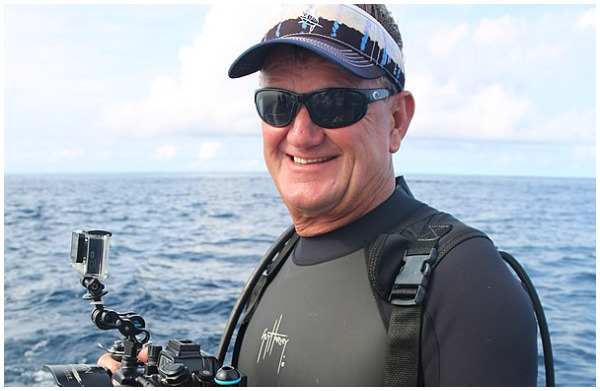 Guy Harvey is a German-born Jamaican nature enthusiast who is best known for his paintings of aquatic animals as well as for his marine conservation work.

He was born on September 16, 1955, in Lippspringe, Germany to a family of British heritage. Harvey spent the majority of his childhood in Jamaica.

Growing up in Jamaica, he spent many hours diving and fishing with his father along the Island’s south coast. In his words:

”I grew up in southwest Jamaica, where my parents farmed beef cattle. They also had a small beach cottage on the coast at Belmont.”

”Each time I was at home on school holidays I went fishing with my parents or a local charter boat captain.”

“Mum was a very keen horse rider … we went on rides every day.”

”She was a naturalist; she loved pointing out birds and teaching us to learn the names of birds and flowers and plants, and I appreciated that from very early on.”

He earned an honors degree in Marine Biology from Aberdeen University. In addition, Guy received his doctorate in Fisheries Management from the University of the West Indies. Guy also became a professor of fisheries biology for a short time.

In 1985, Harvey depicted Ernest Hemingway’s famous fishing story The Old Man & the Sea through a series of 44 original ink and pen drawings.

In January 1987, both of his legs were severely injured by a boat propeller, leaving him unable to walk for about 12 months.

In 1999, he formed the ”Guy Harvey Research Institute” at the Nova Southeastern University in Florida. The mission of the institute is to provide the scientific information necessary to conserve, understand, and effectively manage the world’s marine fishes.

GHRI scientists, collaborators, and students are conducting many different research projects, including:

In 2001, Harvey released Santiago’s Finest Hour (with permission from the Hemmingway family), a compilation of 56 pen and ink drawings.

“Nova Southeastern University has had a long-standing relationship with Dr. Harvey, and we’re thrilled that will continue for many more years to come.”

“His generosity is ensuring today’s leaders in marine sciences teach and pass on their expertise to tomorrow’s researchers. I am very pleased that Guy Harvey is putting his name – literally – on the growing legacy of our Oceanographic Center.”

In May 2019, his foundation received a 300,000 US dollars donation in support of shark genomic work being done at the GHRI. The donor said in a statement:

“It is my great honor to help support the GHOF shark genomic research.”

According to a statement from the institute:

Guy’s thoughts about the process of painting the hull:

”one of the most moving experiences of my life and the greatest artistic achievement I’ve ever had.”

Spanning over 1,000 feet in length from bow to stern, the custom-designed artwork features a scene of marine wildlife, that blends 2 underwater seas seamlessly.

“We’re honored to continue our relationship with Guy Harvey, as one of the leaders in conservation education.”

”To further showcase the importance of preserving the beauty and well-being of marine life for future generations to enjoy.”

His wife is the daughter of a respected and well-known racehorse breeder in Jamaica. They had started dating in 1984.

In 2013, he was inducted into the ISDHOF in recognition of his contribution to the growth and success of recreational scuba diving.

When asked about what the average person can do to ensure the future health of our oceans, Guy responded:

In January 1988, Guy survived a shootout in a home invasion. Due to personal security concerns over the high crime rate in Kingston, he moved his family from Jamaica to the Cayman Islands in the following year.

Harvey earned most of his wealth from his original pen and ink drawings. In addition, he sells fish-emblazoned T-shirts as well as Harvey-decorated sandals, posters, dog collars, doormats, cell phone covers, and coffee mugs. For instance, his T-shirts cost between $15 and $30.

Moreover, he owns The Guy Harvey Magazine, an award-winning magazine that is published quarterly and was launched in 2010. Guy has two books currently in print which also bring some revenue. Therefore, Guy Harvey has an estimated net worth of $1.2 million.

READ THIS NEXT: David Baszucki & Roblox