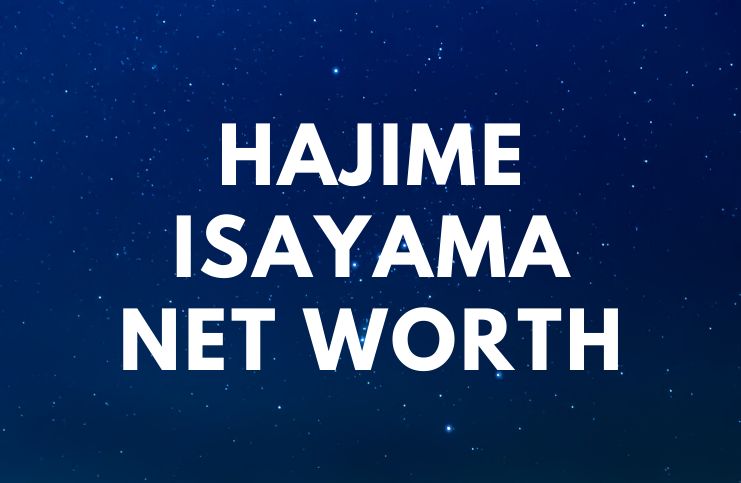 Hajime Isayama is a Japanese manga artist who is best known for his ”Attack on Titan” manga series, which had become one of the best selling manga series of all time with more than 90 million copies in circulation.

In 2011, Isayama was the recipient of the prestigious Kodansha Manga Award.

He was born August 29, 1986, in Oyama, a town that is located within the city of Hita in Japan’s Ōita Prefecture.

Hajime moved to Tokyo at age 20. There, he started to work at an Internet café in order to pursue a career in manga.

The rough outline of the story ”Attack on Titan” manga series is like this – in a world where Titans stride, humans live in fear behind immense walls. One day, a part of the wall was breached by a Titan. A hundred years of peace at its end. Soon, he let other Titans invade inside the wall.

By the end of season 3, Eren’s Fabled basement was explored, and the truth about the world was released to the public. The 3rd season of Attack on Titan is most likely the most successful season to date from the manga series.

Season 4 digs deeper into the history of the Titans and the power they hold.

According to chapter 122, the first Titan was a young slave girl who was ruled by the Eldians. Also, the lead character ends up joining the military with his two childhood friends after the Titans break through the wall.

According to an ”Attack on Titan” manga series fan on Reddit:

“‘Attack on Titan’ is no typical Shōnen manga where good guys rarely die.”

”In it, the villains more often than not win and every rare victory for the protagonists will often cost them dearly, so that they can’t even experience the joy of celebration, that’s what appeals to me.”

The first tankōbon collected volume of the manga series was released on March 17, 2010.

On November 1, 2014, a special ”Attack on Titan” event was held in Hita, with Hajime and around 2,500 spectators attending.

”Attack on Titan” was adapted into a two-part live-action movie and an anime series.

The Japanese documentary program Jōnetsu Tairiku aired an episode about Hajime’s struggles to complete the ”Attack on Titan” manga series.

Isayama got married in 2018. The name of his wife was not released to the public. He announced the wedding on his blog. He wrote:

“By the way, if I can take a moment to talk about myself, this year I got married.”

”From now, with my significant other, I want to devote myself even more to being a manga creator!”

“Someone who cannot abandon everything cannot achieve anything.”

”I don’t actually know much about tokusatsu stuff; I’m just vaguely drawn to the idea of it.”

”When writing storyboards in my case, I can’t draw if it’s not silent.”

“Once I’m dead, I won’t even be able to remember you.”

“The world is merciless, and it’s also very beautiful.”

”I knew that making a living from drawing manga is extremely tough, so my dream back then was just to make enough to feed myself with my manga.”

“The only thing we’re allowed to believe is that we won’t regret the choice we made.”

On June 12, 2015, the Chinese Ministry of Culture forbade the distribution of manga series – ”Attack on Titan.”

The South Korean Electronic Times magazine accused Isayama manga series of having a militaristic message which serves Shinzō Abe’s political leanings (a Japanese politician who has been Prime Minister of Japan).

Many Titans in Chapter 96 resemble various Game of Thrones characters.

In 2013, Hajima’s blog received thousands of repeated threats that the author would be physically assaulted. Some believe it is because Hajima based one of his manga series’ characters – Dot Pixis, that looks similar to Yoshifuru Akiyama, a general in the Imperial Japanese Army.

In 2013, the resort Bungo Oyama Hibiki no Sato in Ōyama (his hometown) ran a free exhibit displaying copies of Hajima’s manuscripts for ”Attack on Titan.”

In 2011, his manga series was awarded the 35th Kodansha Manga Award in the Shōnen category.

Other famous manga artists include:

Isayama earns most of his wealth from the manga series – ”Attack on Titan.” His books have sold over 90 million volumes worldwide and have been translated into multiple languages including – German, Mandarin, and English.

According to reports, Hajime has an annual income of around $8 million. However, he has plenty of expenses, like – assistants, rent, and taxes. Therefore, Hajime Isayama has an estimated net worth of $11.5 million.