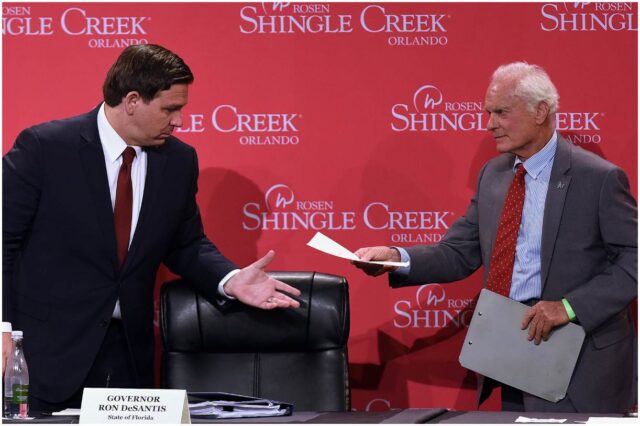 Harris Rosen is an American Jewish philanthropist, investor, and businessman who founded Rosen Hotels & Resorts in 1974.

He is legendary for his philanthropic work in the community as well as for his generosity with associates.

From a young age, Rosen aspired to enter the hotel industry. He said:

In 1961, he received a Bachelor of Science degree from the School of Hotel Administration at Cornell University. Harris became the first person in his family to go to college.

After college, Rosen served three years in the US Army in South Korea and Germany.

After he left the US Army, Rosen completed the Advanced Management course at the University of Virginia’s graduate school of business on a Hilton Corporate Scholarship.

He began his career at the Waldorf Astoria in NYC as a convention salesman. In addition, Rosen worked at other hotels including the New Yorker Hotel and various Hilton Hotels. Harris eventually joined the Walt Disney Company as director of hotel planning.

His bosses at Walt Disney World told him that they didn’t believe he would ever become a company man. Soon, Rosen was fired.

During an interview, Harris confessed:

“I finally came to the conclusion that I most likely didn’t have the organization man’s personality.”

Harris went on to say:

”Deep down inside I knew that one day I was destined to be in business for myself.”

In 1974, Rosen acquired the bankrupt Quality Inn, with its buffet bar, on International Drive. Harris said:

“In two years, I went from unemployed and no money to owning two hotels.”

In 1993, he created the Tangelo Park Program to benefit an impoverished Orlando community.

In 2002, he donated $18 million to the University of Central Florida to develop the Rosen College of Hospitality Management. He said:

”I didn’t want to make a fuss out of the UCF donation. I was ready to just send a check in the mail.”

”But President Hitt implored me not to do it that way. He said, ‘Let us make an announcement. Let us use your name. If people hear that you’re doing something, it might encourage others to do something.’”

In 2003, he acquired 255 acres east of the Orange County Convention Center and began construction of a 1,501-room Rosen Shingle Creek.

On May 24, 2005, he received the President’s Award for the Tangelo Park Pilot Program from the U.S. Dream Academy in Washington, D.C.

A year later, Harris hosted the Water for Haiti gala at Rosen Plaza that funded over 200 water filtration devices.

On September 11, 2008, his hotel company received the Apex Award for healthcare accessibility.

On April 18, 2009, he was inducted into the Central Florida Hospitality Hall of Fame.

In 2011, Harris was named the Orlando Sentinel’s Central Floridian of the Year. In the same year, he raised more than $86,000 for earthquake and tsunami relief in Japan.

In 2016, Harris was awarded the Bob Graham Center for Public Service Citizen of the Year award for his work with Tangelo Park.

Later that year, Harris partnered with Rollins College, an arts college in Winter Park, to provide 3 annual scholarships to the school.

Also in 2017, he was honored by the Orlando Business Journal as the Philanthropist of the Year.

During his time at Waldorf Astoria in New York City, Rosen worked as an elevator operator. There he encountered numerous famous guests.

In 1948, his father introduced him to the most beautiful blonde lady he had ever seen. Rosen explained:

“He (Harris’ father) said, ‘Harris, I’d like you to meet Marilyn Monroe.’”

Rosen extended his hand for a handshake, however, Marilyn hugged him.

Harris Rosen is married to Trish.

In 2018, his son Adam lost the battle with his brain cancer. Harris declared:

“When he passed, I had long conversations with the physicians who took such good care of him, and what evolved was a new paradigm for finding cures and treatments for horrible diseases.”

“I was so intrigued by that new template that I thought I would offer my assistance.”

“Service is key. You could be the most technologically advanced company in the world, but if the service is terrible, you have nothing.”

”When you do the right thing, you’re rewarded for it.”

“We get involved in projects that are near and dear to us.”

Rosen earned most of his wealth from his hotel business. Rosen Hotels & Resorts are valued at more than $500 million, with over 4,550 employees and around 6,700 guestrooms.

Also, his company owns and operates eight hotels and resorts in the Orlando metropolitan area. Some of these resorts and hotels are – The Clarion Inn Lake Buena Vista, Rosen Inn International, Rosen Inn at Pointe Orlando, Rosen Plaza, and Rosen Centre.

Therefore, American businessman Harris Rosen has an estimated net worth of $190 million.

READ THIS NEXT: Who is Areva Martin?