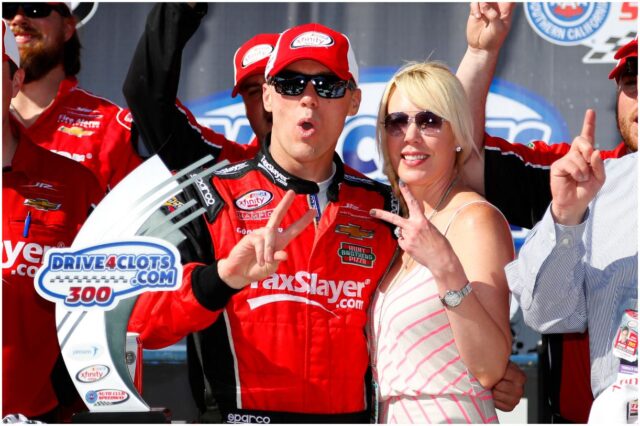 She is the wife of NASCAR driver Kevin Harvick.

”I think that anyone that’s been around her for a period of time realizes that.”

Harvick is the daughter of Joyce Linville and NASCAR veteran John Paul Linville. She once said:

“My dad was very old-school Southern, and girls didn’t belong behind the wheel.”

At age 3, she was already visiting race tracks. In her 20s, Harvick even tried her hand at racing, however, DeLana opted to head to college.

She graduated from the University of North Carolina at Greensboro with a degree in English.

Her first job was for Jeff Gordon’s Publicity Team. She said about the job:

“I came in doing hospitality, slinging bratwurst and waking up at four in the morning, giving pit tours and things like that.”

Kevin said about his wife:

”She has some stout opinions. That’s probably what makes it work so good.”

”We’re both very opinionated about how things should be. I guess we challenge each other to push each other.”

Since then, their team has fielded some of NASCAR’s greatest drivers, including:

After the wedding, DeLana said:

”I just married my best friend. I just want to be with Kevin.”

The two first met in 2000 during a race at Michigan International Speedway, a 2-mile speedway located about 4-mile south of the village of Brooklyn.

The couple established the Kevin Harvick Foundation, which participates in a variety of charity programs and projects.

Kevin stated about their foundation:

”DeLana and I want to provide opportunities to children who might not realize their potential and give them the courage to pursue their dreams.”

Note – Kevin Harvick is an American professional car racing driver who was the Busch Series Champion in 2001 and 2006. He began his NASCAR career in 1995. In addition, he is the third-winningest driver in Xfinity Series history.

On July 8, 2012, they had a son named Keelan. After the birth of their son, Kevin confessed:

”Miss Piper Grace joined the gang Thursday night! Everyone is healthy and we have an extremely excited big brother!”

DeLana says that she was practically born on the race track.

She was honored by The Hershey Company as one of four “Sensational Women” in 2006 for her support of breast cancer awareness.

In addition, she earns some money from selling a shirt that she created which says – ”I Wear the Firesuit in This Family.” Also, in the last year, DeLana and her husband sold two houses for a combined sum of $10.5 million. Therefore, DeLana Harvick has an estimated net worth of $18 million.

READ THIS NEXT: Who is Lais Ribeiro?