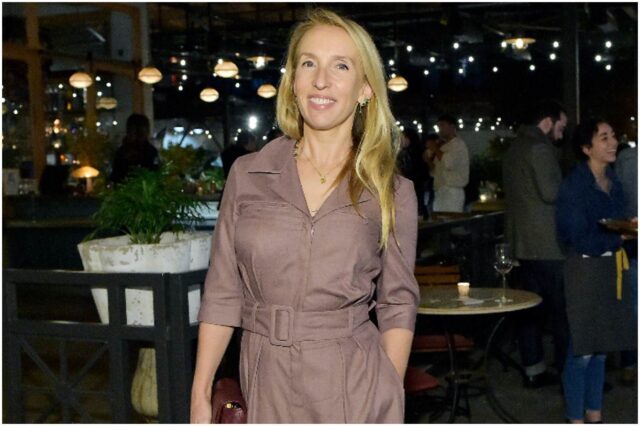 Sam Taylor-Johnson (birth name – Samantha Louise Taylor-Wood) is an English photographer and filmmaker who is known for her work on the short films titled ”Misfit” and ”Love You More.”

“Art was a way of reinventing myself.”

Her mother, Geraldine, is an astrologist and yoga teacher.

Her father moved out of the house when she was 9 years old.

In 1990, she graduated from Goldsmiths College.

In 1997, Taylor-Johnson won the Illy Café Prize for Most Promising Young Artist at the Venice Biennale.

In 2008, she directed a short film – Love You More – produced by Anthony Minghella and written by Patrick Marber.

A year later, she made her directorial feature film debut with her film titled – ”Nowhere Boy,” a biopic based on singer John Lennon’s childhood.

In September 2011, Taylor-Johnson collaborated with Solange Azagury-Partridge on the film named – ”Daydream.”

In 2011, Sam was awarded the Officer of the Order of the British Empire in Queen’s Birthday Honors List for her services to the Arts. In the same year, Taylor-Johnson directed the R.E.M. music video “Überlin.”

In 2016, Sam became a member of the Academy of Motion Picture Arts and Sciences (AMPAS).

In 2018, she wrote and directed – ”A Million Little Pieces,” a drama film based on the book of the same name by American writer and businessman James Frey.

“I lived it large for a little while, but I wasn’t happy in the glitzy-glamour, high-market, fancy living. That was a big lesson.”

After the wedding, Aaron confessed:

“I can’t dwell on what other people think or say. With Aaron it just literally felt like we were so connected, straight away.”

Note – Aaron Taylor-Johnson is an English film actor who was cast in Kick-Ass with Nicolas Cage.

In 2016, Aaron won a Golden Globe for his supporting role in the film – ”Nocturnal Animals.” In 2015, Taylor-Johnson appeared as Quicksilver in the blockbuster – ”Avengers: Age of Ultron.”

Sam and Aaron have received far more scrutiny than other celebrity couples due to their 23-year age gap. She said:

”If I gave a second thought to other people, I would be the unhappiest person, probably still in a miserable marriage.”

In June 1997, she gave birth to her first child at age 30, a daughter named Angelica Jopling.

In 1997, several weeks after giving birth to daughter Angelica, Sam was diagnosed with colon cancer.

In 2000, Taylor-Johnson was diagnosed with breast cancer. Later, she underwent a mastectomy, a surgery to remove all breast tissue from a breast.

During an interview, Sam confessed:

“The first time didn’t change my perspective. The second time, I changed everything.”

Taylor-Johnson went on to say:

”I went through all the treatments. I did chemotherapy. I lost hair. I did the mastectomy. And then I changed my diet, my world, my art.”

“It’s hard when you get two headstrong people with very powerful visions that are so different.”

”I’m still very close to a lot of my artist friends and I have a studio and I haven’t stopped making work.”

She is a longtime friend of Tom Ford, a London-based American fashion designer who currently serves as the Chairman of the Board of the Council of Fashion Designers of America.

Sam had numerous solo exhibitions, including:

“I wouldn’t be able to survive everything without the (Transcendental) meditation that I do.”

Taylor-Johnson earned most of her wealth from being a professional photographer and filmmaker. She is best known for directing Fifty Shades of Grey and A Million Little Pieces. Therefore, photographer Sam Taylor-Johnson has an estimated net worth of $21 million.

READ THIS NEXT: Nate Bargatze Net Worth