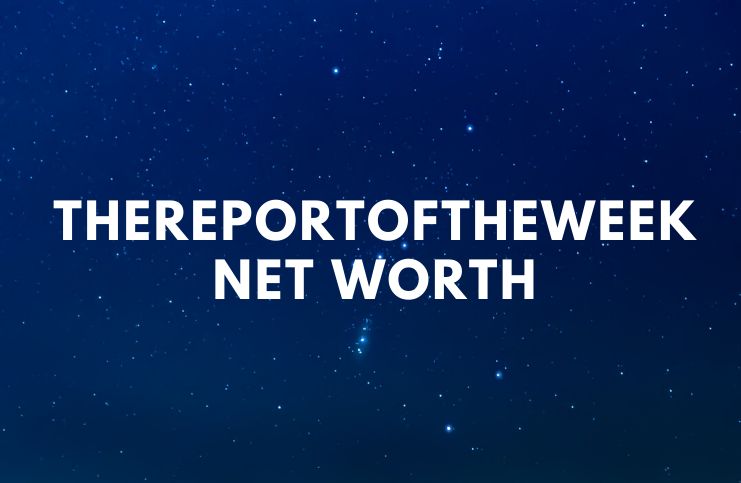 TheReportOfTheWeek (real name – John Jurasek), also known as Reviewbrah, is an American YouTuber, food critic, and podcaster who has over 2.12 million subscribers on his channel.

His YouTube video “Great Value Purified Drinking Water vs. Spring Water – Review” was his first to hit 1 million views. Currently, it has more than 1.5 million views.

”I produce regular videos and podcasts on a variety of topics – be that food reviews, an experience, philosophical discussion, talk-based or a video for a few laughs!”

Jurasek began producing weekly energy drink reviews (the first review was for a pomegranate-flavored 5-hour Energy drink) after creating his channel on February 20, 2011. This section was named “Energy Crisis.”

During an interview, John said:

”The idea came from watching this one guy on YouTube who did these pizza reviews.”

Jurasek went on to say:

”At the time I didn’t even have the intention of reviewing food. I just wanted to review energy drinks.”

READ MORE: What is Nate Bargatze’s net worth?

In the present day, his YouTube channel has over 187 million views and more than 2.12 million subscribers.

“I never expected to achieve a following, so these numbers are always unfathomable.”

”VORW Radio International” has been transmitted mainly by WRMI and WBCQ.

”My radio show is listener-funded but it is made through editing software.”

”I never thought it would be at where it is but it’s wonderful to see.”

John started a weekly podcast, called – ”The VORW International Podcast.” During the podcast, Jurasek leads a wide-ranging discussion, from social issues to moral and philosophical topics.

READ MORE: Meet The Teenager Who Made ”Unturned”

The podcast also has a YouTube channel, named – ”VORW Podcast.” The channel has over 51,000 subscribers.

Fake Reports About His Death

In 2017, John was falsely named among the missing people following the terror attack at an Ariana Grande concert in Manchester, UK.

Jurasek quickly released a YouTube video, titled – “I am alive.”

“This, unfortunately, was an effort done by various trolls and website users, certain website users, just to try and mislead the general public with fake news.”

John was mentioned once more in the wake of the shooting in Las Vegas that happened on October 1, 2017.

READ MORE: Who is Jamie Gangel?

There are no records of TheReportOfTheWeek’s girlfriend.

”While I greatly enjoy their beverages and baked goods (Starbucks), I also feel that they treat their employees well, and I highly respect the views of the company.”

”If there is such a thing as a kitty afterlife, I know he’s in a good place.”

“I always try to be positive, but I get disappointed time and time again.”

”Nothing like some chicken wings to start the day off.”

”I’ve noticed the popular chain Burger King go down in quality quite significantly over the years.”

“Man, this stuff hits the spot, I will tell you.”

He said about his favorite pizza:

”I enjoy pizza rather frequently, and I feel Pizza Hut did a very good job on this pizza (Double Cheesy Crust Pan Pizza).”

Despite maintaining a family-friendly disposition and vocabulary throughout his video, John was hit with a demonetization check on his YouTube video describing his lackluster customer experience with major American airline low-cost passenger carrier, JetBlue airlines.

When Jurasek was living with his parents his personal info was leaked online.

READ MORE: One of NASCAR’s Most Powerful Women – DeLana Harvick

During his videos, the food reviewer typically appears in a suit and a tie while eating some type of greasy fast food. Interestingly, John says that he wears similar clothing all the time.

Jurasek has been featured by numerous media outlets, including:

John was featured in an episode of Daniel Tosh’s Comedy Central series Tosh.0.

READ MORE: Who is Bjergsen’s girlfriend?

John earns most of his wealth from advertisements on his YouTube channel. Combined, his channels have over 187 million views, meaning $400,000 in revenue, before state taxes.

He also has 942 patrons on Patreon. In addition, he receives donations on Paypal and makes some money from his podcast and radio show. Therefore, YouTube personality TheReportOfTheWeek has an estimated net worth of $0.5 million.

READ THIS NEXT: Who is Sam Taylor-Johnson?