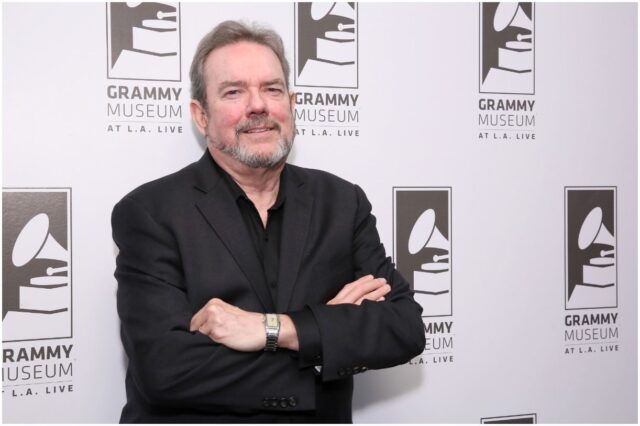 Jimmy Webb (birth name – Jimmy Layne Webb) is an American songwriter who is best known for hits such as All I Know, By the Time I Get to Phoenix, MacArthur Park, and Wichita Lineman.

Many of his hits achieved platinum status. For instance, his song “By the Time I Get to Phoenix” was the third most performed song between 1940 and 1990.

Webb was also the youngest man ever inducted into the National Songwriters’ Hall of Fame.

”I was born 11 miles from Erick, Oklahoma, where Roger Miller was born on old Route 66.”

His father, Robert Lee Webb, was a former member of the US Marine Corps and a Baptist minister.

By the age of 12, Jimmy was playing in the choir of his father’s churches.

His first recorded song was “My Christmas Tree.” It was performed in 1965 by American female singing group The Supremes on “Merry Christmas.”

In 1966, Johnny Rivers signed him to a publishing deal. In the same year, Rivers recorded his song “By the Time I Get to Phoenix” on his album, titled – ”Changes.”

In 1968, Jimmy formed his own production and publishing company, named – ”Canopy.”

In 1968, he released his debut album, entitled – ”Jim Webb Sings Jim Webb” on Epic Records. The album consists of several demo recordings, that are reorchestrated and redubbed by Epic Records without Jimmy’s consent.

In 1970, he released the album – ”Words and Music” on Reprise Records.

In May 1971, Webb released his third album, titled – ”And So: On” on Reprise Records. Rolling Stone wrote about the album:

“Another impressive step in the conspiracy to recover his identity from the housewives of America and rightfully install him at the forefront of contemporary composers/performers.”

Bruce Eder, a journalist and critic, called the album the:

“most surprising, diverse, and possibly the most satisfying of all of Jimmy Webb’s early solo LPs.”

“his most polished effort yet as a performer.”

In 1987, he produced the soundtrack for the film – ”The Hanoi Hilton.”

In 1994, Jimmy teamed with American singer Nanci Griffith to contribute the song – “If These Old Walls Could Speak.”

In 2011, he was elected Chairman of the Songwriters Hall of Fame.

In 1998, he published a book, titled – ”Tunesmith: Inside the Art of Songwriting.”

On May 5, 2017, Webb released another book, named – ”The Cake and the Rain: A Memoir.” The book sparked some controversy because Jimmy didn’t mention his first wife.

“It’s shocking. If you are going to be honest in a memoir, how do you leave out your wife and kids?”

On July 14, 1974, Jimmy Webb married Patsy Sullivan, a model-cover girl. The two first met while posing for the cover of Teen when Patsy was 12 years old.

From 1996 to 2011, Laura was Vice President of Marketing and Communications at a PBS station in NYC.

Jimmy has 6 children (5 sons and a daughter) with his first wife, Patsy. His ex-wife was 16 when she gave birth to their first son. Two of Jimmy and Patsy’s sons formed a rock band, named – ”The Webb Brothers.”

”In order to survive, I created my own little world where I played the piano.”

“I normally would say that I don’t regret anything I’ve done in the passage of my life, because every negative experience has its alternative universe of learning.”

”I like words. I like the way they clash around together and bang up against each other, especially in songs.”

“I can remember hearing Frank Sinatra, Mr. Sinatra, sing one of my songs on the radio.”

”I carry a Macbook Air everywhere I go, but I think the bane of computer science is that it’s allowed us to make perfect records.”

Webb composed the scores and the soundtracks for the following films and TV shows:

Jimmy worked with some of history’s most popular singers, including:

Webb has been awarded 3 Grammys for:

He is the only artist ever to have received Grammy Awards for orchestration, lyrics, and music.

Webb is also a recipient of both the Lifetime Achievement Award and the Johnny Mercer Award from the Songwriters Hall of Fame.

Webb earned most of his wealth from composing and writing music for other musicians or movies and TV shows. He also released 13 albums and two books. During an interview, Webb said – ”One morning, when I was only twenty, I woke up with a million dollars.” Therefore, Jimmy Webb has an estimated net worth of $11.5 million.

READ THIS NEXT: Who is Borgore?