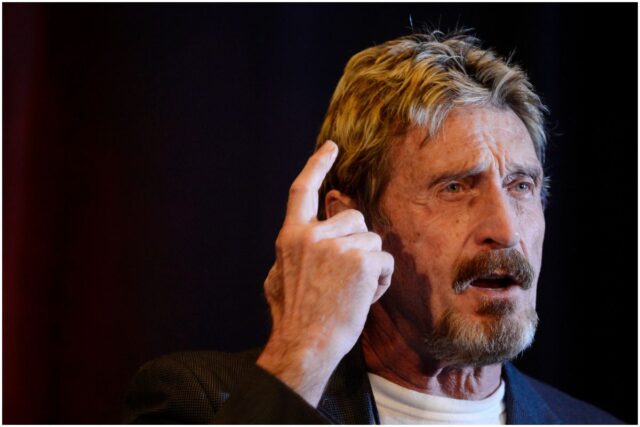 John McAfee was an English-American businessman and computer programmer who is best known as the founder of McAfee Associates.

In 2016, McAfee launched an unsuccessful bid for the Libertarian Party’s presidential nomination during the election.

His parents moved to Roanoke, Virginia, when he was young.

John described his father as ~”an alcoholic and abusive.” His father committed suicide when McAfee was 15 years old.

From 1968 to 1970, he was employed as a programmer by NASA’s Institute for Space Studies in NYC.

In the early 1980s, McAfee worked on a classified voice-recognition program for Lockheed.

McAfee says he wrote the antivirus program ”in a day and a half.” John also said that ”eight months after I started, there was $10m in the bank.”

In the mid-1990s, he sold his shares in the software company and reportedly made $100 million.

In 2001, he published the book ”Into the Heart of Truth: The Spirit of Relational Yoga.” In the book, McAfee provides practices to help the reader develop in-depth self-awareness and also writes about the history of yoga.

In 2009, John started a company that he said would manufacture plants from the Belize jungle into antibiotics.

In 2012, he was considered a “person of interest” when his neighbor Gregory Faull was shot to death. Raphael Martinez, a police spokesperson, told FT: ”He is still just a person of interests the investigation.” Later, McAfee left Belize for Guatemala, where he was arrested on charges of entering the country illegally. John was about to be deported back to Belize when he faked a heart attack.

On December 12, 2012, he was released from detention in Guatemala and deported to the US. Faull’s death still remains unsolved.

In September 2015, McAfee decided to start a new political party called The Cyber Party. In December 2015, he announced that he would instead seek the presidential nomination of the Libertarian Party. He lost to former New Mexico Governor Gary Johnson.

In May 2016, John was appointed as the CEO of the technology holding company, MGT Capital Investments (he left the company in early 2018). Also in 2016, he was the subject of filmmaker Nanette Burstein’s Showtime documentary, ”Gringo.” McAfee described the documentary as fiction.

On August 13, 2018, he took the position of CEO with the cryptocurrency company, Luxcore.

In March 2019, McAfee ordered to pay $25 million over Gregory Faull’s murder. Later that year, he was arrested by the Dominican Republic Armed Forces while docking his yacht in Puerto Plata. He left detention after “four days of confinement.”

In December 2019, he announced his intentions to run for president in the US 2020 elections. John tweeted: ”The McAfee 2020 US Presidential Campaign has now formally begun.”

In July 2020, McAfee tweeted that Intel corporation is suing him due to the use of the name “GhostbyMcAfee.”

On October 6, 2020, he was arrested in Spain over tax evasion charges.

John McAfee married Janice Dyson in 2013. She is more than 30 years younger than him. He reportedly met his wife in Miami on his first day back on US soil.

Janice said in an interview about their first meeting: ”It was, I don’t know how to say it, magical — cause he saw the hurt that was there.”

The couple lives in a gun-filled mansion in Tennessee. His personal bodyguard John Pool is always at their side.

He was previously married to Judy McAfee.

On June 23, 2021, McAfee was found dead in a Barcelona prison, hours after the Spanish National Court ordered his extradition to the US.

”If you read just one book of Jiddu Krishnamurti, you will be a different human being.”

”If the majority holds some thing of value, you can be certain it has none.”

”I’m a mad man to some people because I don’t follow the normal rules.”

”A good example is more irritating than a bad one.”

”One never knows what the future holds.”

”You must believe there’s nothing that happens electronically that I can’t find out about.”

In 2013, he uploaded a video titled – “How To Uninstall McAfee Antivirus.”

McAfee has also been involved in leadership positions in other companies, including Luxcore, MGT Capital Investments, and Everykey. In addition, John founded Future Tense Central and QuorumEx.

His investments suffered in the global crisis of 2007. The New York Times reported that his personal fortune had declined to $4 million in August 2009. However, John later said he had lied about the loss of his fortune.

In 2019, McAfee said that he is charging $105,000 for tweets promoting ICOs. Therefore, at the time of his death, computer programmer John McAfee had an estimated net worth of $10 million.

READ THIS NEXT: Who is Marty Stouffer?