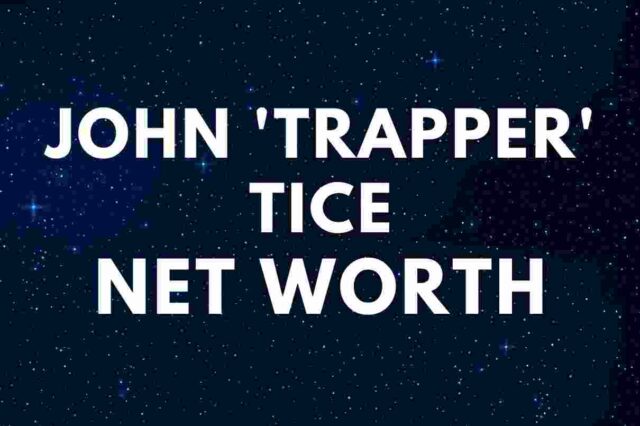 What was John ‘Trapper’ Tice’s net worth at the time of his death?

John ‘Trapper’ Tice was the founder and leader of the Appalachian Investigations of Mysterious Sightings team (AIMS).

John was also a member of Mountain Monsters, a TV series that followed a team of hunters searching for unexplained creatures in the Appalachian Mountains.

His parents were Thelma Beatrice Brammer Tice and C.B. (Dick).

Tice was raised in the mountains of West Virginia. During childhood, John was told local legends by his dad.

From 1967 to 1968, Tice was deployed to Vietnam. John was part of the 3rd Brigade and the 25th Infantry Division. John received the USAF Commendation Medal for Meritorious Service, the Army Commendation for Valor, and the Vietnamese Cross of Gallantry.

”As a combat Vietnam vet, I was fortunate enough to have a homecoming,” John tweeted in 2015. ”To my brothers that didn’t, I salute you.”

During his time in Vietnam, Tice gained tracking and survivalist skills.

From 2013 to 2017, Trapper appeared on Mountain Monsters, a cryptozoology-themed reality TV series that follows a group of trappers and hunters who want to find unidentified creatures in the Appalachian Mountains.

”If you spend as much time in the woods as I do, and if you see things and you hear things that you don’t understand, that makes you want to investigate,” Trapper told Hollywood Soap Box.

Other cast members include:

They had close encounters with giant hogs, Chupacabras, Wolfmen, Bigfoots, and many other creatures.

”Mountain Monsters” is produced by American Chainsaws Inc. for Travel Channel. ”Mountain Monsters” was criticized by Matt Moneymaker (the star of the Animal Planet series ”Finding Bigfoot”) in 2015. ”I actually need to explain this to some people: Mountain Monsters is a scripted fictional show,” Moneymaker tweeted in April. He added: ”Those guys are all actors. It’s all fake.”

There is information about John ‘Trapper’ Tice’s romantic life.

In 2015, he suffered a blood clot in his leg (note – an immobile blood clot generally could move and become dangerous) that required an emergency operation. ”It’s 4 in the morning, and Trapper’s headed to the hospital,” Jacob “Buck” Lowe said at the end of one episode of Mountain Monsters. ”We don’t know if he’s gonna make it.”

”The person on the tv screen pales in comparison to the actual legend of man, father, and grandfather he was,” wrote his son John on Facebook. ”The silence of his absence in our lives is deafening. Love you, Dad.”

Matthew Butler, general manager of Travel Channel, stated for Discovery: ”After the tragic loss of Trapper, we recognized the importance of finding a way to celebrate his life with our AIMS-obsessed fans and then continue his mission.”

”Goatman could be interesting – more paranormal than cryptid from accounts I’ve read. A shapeshifter that may live in the US south?”

”The gang and me will keep getting in trouble – hope they keep pointing cameras at us.”

”The Bigfoot population in the USA is close to 1.5 million strong!”

According to reports, Tice earned around $20k per episode of Mountain Monsters. He appeared in eight episodes.

READ THIS NEXT: Who is Dusty Crum?