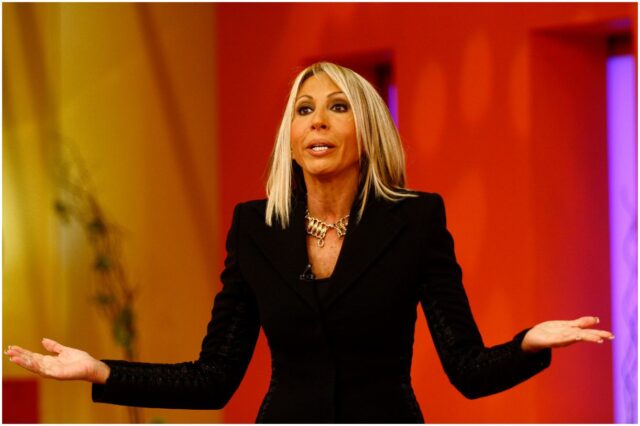 What is Laura Bozzo’s net worth?

Laura Bozzo is a Peruvian talk show host who is well known for hosting the TV show, called Laura en América. During her show, she touches on various social problems like drug addiction, alcoholism, adultery, and domestic violence.

He was born on August 19, 1951, in Haarlem, The Netherlands, to a Guyanese-born Peruvian mother and a Peruvian father (Miguel Bozzo Chirichignio). Her father is of Quechua, Aymara, Spanish, and German descent.

Her mother (Victoria Luisa Rotondo Costa) had a Chinese, Indian, and Black Guyanese mother and an Azorean Portuguese father. She was born in Georgetown, British Guyana.

Bozzo became the ”regidora” of metropolitan Lima in 1992.

In 1998, she began hosting ”Laura en América,” a Peruvian talk-show. The show was recently imported for Spanish-speaking people in the US for broadcast on the Telemundo network.

The theme of the show involves the following topics:

Starting in 1999, the show was also broadcast in Paraguay, Colombia, Bolivia, Chile, and Ecuador.

In the late 1990s, it was the most-watched program in Peru. Additionally, Laura en América was one of the most tuned-in talk shows in other Latin American countries. In February 2001, the show became one of the top-rated shows among adults in its slot in key US markets

In 2008, a scandal occurred when it was discovered that some of the shows provided during ”Laura en América” were actually staged.

In 2002, she was prosecuted for receiving the money to support Alberto Fujimori’s presidential reelection bid of 2000. She received 3 years of house arrest.

Alberto Fujimori is a Peruvian former politician who served as the President of Peru. His presidency ended in 2000 when Fujimori fled the country in the midst of a scandal involving human rights violations and corruption.

On December 24, 2017, President Kuczynski pardoned Fujimori on health grounds. But, Fujimori returned to prison, following a medical board review in 2019.

In 2005, the judiciary was required to set Bozzo free since it had not presented charges against her on time. In July 2006, the court sentenced her to 4 years of conditional prison, however, Bozzo did not have to go to jail since she had been under house arrest for 3 years.

In 2001, after the Alberto Fujimori controversy, her talk show stopped broadcasting.

In 2007, Laura returned for a short time at ATV (a Peruvian television network that was founded in 1959), with a similar format as ”Laura en América,” and it was named – ”Laura en acción.” This show was also canceled in April 2008 due to a few complaints.

On January 24, 2011, Laura signed a five-year contract with Televisa to make a new show, titled – ”Laura.” The show was also canceled in April 2011 due to low ratings. But, on October 10, 2011, Telefutura aired her show again and has become very popular ever since.

READ MORE: Who is SnewJ’s girlfriend?

In 2017, during a hysterectomy (the surgical removal of the uterus), a surgeon accidentally sliced her intestine, and Bozzo was “dead for 20 minutes.”

“I was undergoing a hysterectomy to reduce the risk of cancer and a surgeon cut my intestine.”

”I was in septic shock and dead for 20 minutes. I had a hole in my belly for eight months.”

After her divorce, Laura Bozzo began dating Cristian Zuarez, a singer who competed on the 2nd season of the Univision series Mira Quien Baila.

In 2017, after her operation, Bozzo discovered that Zuarez was cheating on her while she was still in recovery from the hysterectomy.

“I found out through the media.”

Bozzo went on to say:

”I was in bed with him and a Peruvian journalist called and said ‘Laura, they have photos of Zuarez with an Argentine woman and a statement from his brother.’”

“I never needed a man to get to where I am.”

”My show comes out in August, I have a digital platform and a book that I’m finishing.”

Zuarez said that it was his brother that started this whole mess. He explained:

“I’m hurting by everything that is being said. It doesn’t make sense that they talk about an image that doesn’t say anything.”

”My mom took that photo and they were stolen from her cell phone. I am going to send my brother to jail for what he did.”

In 1987, Laura became the appointed officer of the Instituto Nacional de Cultura. She also founded ”Solidaridad de Familia,” a charity organization that helps people with medical and legal problems.

In 2009, TV Azteca hosted Laura’s program Laura de todos, however, about 12 months later she changed to the company Televisa.

While filming the 100th-anniversary episode of ”Laura en América,” many people rushed into the Dibos Coliseum in Lima.

She currently resides in Callao.

Bozzo earned most of her wealth from being the host of the show – ”Laura en América.” In addition, she published a book (her autobiography), titled – ”Más allá del infierno,” which can be purchased on Amazon.

She also has more than 665,000 followers on her Instagram account which can be monetized with paid posts.

READ THIS NEXT: Who is Michael Weist?