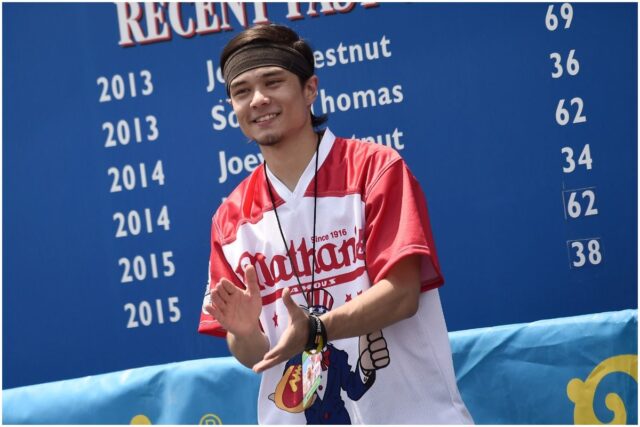 It might seem like a contradiction, but competitive eater and student of nutrition Matt “Megatoad” Stonie is making the juxtaposition work.

Between learning about healthy eating, devouring a Happy Meal in 15 seconds, and harnessing the power of social media with his following of 15 million YouTube subscribers, where did Matt Stonie even come from?

Matthew “Megatoad” Kai Stonie was born in San Jose, California, on May 24, 1992. The savvy social media star comes from a multi-cultural background, with Lithuanian, Czechoslovakian, and Japanese bloodlines.

He has a younger brother named Morgan, who often helps with video production on the ultra-successful Matt Stonie YouTube channel.

The California native attended Evergreen Valley High School in his hometown. He went on to enrol at Mission College in Santa Clara—not venturing far from his roots—where he studied nutrition.

Despite his career as a competitive eater, Stonie’s goal is to become a dietitian.

A Recipe For Success

Stonie fell into the local competitive eating scene back in 2010, following in the footsteps of the famous Joey Chestnut—another San Jose local.

He was 17, entering a local lobster roll contest at the beach with the sole dream of winning the $1,000 prize money.

More than just the cash, an eating competition opened the teen’s eyes up to a whole new career prospect.

That win, in 2015, solidified what those on the competitive eating scene all knew—Stonie was a force (or a stomach) to be reckoned with.

Stonie’s fans recognize him for his speed from the starting bell, where he often pushes ahead of the competition to give himself a comfortable lead buffer.

The Megatoad views competitive eating much like any athlete sees their sport—he trains and fine-tunes his skills in much the same way.

A Big Bite Of The Records

Matt “Megatoad” Stonie has amassed some jaw-dropping wins in the competitive eating arena since he burst onto the scene in 2011. Here is just a taste of them…

An Appetite For More

In 2020, major talent management firm Night Media signed Stonie as their exclusive rep. The firm, which also represents social media giants like MrBeast, Preston, and ZHC, has had its eye on Matt for a while, as part of their expansion into representing content creators.

While this kind of partnership is huge for influencers, Stonie has experience acting as a brand ambassador for Dollar Shave Club, Honey, Tide, and telco giant AT&T.

With 13 million subscribers and a whopping 2.5 billion views, Stonie averages a million video views and more than 6,000 new subscribers every day.

Stonie is also an excellent proponent for building fan engagement, giving his followers the opportunity to suggest food challenges for his YouTube channel.

There is no information about Matt Stonie’s girlfriend.

Stonie earns most of his wealth from prize money in competitive eating competitions, ads on YouTube, and sponsors.

On YouTube, Matt has over 3 billion views, meaning about $9 million in revenue before taxes.

Therefore, competitive eater Matt Stonie has an estimated net worth of $7 million.

Want to see what a competitive eater can really do? Check out Matt Stonie’s most viewed video here.

READ THIS NEXT: Who is Carter Sharer?