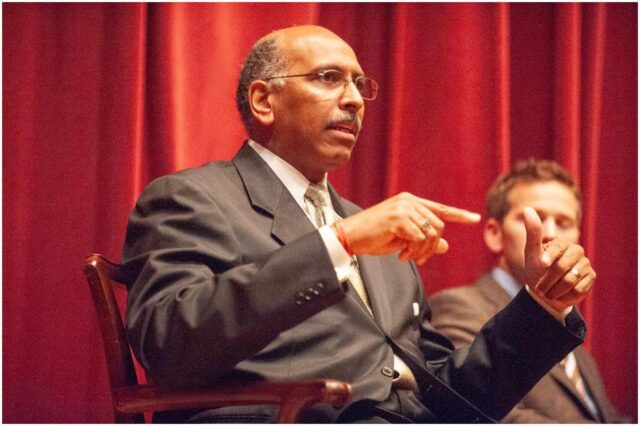 Michael Steele is the first African-American chairman of the Republican National Committee who served from 2009 to 2011.

Mr. Steele has also been an eloquent and entertaining guest on cable political talk shows like – The Colbert Report, Comedy Central’s Daily Show, and HBO’s Real Time with Bill Maher.

His writings on politics, business, and law have appeared in Catholic University Law Review, The Journal of International Security Affairs, Townhall.com, Politico.com, The Washington Times, The Wall Street Journal, BET.com, The Root.com, and The Grio.com.

He was born on October 19, 1958, at Andrews Air Force Base in Prince Georges County, Maryland, USA. Michael was adopted as an infant.

Steele spent his childhood in the Petworth neighborhood of Washington, D.C., with his sister Monica.

He attended Johns Hopkins University (a private research university in Baltimore, Maryland), where he received a B.A. in international relations.

After graduating from Johns Hopkins University, Michael worked for about 12 months as a high school teacher at Malvern Preparatory School in Pennsylvania, teaching classes in economics and world history.

Steele was also on track to become a Catholic priest, however, he dropped out before he could be ordained.

From 1991-1997, he was a corporate securities attorney at the international law firm of Cleary, Gottlieb, Steen & Hamilton in Washington, D.C., specializing in financial transactions on behalf of Wall Street underwriters.

In 1995, Michael was chosen as the Maryland State Republican Man of the Year.

In 2003, Steele became the state’s 7th Lieutenant Governor of Maryland. He was the first African American elected to statewide office in Maryland.

In April 2005, President Bush chose Steele to be a member of the U.S. delegation at the investiture of Pope Benedict XVI in Vatican City.

In the same year, he was awarded the Bethune-DuBois Institute Award for his efforts to improve the quality of education in Maryland. Furthermore, he was named an Aspen Institute Rodel Fellow in Public Leadership.

READ MORE: Who is Jerry LaVigne?

On February 1, 2007, Michael was named the chairman of GOPAC, a political action committee that is working to elect Republicans to office.

Later that year, he joined Dewey & LeBoeuf, an international law firm, as a partner in the firm’s Washington, D.C. office.

In the same year, he spoke of illegal immigration and called for the United States to “secure our borders first.” He also said:

“You cannot begin to address the concerns of the people who are already here unless and until you have made certain that no more are coming in behind them.”

Starting in 2011, Michael has contributed as a political analyst for MSNBC and as a regular columnist for the online magazine – ”The Root.”

In 2018, he was named a faculty fellow at Brown University’s Watson Institute for International and Public Affairs, where he leads seminars.

During an interview, Michael declared:

“This is the ideal time for me to take the reigns at US Vote and work with the organization to reach out to more voters, getting them involved in the voting process.”

In 2019, The Republican National Committee has picked Michael Steele to be the new face of the party as the GOP forges a revival following a 2nd straight electoral drubbing.

“It’s time for something completely different, and we’re gonna bring it to them.”

Michael Steele got married to Andrea Derritt in 1985.

On January 4, 2010, he published – ”Right Now: A 12-Step Program for Defeating the Obama Agenda,” a book that is a call to arms for grassroots America.

Moreover, he is the co-author of ”The Recovering Politician’s Twelve Step Program to Survive Crisis.”

”It has been a source of frustration to me that if you look at the demographics for those that break down demographics every election. African Americans, 90 percent, most elections, tend to vote for the Democratic Party.”

“I saw something that made sense to me, and I watched and learned and listened and understood that the Republican Party is the political home for the African American community.”

“America, here’s your tell. Whenever the president says, ‘I heard,’ shut it down, stop it, call it a lie and move on, because the next sentence, word, phrase out of his mouth will be a lie.”

”That’s what Republicans want to talk about, the poor and those who are struggling to make it, we want to help them do that.”

He credits Ronald Reagan and his mother, Maebell, with turning him toward the Republican Party.

In 2007, Steele coined the phrase “Drill Baby Drill” during the Republican National Convention in Minnesota.

Steele earned most of his wealth from working in two law firms – ”Cleary, Gottlieb, Steen & Hamilton” and ”Dewey & LeBoeuf.” He also worked as a high school teacher as well as at Brown University’s Watson Institute.

Additionally, Michael was Lieutenant Governor of Maryland and is a co-founder of a cannabis-focused fund and consulting firm.

Therefore, American attorney Michael Steele has an estimated net worth of $3.5 million.

READ THIS NEXT: Who is Colin Moriarty?