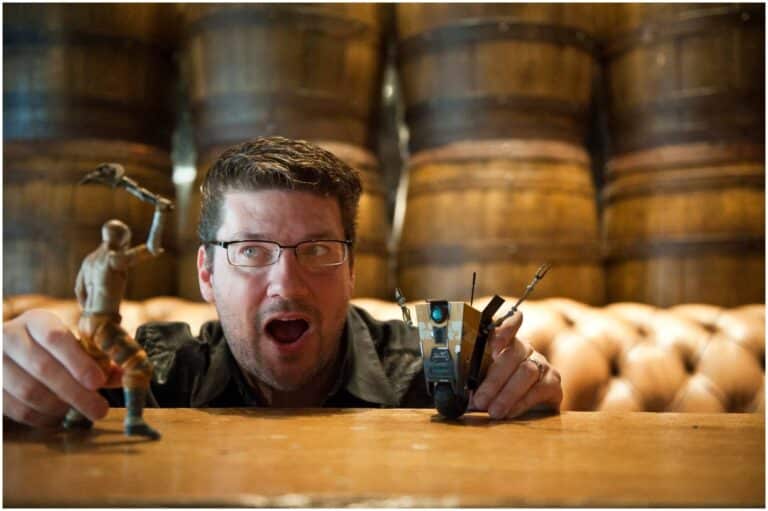 Randy Pitchford is an American video game developer and co-founder of Gearbox Software, a company that developed Brothers in Arms, Borderland, and Battleborn videogames.

At age 12, Pitchford created his first video game on a CPM machine.

Randy went to the University of California, LA, to get a law degree.

During college, he worked as a professional magician to help pay for school.

In May 1997, he left the company for the now-defunct video game company Rebel Boat Rocker.

During an interview, Randy said:

”We created Gearbox in Jan. 1999, with just a few guys and I that worked together before.”

Pitchford went on to say:

”I had made games before and had worked with a company called 3D Realms.”

In 2000, he received the Academy of Interactive Arts and Sciences award for best PC Action Game for his production of Half-Life: Opposing Force – an expansion pack for the SF first-person shooter video game ”Half-Life.”

In 2005, his company launched its first independent set of games, called – ”Brothers in Arms,” on mobile devices and console.

In 2008, the game was ported to the Wii. Brothers in Arms: Road to Hill 30 takes place during WWII and focuses on tactics.

Gearbox Software is best known for creating the Borderlands series.

Pitchford said that the idea of Borderlands was inspired both by being drawn into first-person shooters as well as being an avid role-playing game fan.

Borderlands (the first game in the series) was launched in 2009. The story focuses on a group of 4 “Vault Hunters,” who travel to a planet named Pandora to hunt down an alien vault.

Borderlands 2’s story centers around the Vault Hunters on their quest to liberate Pandora from the tyrannical Handsome Jack and to find a new alien vault.

It had sold more than 13 million copies.

The plot in Borderlands 3 is centered around stopping the cult-leading twins, Tyreen and Troy Calypso, from harnessing the power of the alien Vaults. The levels of the game take place on multiple planets.

It shipped over 5 million copies in five days from its release.

On May 3, 2016, Gearbox released an online first-person shooter video game, titled – ”Battleborn.” It was published by 2K Games for Xbox One, PlayStation 4, and Microsoft Windows.

At launch, Battleborn offered players the chance to utilize 25 different heroes. Some of these heroes are:

In an attempt to rekindle interest in the game, Gearbox launched a free trial that made the video game free-to-play in June 2017.

Later, it was announced that the game’s servers will shut down by January 2021.

It is a real-time strategy video game that was developed by Relic Entertainment in 1999.

In 2013, Gearbox Software purchased the rights to the series.

The couple has a son, named Randall Steward Pitchford III (born on January 8, 2000).

”I tend to favor curiosity and disfavor setting up a feeling and empathetic creature for discomfort.”

”As the day progresses, I am discovering who my friends are.”

”If you’re reaching millions, there will be tens of thousands of people who absolutely hate us.”

His father worked within the US intelligence system.

In 2019, a lawsuit accusing Pitchford of engaging in lewd behavior and withholding a $12 million bonus from employees has been dismissed by a Dallas County court. The dismissal statement said:

“All misunderstandings between the parties have been corrected, and apologies were exchanged.”

Pitchford tweeted about the lawsuit:

”The attacks made by my former friend and colleague have no basis in reality or law. He is simply trying to shake me down for money.”

”We will win, but because lawsuits are pending I can’t comment as much as I’d like. I am shocked by his lies.”

Pitchford earns most of his wealth from being the President and CEO of Gearbox Software, a gaming company that he co-founded in 1999.

Borderlands franchise alone has generated over $1 billion in revenue. Therefore, Randy Pitchford has an estimated net worth of $16 million.