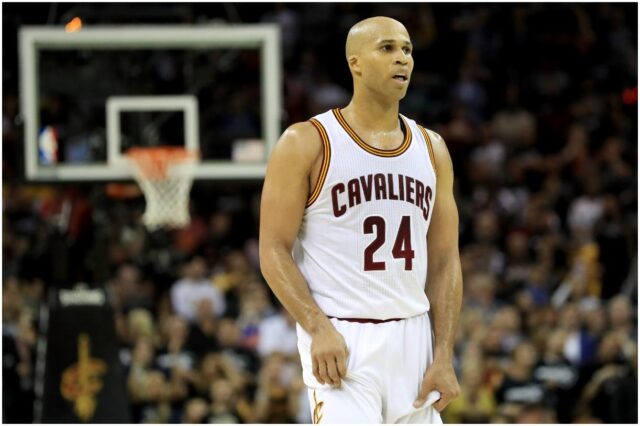 Richard Jefferson is an analyst on ESPN and a former American professional basketball player.

His parents were both Christian missionaries.

Jefferson went to Moon Valley High School in Phoenix, AZ. Later, he played college basketball at the University of Arizona.

Richard broke into the NBA in 2001-02 for the New Jersey Nets (now known as the Brooklyn Nets). He was named to the NBA All-Rookie Second Team in his first season with the Nets.

In 2004, he was a member of the USA Men’s Olympic basketball team in the Summer Olympics.

In 2008, he was traded to the Milwaukee Bucks for Bobby Simmons and Yi Jianlian.

On June 23, 2009, Jefferson was traded to the San Antonio Spurs for Fabricio Oberto, Kurt Thomas, and Bruce Bowen.

In 2010, Richard re-signed with the San Antonio Spurs.

On March 15, 2012, Jefferson was traded for Stephen Jackson to the Golden State Warriors.

In 2016, Jefferson won an NBA championship with the Cleveland Cavaliers. Richard declared for ESPN:

”When I got to the NBA Finals again in 2016, and I’m the 10th-best player on our team, I understood that my role was serious.” Jefferson continued: ”My responsibilities were real. I knew I could have a serious impact because I’d seen it before.”

Jefferson announced his retirement from professional basketball on October 13, 2018.

”I’d like to formally announce after a ton of speculation I’m coming out of retirement. I’d like to play basketball for one more year.”

He last played for the Denver Nuggets in the 2017-18 season.

In 2017, he began co-hosting the podcast Road Trippin’ alongside Channing Frye and Allie Clifton.

The two have a son.

Called Off A Wedding

Jefferson was previously engaged to Kesha Nichols, the CEO of the dance production company ”Sugar and Spice Productions.”

Richard actually canceled the wedding with Kesha just two hours before the ceremony was scheduled. Friends and guests had already shown up. One friend said:

”He [Jefferson] never showed up at the hotel, but ‘all his boys were there.”

According to reports, the wedding had a $2 million price tag.

Jefferson said in a later interview:

Kesha said in an interview that if the wedding was canceled, she and Richard no longer could speak. Nichols also said:

”I have no hard feelings. I will always care about him. … My heart is broken. I’ll miss him as a friend.”

”That was probably the biggest win in the history of the franchise.”

”Our offense failed us. A lot of the decision-making.”

Jefferson earned most of his wealth from playing for eight teams across 17 seasons in the NBA.

He played in 1,181 career games and won a championship with the Cavaliers in 2016.

Richard earned over $115 million from his contracts with the NBA teams he has played for.

Additionally, Jefferson serves as a basketball analyst for ESPN as well as for the YES Network.

In July 2022, he made his officiating debut at Summer League.

READ THIS NEXT: Who is Israel Folau?