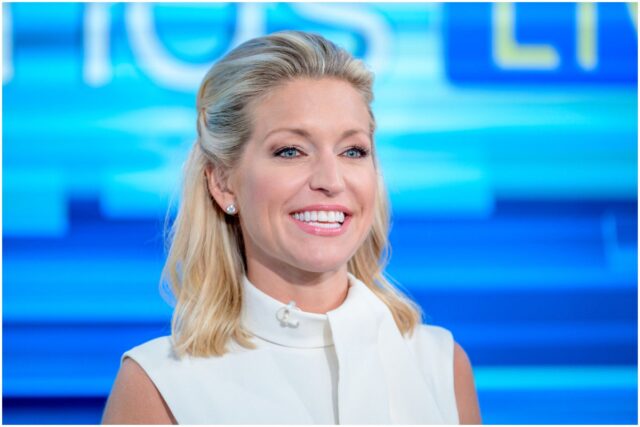 What are Ainsley Earhardt’s net worth and salary?

Ainsley Earhardt is an American journalist and author who serves as the co-host of Fox & Friends.

She was born on September 20, 1976, in Spartanburg, South Carolina, USA, as Ainsley Hayden Earhardt.

In 1995, she graduated from Spring Valley High School in Columbia, South Carolina.

In 1999, Earhardt earned a bachelor’s degree in Journalism from the University of South Carolina.

After college, she was hired as a reporter for WLTX, the local CBS station in Columbia. There, Ainsley was named Best Personality of the Year in Columbia Metropolitan Magazine.

In 2007, she moved to NYC and began working at the FOX News Channel.

On November 15, 2016, Earhardt released her first book, titled – ”Take Heart, My Child: A Mother’s Dream.” In the book, Ainsley writes about the notes her father wrote her before school each morning as well as other details about her childhood.

”It’s my story about faith and how God changed my life, continually showing me everything will always be okay,” Earhardt said about the book.

She provided live coverage of the royal wedding of Prince Harry and Meghan Markle in May 2018.

The two first met while attending the University of South Carolina. They divorced in 2009.

On October 13, 2012, Ainsley Earhardt married Will Proctor, a former starting quarterback for the Clemson Tigers at Clemson University.

Ainsley and Proctor first met on a blind date.

Will filed for divorce in October 2018. He said at the time: ”I am devastated about this situation and did not envision this for the future of our family.”

According to People, there were claims that Proctor ”was unfaithful with one of her closest friends a few years ago, and there is evidence to prove it.” But, Will denied the claims: ”There is not one ounce of truth to the allegation that I had an affair.”

”After much prayer and careful consideration, Will and I have separated,” Ainsley said in a statement. She added: ”I am fully committed to parenting and doing what is always best for my darling, little girl.”

Their divorce was finalized in 2019.

In June 2020, it was reported that Earhardt and talk show host Sean Hannity were dating.

”I do not discuss my personal life in public,” Hannity said in a statement.

”Right now, I am focused on raising my daughter, and I am not dating anyone,” Ainsley said in a statement issued through a Fox network spokesperson. Earhardt continued: ”As anyone at Fox News will tell you, Sean is a wonderful person, and whomever he chooses to date will be extremely fortunate.”

Earhardt and Will Proctor welcomed a daughter named Hayden in November 2015.

”We are absolutely thrilled to welcome our new baby girl, Hayden, into this world,” Ainsley tweeted in November 2015. She also wrote: ”My husband and I are overjoyed.”

”Just because I don’t agree doesn’t mean I don’t care about you and I can’t see your side.” (Elle)

”Jesus teaches us so many lessons in the Bible about loving others.”

”Summer is ending, but the fall and cooler weather will bring its own joy and laughter.”

”It’s so fun to watch a child who happens to be yours discover life.”

”There are times when you do things that you’re not happy about, and it’s just trying to make yourself better the next day.” (FoxNews)

”Our trust in God will get us through these times.”

”I’m a night owl, and I love alone time when the house is finally quiet.”

She completed a half marathon in Austin, Texas.

Many people are wondering how much money does Ainsley Earhardt make? Here are the details:

Earhardt earned most of her wealth from serving as the co-host of the daily morning news/talk program Fox & Friends. She is also a co-host of FOX & Friends’ After the Show Show as well as on-demand subscription-based streaming service FOX Nation. Ainsley Earhardt’s annual salary at Fox News is about $2 million.

In addition to her work at Fox News, Ainsley makes money from selling copies of her books (The Light Within Me, Through Your Eyes, and Take Heart, My Child).

Therefore, American journalist Ainsley Earhardt has an estimated net worth of $7 million.

READ THIS NEXT: Who is Charles Stanley?