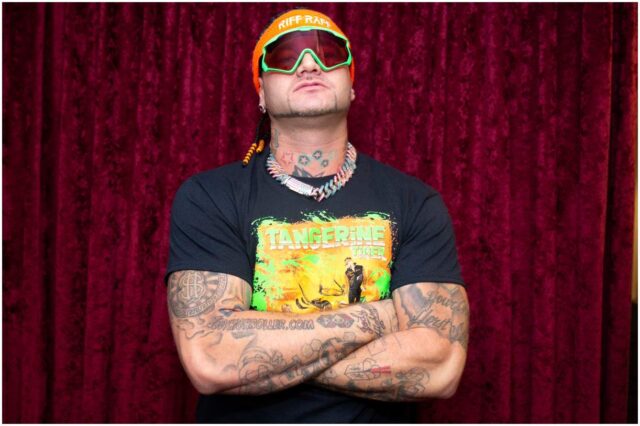 Riff Raff (birth name – Horst Christian Simco) is an American rapper and actor, who has been a member of the group Three Loco.

His father, Ronald, worked as a manager at Walmart and a police officer. He was also a Vietnam War veteran. His mother, Anita, was a maid.

Horst and his family lived in Copperfield, a suburb northwest of Houston. He said about his childhood:

”I grew up there, but I grew up in multiple cities too. I know a lot of people say, ‘Oh, are you from  Houston?’”

”I can’t say I’ll represent the average Houston person or something like that.”

While growing up, Christian played a lot of basketball. During high school, he was the shooting guard for the high school’s basketball team.

In 2001, Riff enrolled at Hibbing Community College in Hibbing, Minnesota.

By the end of college, he has grown immense interest in rapping.

From 2011, he began to be managed by OG Ron C (an American management company executive, DJ, radio personality, and record producer) of Swishahouse fame. Horst also moved to LA.

In 2012, Christian released music videos for the Chief Keef collaboration “Cuz My Gear” as well as for the songs – Time and Larry Bird.

Later that year, Horst collaborated with Usher on the album Jody Highroller.

In June 2012, he released a mixtape titled – the Summer of Surf. In addition, the rapper released the album called – ”The Golden Alien.” The album featured tracks that were produced by Obtuse Angle, Freeze Dried, and MikeChekMusic.

In 2013,  Christian was arrested after the police officers found weed along with drug paraphernalia in his car. He was released in less than 24 hours.

The album had features from:

In 2018, a woman filed a civil suit against Horst and DollaBillGates.

It was about an incident that took place in the early morning of August 31, 2014.

In a court declaration from September 14, 2016, Christian denied the allegations. He said:

“I did not sexually assault [Jane Doe], nor did I have any sexual contact with her whatsoever.”

In the same year, he was accused of drugging and raping a 19-year-old woman. The incident supposedly happened after a 2013 show.

After the accusations, the booking agency Audiopaxx canceled Horst’s New Zealand and Australia tour, declaring that the company:

“takes these matters seriously and does not condone any of this alleged behavior.”

The album featured guest appearances from:

In 2019, Riff released an album titled ”Cranberry Vampire.” It was followed by ”Vanilla Gorilla” in 2020.

Riff Raff has been in relationships with:

In 2019, it was reported that Riff Raff has dated a 17-year-old girl (Alyssa Regalbuto). Later, the rapper denied he dated Regalbuto.

His lawyer stated that Riff Raff “categorically denies these baseless allegations of a sexual relationship with a 17-year-old.”

”When the world was born, everybody was naked.”

”I can’t talk about other people, I’m not allowed to.”

”Why would I talk about the past when I got a bright future?”

He said about his musical influences:

In the 2013 film Spring Breakers, James Franco’s character was based on Horst’s persona.

He has many tattoos, including the logos for the NBA and MTV.

Horst earned most of his wealth from his music.

Some of his albums are – Vanilla Gorilla, Cranberry Vampire, Pink Python, Peach Panther, and Neon Icon.

Raff also earned some money from acting. For example, he appeared in One Life to Live and Major Lazer. In November 2017, Horst appeared on the reality show, named – ”The Challenge.”

Moreover, he has a YouTube channel with more than 246 million views (meaning $700k in revenue). He also sells merch on different websites.

Therefore, rapper Riff Raff has an estimated net worth of $7 million.

READ THIS NEXT: Who is Lil Durk?