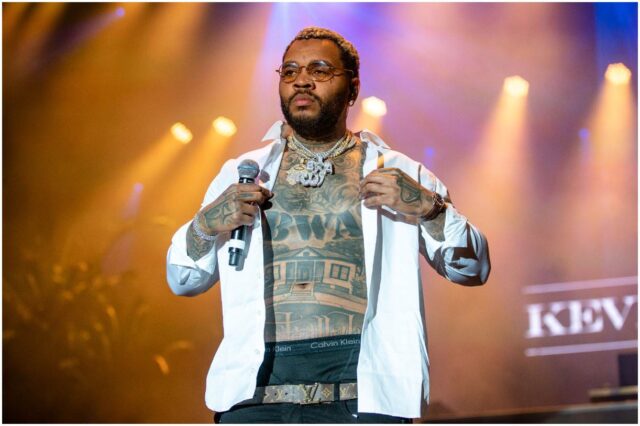 Kevin Gates (born as Kevin Jerome Gilyard) is an American rapper who signed to Atlantic Records in 2013. In the same year, he broke onto the rap scene with the mixtape titled – ”The Luca Brasi Story.”

At age 13, Gates went to prison for driving dangerously on the street.

In 2003, Kevin was arrested again for fighting and stabbing his opponent in front of a film theater.

In the same year, Gates was featured on Pusha T’s single Trust You.

“It imbues trap’s claustrophobic bleakness with an emotional nakedness, capable lyricism, and melodic certitude many of its recent breakout stars have lacked.”

In May 2014, Kevin was named a member of XXL’s Freshman Class.

In the same year, Gates released the mixtape named – ”By Any Means.” The mixtape sold a total of 17,000 copies in the United States. It included the hit singles ”Amnesia,” ”Posed to be in Love,’’ and ”Don’t Know.” The mixtape debuted at number 17 on the Billboard 200. ”By Any Means” was distributed by Atlantic Records and released by his Bread Winners’ Association Label.

In May 2015, Kevin released a mixtape, called – ”Murder for Hire.” The mixtape was the 3rd installment in the Luca Brasi series. Later that year, Gates released the song “Kno One.” It became the 1st single from his debut studio album, titled – ”Islah” which was released in January 2016.

The album stood at number 16 at the Canadian Albums Chart. ”Islah” sold more than 93,000 copies in the United States within the first week. It debuted at number 2 on the Billboard 200.

Other singles on the album are:

In the follow-up year, the artist announced that the sequel to Murder for Hire would be released on May 27, 2016.

In 2016, he was arrested and sentenced to 180 days in jail since Kevin was caught on camera kicking a 19-year-old female to the ground during an August 2015 concert.

Kevin was mad because the woman kept grabbing his shorts while performing.

On the stand, Kevin admitted to kicking her, but only as a form of self-defense.

“I kicked them, I wanted them off me.”

In 2017, he was re-arrested amidst his release after an active warrant on charges of outstanding weapons.

In the same year, Kevin was sentenced to a 30-month prison term for gun charges stemming from a 2013 incident.

The rapper admitted to pleading guilty due to the leniency he noticed with his case from the Florida legal system, resulting in a lesser overall charge.

During an interview, Gates said:

“I was innocent, but I pled guilty to that charge because, you know, a lot of times you can beat the charge, but you can’t beat the ride.”

In May 2018, Kevin released the three-song EP titled – ”Chained to the City.”

They have two children, named Islah and Khaza.

On February 2, 2012, he created his YouTube channel, which has more the 6.41 million subscribers and over 5.5 billion views.

”I don’t let the left hand know what the right hand is doing.”

”Often times the things that most make sense – make no sense to the heart but stay Focus.”

”I adapt and I adjust to whatever environment I’m in.”

”Dwelling on “what it’s not” brings so much emotional discomfort, but, Remembrance of the “Good Times” is enough to last a lifetime, well at least for me it is.”

”Be positive even if you feel there’s nothing to be positive about for today is the day u. May receive your greatest Blessing.”

”I’m a very analytical person. I observe a lot of the things that people don’t notice.”

”My Grandmother taught me that if ur doing something you’re ashamed of – you need not do it.”

”I never want to be the person to wonder what it could have been if only I would’ve tried – at least I was willing to try.”

Kevin has worked with artists such as:

Gates earned most of his wealth from his music. Some of the rapper’s popular singles, mixtapes, and albums are – By Any Means, Stranger than Fiction, and Islah.

In addition, he has a YouTube channel with over 5.5 billion views (about $11 million in revenue, before taxes). Also, he sells merch on his website – store.kvngates.com. Therefore, rapper Kevin Gates has an estimated net worth of $5 million.

READ THIS NEXT: G Herbo Net Worth