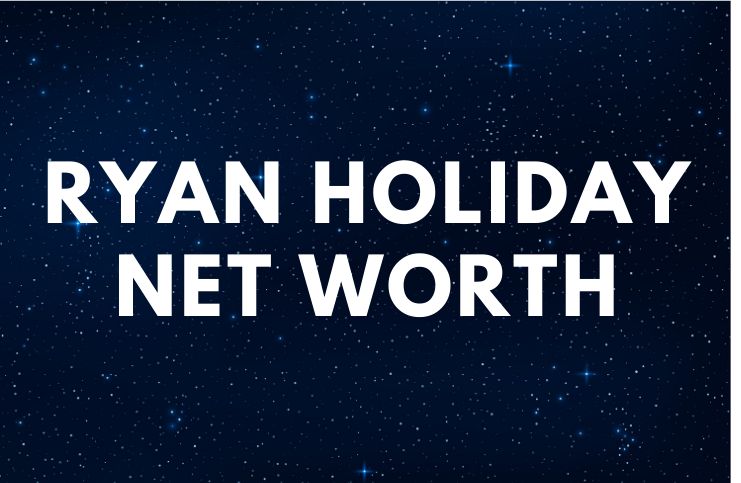 Ryan Holiday is an American media strategist and the author of many bestselling books including The Daily Stoic, Ego Is the Enemy, and The Obstacle Is the Way. Holiday was described as “leading the charge for stoicism.”

He is the current founder and partner at Brass Check Marketing where he focuses on marketing, advising, and consulting.

Ryan briefly studied at the University of California, Riverside. He left college to work as a media and marketing strategist for American author Robert Greene.

He wrote on his bio:

”When I was 19 years old, I dropped out of college to apprentice under Robert Greene, author of The 48 Laws of Power.”

”My mentor Robert Greene was on the board of directors. I was his research assistant and sort of marketing person.”

After apprenticing under Greene for about two years, Ryan started to work as the Director of Marketing at American Apparel, an online-only retailer based in LA. American Apparel is currently owned by Gildan Activewear. There, he had become internationally renowned for his work in advertising. He has also written on the topic of media manipulation.

In 2012, he founded Brass Check Marketing, a strategic marketing and advising firm.

Currently, Ryan is a media strategist for brands like Google and Complex Media as well as for people like Dov Charney, Tim Ferriss, and Tucker Max.

His first book, Trust Me I’m Lying, was published in 2012. It is taught in colleges around the world. The book debuted on the Wall Street Journal bestseller list.

In his book, Ego is the Enemy, Ryan explains that the ego is a powerful internal opponent.

He wrote in the book:

”Stillness is that quiet moment when inspiration hits you. It’s that ability to step back and reflect. It’s what makes room for gratitude and happiness.”

”Stillness is one of these things that I think manifests itself in different ways.”

The two first met at a college party when they were sophomores.

”The hard thing about hard things is that people often make them worse by seeing the disaster and not the opportunity presented.”

”When success arrives, ego begins to toy with our minds and weaken what made us win in the first place.”

”All great men and women went through difficulties to get to where they are, all of them made mistakes.”

”We often learn the hard way that our world is ruled by external factors.”

”The real reason to write a book is because there is something you have to explore that you think readers want to learn about.”

When asked about failure, he said in an interview:

”Almost all the failures I’ve had in my life that have been very, very hard were inevitably made harder by what I projected onto the other person.”

Holiday earned most of his wealth from working at American Apparel, managing his creative firm, Brass Check, and selling his books. So far, his books have been read by more than two million people worldwide and translated into 30 languages. Therefore, Ryan Holiday has an estimated net worth of $7 million.

READ THIS NEXT: Is Naval Ravikant married?