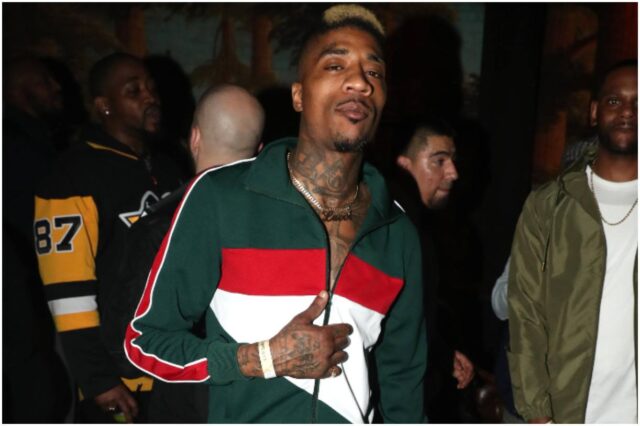 Solo Lucci (real name – Michael McIntosh) is an American rapper who is best known for the release of his single “Whip It.” The song was frequently used in Vine videos and memes by popular web stars, and it has earned more than five million listens on the music-sharing site SoundCloud.

In 2012, Solo released his first single called “RIP Tupac.” In this song, he pays tribute to the deceased Tupac Shakur by using a combination of smooth lyrics and strong bass.

In 2014, Lucci was joined by Akon for the track “Killaz & Drug Dillaz,” which landed on his mixtape – ”Life After Death.”

Akon is a Senegalese-American vocalist who is best known for his R&B-style vocals, which are featured in his collaborations with hip-hop artists as well as on his own hit songs. His 2005 single called “Lonely” reached the top 5 on the Billboard Hot 100. Also, his 2nd album, titled – ”Konvicted,” yielded the hit single “Smack That.” Akon learned to play the djembe, guitar, and drums before he was 7 and moved to New Jersey.

In 2015, Solo found success with his single “Whip It,” which gained him about 5 million listens on SoundCloud.

Solo posted his first tweet in January 2014 reading “New Beginnings.” He has more than 9,000 followers on Twitter.

Lucci had a girlfriend named – Sara Scott. The couple dated for almost four and a half years.

He was also in a relationship with Alexis Sky.

He has a baby boy, Sir Honor, with Sara Scott.

There has been speculation surrounding the birth of Alexis Skyy’s daughter Alaiya Grace and the identity of the child’s father.

While Alexis claims that Fetty Wap (an American rapper, singer, and songwriter who rose to prominence after his single, entitled – “Trap Queen”) is Grace’s dad, there have been those who claim that Solo is actually the one who fathered Alexis’ child.

Alexis Skyy is an American reality television personality who has an amazing Instagram following of more than 3 million fans.

In 2018, Solo teased the possibility that he might be Skyy’s father on Vlad TV:

“I’m not saying it’s my baby because I don’t know… I don’t think she knows, but that ain’t my place to say.”

During a December episode of Love & Hip Hop, Alexis declared:

“[The reason] Fetty is hesitant to claim Alaiya is because people like Solo Lucci is running around trying to get clout off my name, claiming Alaiya, knowing damn well he’s not her father.”

On January 4, 2019, Alexis shared a now-deleted Instagram post showing the results of a negative paternity test. She also wrote:

“The DNA reports states this: the alleged father is excluded as the biological father of the tested child,” she said. “Lucci is not her father like the fuck I said.”

After breaking the news to Solo, Skyy demanded that he apologize. Solo said:

“I apologize. I’m glad that we can get this closure. Like I just feel like the shit got way out of hand.”

Solo is friends with Dennis Schroder, an Atlanta Hawks point guard who made his debut in The National Basketball Association in 2013 for the Atlanta Hawks.

His single “Cash Money” was based on his admiration of Lil Wayne, a Grammy Award-winning rapper who is best known for his hit albums, singles, and mixtapes, including “Lollipop” and “A Milli.”

Lil Wayne is the CEO of his own label, entitled – ”Young Money Entertainment,” which was founded in 2005. Lil Wayne won 4 Grammy Awards, including the award for Best Rap Song for his successful song “Lollipop.”

During a 2017 interview, Solo talked about how he got shot with dirty bullets. This, ultimately, resulted in an infection in his lung and bloodstream. Furthermore, Lucci says he feels “blessed” to be alive. Additionally, Solo described hardships, like – having to give himself a shot in the stomach daily and learning to breathe again.

Lucci earned most of his wealth from selling tickets to his concerts as well as selling his albums, especially online. In addition, Solo has a YouTube channel on which he runs advertisements and an Instagram account on which he can publish paid posts.

Therefore, rapper Solo Lucci has an estimated net worth of $2.5 million.

READ THIS NEXT: Who is Porter Robinson?