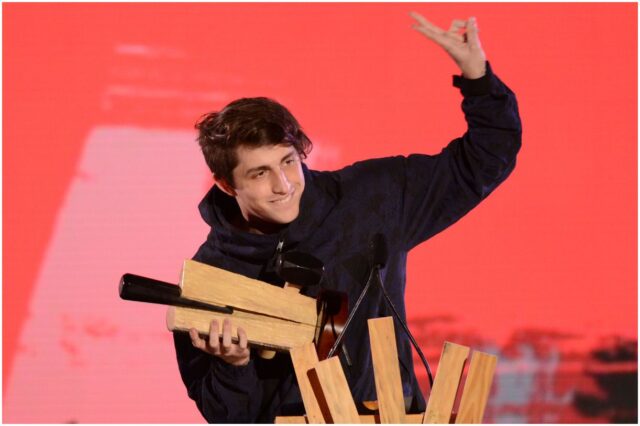 Porter Robinson is an American electronic music producer and DJ who released the multi-genre album Worlds. Additionally, Robinson is renowned for his excellent singles, like – “Language,” “Shelter,” and “Easy.”

His early influences include video gaming music, especially Dance Dance Revolution, a music video game series that was released in Europe and North America in 1999 and in Japan in 1998.

The game was produced by Konami, a Japanese entertainment and gaming conglomerate that is best known for its video games, including Silent Hill, Metal Gear, Castlevania, Frogger, Contra, Yu-Gi-Oh!, Gradius, Pro Evolution Soccer, and Suikoden.

He was born on July 15, 1992, in Atlanta, Georgia, the United States of America, as Porter Weston Robinson.

Robinson grew up and resided in Chapel Hill, North Carolina.

Porter is the second of 4 boys in his family. His younger brothers are named Mark and Robert.

His older brother, Nick, is a former video producer at Polygon, an American video game website that publishes news, reviews, culture, and videos.

Porter found success following the release of his first single, called – “Say My Name,” which earned the #1 spot on Beatport’s Electro House chart.

He was accepted into The University of North Carolina (UNC), where both of his parents are alumni, however, he did not attend because of his newly launched music career.

In 2011, porter signed a deal with OWSLA to release his debut extended play, entitled – ”Spitfire.” As the first release on OWSLA, it reached number one on Beatport’s overall chart (crashing Beatport’s servers upon release) as well as number one on the iTunes Dance chart.

In the same year, he had debut appearances at Electric Zoo, Ultra Music Festival, and Electric Daisy Carnival (an annual electronic dance music festival, with its flagship event being held every year in Las Vegas), which led to him entering the Billboard Top 21 Under 21 and DJ Mag’s Top 100 chart. Furthermore, Porter provided tour support to Skrillex and Tiesto.

On April 10, 2012, he released a single called – “Language” that was relatively different in its production than the “complextro” sound that Porter had become known for, favoring a more melodic sound and a dream-like piano lead. ”Language” was released through the Ministry of Sound worldwide, with the exception of North America – on Big Beat Records.

In that year, Robinson spun a live Essential Mix on BBC Radio 1, made a European headline tour debut, and began residencies at Surrender and XS in Las Vegas. Also, he appeared in the following festivals – Tomorrowland, Coachella (an annual arts and music festival which is held at the Empire Polo Club in Indio, California), Lollapalooza, and Creamfields.

On August 11, 2016, he released a single with French music producer Madeon, entitled – “Shelter,” which was accompanied by a back-to-back tour, named – ”Shelter Live Tour.”

On October 25, 2017, Porter released a new single, called – “EON BREAK” under the alias Virtual Self. A music video was also released on his YouTube channel, containing cryptic messages seemingly focusing on the words  “virtual”, “void”, “angel”, and “utopia” and abstract 3-Dimensional art.

In January 2020, he has announced the release of his second album, ”Nurture.” Porter tweeted:

”I put my whole heart into this.”

Eika is half Japanese and can be found as rikaberri on Instagram.

In early 2022, Robinson announced he is engaged to Rika.

“Life could not feel any better than it does now,” Mikuriya wrote on Instagram.

Robinson has stated that he is very close friends with fellow DJs and record producers Dillon Francis and Madeon.

In 2017, Porter was nominated for two Electronic Music Awards for Live Act of the Year and Single of the Year with Madeon.

He has stated that he did not release or produce any new music in 2015 since he was suffering from depression. During an interview, Robinson declared:

”I’m always fighting anxiety, depression, and OCD. Since 2014, it’s been really hard for me — this week was actually one of the worst of my life.”

”Doing Virtual Self was really cathartic because I really get off on fucking with people’s expectations and not doing the thing that feels obvious.”

In February 2018, he was the cover star for DJ Mag USA, the same month he revealed a 3rd music video from the new album ”Virtual Self.”

When asked about what makes the “perfect dance recording,” Porter responded:

“Everyone will have a different answer for this, but a great hook is really critical. It’s all about structure in dance music. It’s all about the moment something is revealed.”

”Tension and release is the name of the game. Also, the drums have to sit right, dance music is drums — that’s the essence of it.”

Porter has collaborated with high-profile artists, like – Avicii, Skrillex, Zedd, and Madeon.

He is a major fan of anime and Japanese culture and often incorporates these elements into his music.

READ MORE: What is the net worth of Tommy James?

Robinson earned most of his wealth from selling tickets to his concerts as well as copies of his albums (Nurture, Worlds, and Worlds Remixed).

Porter has a YouTube channel that has over 350 million views – meaning about $1 million in revenue.

Therefore, American DJ Porter Robinson has an estimated net worth of $18 million.

READ THIS NEXT: Mysonne Net Worth