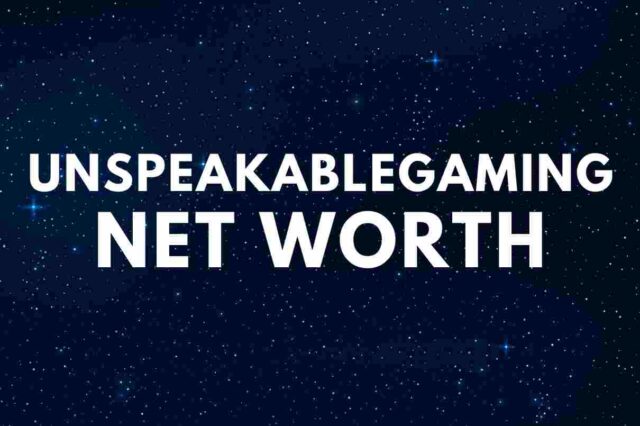 UnspeakableGaming (real name – Nathan) is an American YouTuber who has over 11 million subscribers on his YouTube channel. He gained fame through his Minecraft videos.

Nathan was raised in Houston, Texas.

He started posting Minecraft videos to YouTube on October 10, 2012.

He was 14 years old. Note – he had a channel (currently deleted) before ”UnspeakableGaming” named “Mr gaming 1,000.”

”It was $156,” Nathan said for Chron about his first paycheck from YouTube. He added: ”I didn’t even know getting paid on YouTube was a possibility. I was like, ‘Wow, this is crazy. This is a real thing. I can turn this into something that’s huge.’”

He created a map titled “Island Sprint Parkour” in April 2013.

Nathan started to upload Truth or Dares, Hide N’ Seeks, and Do Not Laughs videos. In addition, he published videos showcasing other video games like Roblox and Fortnite. ”YouTube is very similar to creating your own business,” he said in another interview.

In August 2018, he bought a Lamborghini Huracan Performante. ”Dreams come true. Work hard and I promise you can accomplish anything in life,” Nathan tweeted. He also wrote: ”This has been my dream car for years.”

In March 2019, Nathan along with 36 other YouTubers, including Caspar Lee, Typical Gamer, and Muselk, participated in the Apex Legends Battle Royale, a live-action tournament hosted by MrBeast. ”I am extremely grateful to Apex Legends for funding the award money and sponsoring the video,” MrBeast said in a statement.

UnspeakableGaming used to date Kayco (real name – Kayla Conley), a YouTuber with over 826,000 subscribers on her channel.

The couple first met during chemistry class in high school, and “it just kind of sparked off from there.”

”A lot of you guys probably know my girlfriend Kaylor or Kayco,” Nathan explained in a video. ”She’s been in a lot of videos and I know a lot of you guys absolutely love her and love us together. Unfortunately, we have decided to break up,” he said. ”Our break up was a mutual decision. We both agreed that things were just not working for us. We tried for a really long time and things just weren’t working, so we decided to split. This is a video I never thought I would make but it’s a video that needs to be made, it needs to be addressed.”

”Setting some serious goals, so excited to catch progress.”

Nathan has collaborated with many YouTubers, including:

He is a member of The Squad with Shark (Andrew) and MooseCraft (George).

Nathan earned most of his wealth from ads on YouTube, merch, and sponsors.

On YouTube, Unspeakable has over 12.3 billion views across all his channels.

This means about $50 million in revenue before taxes. His first paycheck from YouTube was $156.

The most popular video on his YouTube channels is ”SURVIVING WITH ASWDFZXC IN MINECRAFT!”

Some of his sponsors are Hot Pockets, EA, and Hot Wheels. Nathan also sells merch on his website – unspeakable.co/collections. He sends his merch to over 130k customers every year.

Therefore, UnspeakableGaming has an estimated net worth of $30 million.

READ THIS NEXT: Who is KidBehindACamera?