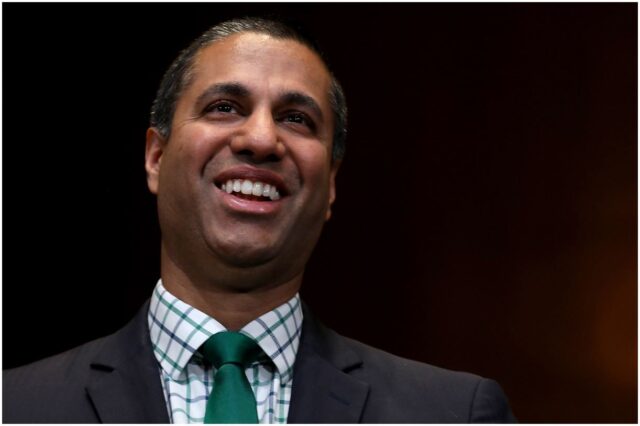 Ajit Pai is an American attorney who served as the Chairman of the United States Federal Communications Commission.

He is the first Indian American to hold the office of the FCC. However, Pai is best known for being a proponent of repealing net neutrality in the United States.

He was born on January 10, 1973, in Buffalo, New York, USA. His mother, Rasha, was an anesthesiologist, while his father, Varadaraj, was a urologist. He grew up in Parsons, Kansas.

Ajit graduated with honors from Harvard University in 1994. Also, in 1997,  he graduated from the University of Chicago Law School.

From 2001 to 2003, he was the Associate General Counsel at Verizon Communications, an American multinational telecommunications conglomerate.

In May 2004, Ajit returned to the Department of Justice to serve as Senior Counsel in the Office of Legal Policy. Ajit held the position until February 2005, when he was hired as Chief Counsel to the Subcommittee on the Constitution, Civil Rights, and Property Rights.

Between 2007 and 2011, he held a few positions in the FCC’s Office of General Counsel, especially serving as Deputy General Counsel. In this role, Ajit had supervisory responsibility for many lawyers in the Administrative Law Division and worked on different transactional and regulatory matters involving the wireline, wireless, internet, cable, media, and satellite industries.

In 2010, he was one of 55 individuals nationwide chosen for the 2011 Marshall Memorial Fellowship, a development initiative of the German Marshall Fund of the US.

Since 2012, Pai has been an appointed member of the United States Federal Communications Commission. Pai was appointed by then-President Barack Obama and was confirmed unanimously by the US Senate.

According to its official website, the Federal Communications Commission:

“regulates interstate and international communications by radio, television, wire, satellite, and cable in all 50 states, the District of Columbia and U.S. territories.”

READ MORE: Who is Heidi Somers?

Net neutrality is the principle that Internet service providers should treat all Internet communications equally and not charge differently or discriminate based on content, website, user, application, type of equipment, platform, or method of communication.

In April 2017, Ajit proposed a repeal of net neutrality rules enacted under the Obama administration. In July 2017, protests were held against Ajit’s proposal.

On December 14, 2017, FCC voted to make the open internet — and the “network neutrality” principles that sustain it — a thing of the past.

”Well, I favor a free and open Internet, as I think most consumers do.”

”My concern is with the particular regulations that the FCC adopted two years ago. They are what is called Title II regulations developed in the 1930s to regulate the Ma Bell telephone monopoly.”

On the day he voted to repeal the Obama-era rules, he said:

“It is time for the Internet once again to be driven by engineers and entrepreneurs and consumers, rather than lawyers and accountants and bureaucrats.”

When the United States Senate voted by 52-47 “to put the Federal Communications Commission’s net-neutrality rules back in place” in May 2018, Pai was said to be “upset,” stating having no net neutrality rules “will help promote digital opportunity” while making:

Since 2010, Ajit Pai has been married to his wife Janine Van Lancker, an allergist in the Washington D.C. area. The couple was engaged to be married just several months after they met.

They met in January 2008 when one of Ajit’s female friends invited him to come to a happy hour at a bar.

“There was something about her. I wanted to follow up as soon as I could.”

When Ajit learned her name, he started researching her online, finding out she was an allergist at the George Washington University Medical Center.

“But of course I couldn’t tell what her personality was like.”

The couple has a son  – Alexander Madhav Pai – as well as a daughter – Annabelle Malathi Pai.

On December 8, 2017, a video was leaked online showing Ajit’s speech held at the annual Federal Communications Bar Association dinner, in which he made a few jokes about the net neutrality controversy and jokingly referred to himself as a “Verizon puppet.”

In a speech two weeks before the Federal Communications Commission’s scheduled December 2017 vote on net neutrality, Ajit was critical of celebrities including Alyssa Milano, Cher, and Mark Ruffalo, for boosting opposition to the planned repeal. In response to criticism from Mark Ruffalo, Ajit said:

He has said that the Federal Communications Commission under former Chairman Thomas Wheeler had “overstepped its bounds,” and the Commission has to take a “weed whacker” to “unnecessary regulations” which hold back innovation and investment.

On November 30, 2017, PewDiePie uploaded a video about Ajit titled – ”The Most Hated Person on the Internet.” Since then, the video gained almost five million views.

Pai was named 47 among the 100 Most Influential People in Healthcare by Modern Healthcare in 2019.

Pai earned most of his wealth by working as a lawyer for Verizon Communications, working for the Department of Justice, and working for FCC.

He also spent $1.4 million to buy a house in Arlington, Virginia. Therefore, Ajit Pai has an estimated net worth of $6 million.

READ THIS NEXT: Is Andy Roy in prison?