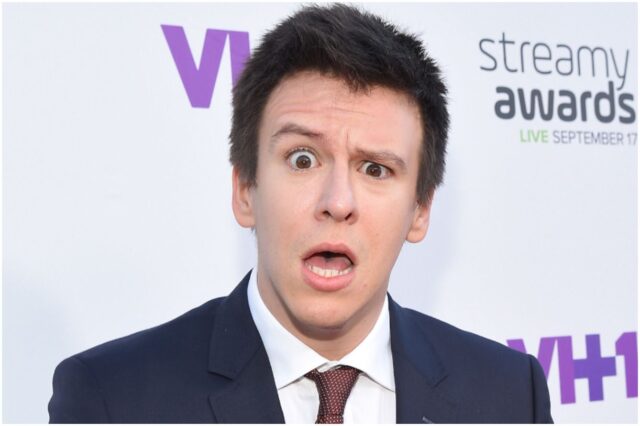 Philip DeFranco, better known online as SXEPhil or Philly D, is an American YouTube personality and news commentator, who is best known for hosting The Philip DeFranco Show.

Philly D focuses on current news, politics, gossips, and trendy events on his YouTube channels where he airs his opinion usually in a satirical manner.

His real name is Philip James Franchini Jr. He holds an American nationality and regarding his ethnicity, he is of Italian descent.

His parents divorced when he was about ten years old, leading his mother to move with him to Asheville, North Carolina.

He graduated from the Asheville-Buncombe Technical Community College. After, he attended East Carolina University.

DeFranco started his YouTube career during his last year at East Carolina University when he created his sxephil YouTube channel, calling it ”The Philip DeFranco Show,” in which he talks about:

“newsie type stuff, and things that matter to [him] today.”

Philip worked as a waiter before uploading his first YouTube video.

His main channel has accumulated over 6.32 million subscribers and 2.7 billion views.

In the late 2000s, his main channel was among the top 5 most subscribed of all time.

In July 2010, along with Toby Turner, Philip co-created CuteWinFail, an online series that has been described as:

In September 2012, it was reported that Philip received around 30 million views a month.

In November 2013, he was a special guest on a live pre-show simulcast for the Doctor Who 50th anniversary from YouTube Space LA.

In 2016, Philip won the Show of the Year award at the Streamy Awards.

On May 1, 2017, he posted a video stating that for the first time in four years he is no longer a part of an MCN (Multi-Channel Network).

In May 2017, he created DefrancoElite, a fan-fun initiative through popular fan-funding website Patreon.

He has promoted a company known as “BetterHelp” a couple of times on his YouTube channels. BetterHelp is an online portal that has over 3,500 US-based licensed professionals that are certified in virtually all help areas.

Plans start from $35 per week and can go up to $55 per week. Many YouTubers called out Philip for his involvement on BetterHelp, including:

Lindsay is a famous YouTube star who shares her excitement on YouTube about making videos about the places she visits.

Meghan Tonjes and Jess Lizama were bridesmaids. The ceremony was officiated by Michael Buckley.

Other YouTubers in attendance included:

Within a week after the dreamy marriage proposal, his wife announced that she and DeFranco were expecting their first child whom she gave birth on the 22nd of April, 2014.

Lindsay gave birth to their 2nd son named Carter William DeFranco, on the 8th of September, 2017.

READ MORE: Who Is Leanna Bartlett?

Philip had ”SourceFed” and ”The Philip DeFranco Show” nominated for awards in the third installment of the Streamy Awards.

In 2013, SourceFed won the Award for Audience Choice for Best Series of the Year.

His fourth channel is SourceFedNerd, where he talks about PC games, movies, and cell phone apps.

In March 2015, he launched a family vlogging channel, ”The DeFranco Fam.”

READ MORE: What is BatDad’s net worth?

His staff consists of 15 members:

He has polycystic kidney disease that he inherited from his father.

Philip says he was raised Roman Catholic; nevertheless, he states that he is an atheist, the absence of belief in the existence of deities.

DeFranco earned most of his wealth from advertisements on YouTube, sponsors, and selling merch (especially T-shirts). Earnings on YouTube are difficult to calculate, however, on average, 1,000 views on a YouTube video brings around $2.

Currently, all his YouTube channels combined have around 4 billion views, meaning about $10 million in revenue before state taxes.

In December 2019, he bought Encino Tennis Court Estate for $4.1 million. The house covers 5,931 square feet with five and a half bathrooms and five bedrooms. Some of the area’s other famous residents include Eva Gutowski, Logan Paul, James Charles, Joey Graceffa, and  Colleen Ballinger.

Therefore, American YouTuber Philip DeFranco has an estimated net worth of $15 million.

READ THIS NEXT: Key Facts About Gino Jennings