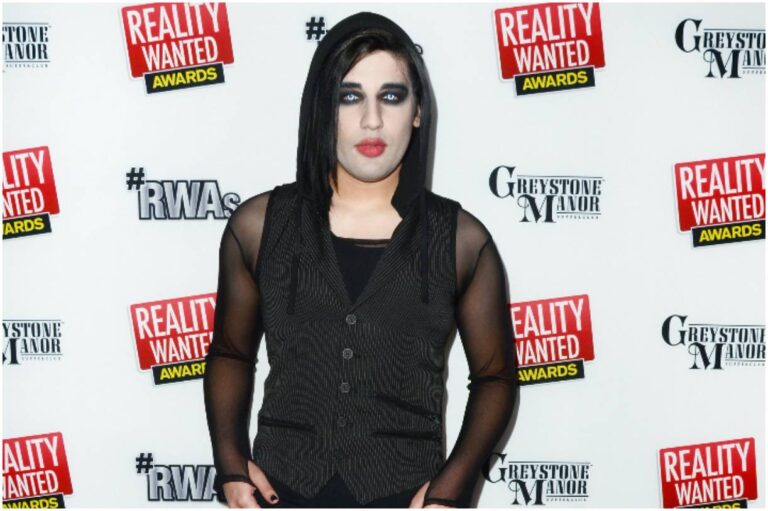 Andrew De Leon is an American opera singer who is best known as a contestant on the 7th season of America’s Got Talent. De Leon was eliminated in the Vegas Round before being brought back for the Wild Card Round.

De Leon never received any formal training and is a self-taught singer.

He was born in 1992 in the USA. Andrew grew up loving goth-inspired hard rock acts such as Marilyn Manson and Rob Zombie (a heavy metal vocalist for the band White Zombie who has also directed horror films). He said that listening to them was an escape for him, as he was an outsider.

His parents had never heard him sing before he performed on AGT.

When asked about when he first got into music, Andrew responded:

”There was always music playing in my house, while I was growing up.”

”When I was in second grade, I had an odd taste in music.”

America’s Got Talent is a televised American talent show competition that is part of the global Got Talent franchise.

Andrew appeared in season seven of America’s Got Talent, which premiered on May 14, 2012.

He won all 3 judges easily, with Howard Stern saying:

“You got up here and blew the roof off the joint, good for you!”

“You’ve been hiding in your room all these years, but you’ve never let the world see who you are or what you are and it’s not that you’re good at anything, you are great.”

During an interview, Andrew said:

”Out of all of the judges, I was scared of Howard, the most.”

”For them, to stand up and give me a standing ovation and receive their feedback on the performance was mind-blowing and it was one of those moments I will never forget.”

Andrew also said that he had never sung in front of anyone. Furthermore, he was emotionally moved by the positive reaction from the crowd as well as his own performance.

After he forgot the lyrics to the opera piece he was singing and stopped singing, De Leon was eliminated during the Vegas Round.

He was brought back by Howie Mandel for the Wild Card Show.

Note – The Wild Card is a concept that was introduced in Season 1 of AGT. With the use of the wild card act, a competitor who was knocked out is given a reprieve and gets to join the others in the competition.

His Quarterfinals performance consisted of singing “Unbreak My Heart” in a Spanish operatic version. Andrew received sufficient votes to be sent to the Semifinals.

His Semifinals performance consisted of singing “Ave Maria.” Unfortunately, De Leon did not receive sufficient votes to be sent to the Finals.

In 2013, he independently released his first album, called – Black Lights. The album is a mix of rock, classical, goth opera, and pop.

He said about the album:

After the success of his first album, Andrew has been joined by John Paul Grasso (guitar) and Hunter Fisher (composer, lead guitar).

Their first live performance was at the 2014 Austin Vampire Ball. He said after the show:

In 2015, Andrew was signed to StandBy Records, an independent rock/metal label originally from Cleveland.

Andrew was convinced to sign with StandBy Records after having a phone conversation with Neil Sheehan, the CEO. De Leon declared:

“I was really impressed with the direction of the label.”

”I was the kid who would want to stay home watching movies and listening to music, when going to school I would be the kid who had their head down and would get tired of the weird looks.”

“I warned you from the start it won’t be the same, now that I’ve let you in this monster can’t be tamed.”

“And I’d like to be able to really show what I can do.”

”I’m just trying my best to work on getting in front of people and being in a comfortable place.”

”I do have a soft spot for a lot of 90’s grunge types of acts, listening to a lot of The Cranberries, Garbage, and Nirvana all of these acts are very influential to me.”

“I think my days of being shy and being an outcast have reached their end.”

”I didn’t consider myself a musician at the time, but looking back at it, it introduced me to a lot of different styles of music, and meeting different artists as well.”

Andrew competed against Tom Cotter on season 7 of America’s Got Talent.

De Leon earns most of his money from selling tickets to his concerts. His net worth increased significantly after he signed with StandBy Records. Therefore, Andrew De Leon has an estimated net worth of $0.55 million.

READ THIS NEXT: Bobby Goldsboro & Wife