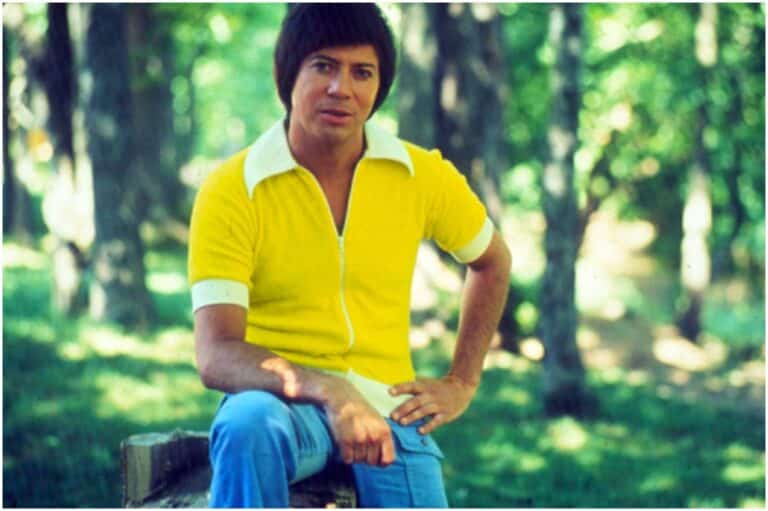 Bobby Goldsboro is an American pop singer and songwriter, who released Gold-certified songs such as “See the Funny Little Clown.” In 1968, he released the song “Honey,” which has sold over one million copies.

He was born as Robert Charles Goldsboro on January 18, 1941, in Marianna, Florida, USA.

Bobby is the younger son of Grace Wynell and Charles Edward Cawthon Goldsborough, who owned and operated a flower shop.

His family moved to Dothan, Alabama, when Goldsboro was a teenager.

At age 12, Bobby had taught himself how to play a borrowed ukulele.

In the early 1960s, Goldsboro played guitar for Roy Orbison for about two years.

He first reached the US chart with a hit called ”Molly” in 1962.

In 1964, he started his solo career by recording the 1st of a string of 16 top-forty hits, “See the Funny Little Clown.” The single was awarded a gold disc and sold more than 1 million copies.

In 1968, he released a single titled – “Honey,” also referred to as “Honey (I Miss You).” It is about the loss of a spouse, and it was No. 1 the week after Martin Luther King, Jr. was assassinated.

“Honey” was the fastest-selling record in the history of United Artists and was certified gold in only 4 weeks. It reached the Hot 100 chart after five weeks.

Moreover, ”Honey” was a #1 song in Australia. In 1975, it re-entered the United Kingdom chart. Bobby first produced it with former Kingston Trio member Bob Shane. This song was written by Bobby Russell.

In 1973, he released a song called, “Summer (The First Time).” It reached number 9 in the UK and was a Top 25 hit in the U.S. The single was a reminiscence about a 17-year-old boy’s first sexual experience.

Bobby has other Top 40 hits, including:

In 1995, Goldsboro launched the 52-episode children’s series The Swamp Critters of Lost Lagoon. The program aired on The Learning Channel and PBS from November 4, 1995, to December 27, 1997.

Instead of getting investors to back it, Bobby funded The Swamp Critters of Lost Lagoon using his own money. Also, each of the main characters’ costume heads contains animatronics that worth about $21,000.

In the 1990s, Bobby composed the music for Evening Shade, an American television sitcom that aired from September 21, 1990, to May 23, 1994, on CBS. The series enjoyed strong ratings during its entire run. The series was produced in association with MTM Enterprises, Burt Reynolds Productions, and CBS Productions.

In 1999, Goldsboro was inducted into the Alabama Music Hall of Fame.

Bobby Goldsboro was married to Mary Alice Watson Goldsboro, but they divorced in 1982.

“Little Things” I wrote very quickly. I had the little riff and I started coming up with a little answer thing. It probably took about an hour, that’s all.”

”People are born with a voice and they can either sing or they can’t sing. When it comes to songwriting, I don’t think it’s something you can teach.”

His 1973 song “Summer (The First Time)” was voted Best Summer Song in a British music poll.

One of Bobby’s compositions, “With Pen in Hand,” was recorded by a few artists, including a Grammy-nominated pop version by Vikki Carr (an American vocalist who has had a singing career for over 40 years) which reached the Hot 100’s top 40 in 1969.

Bobby is a good friend of Glen Campbell, an American actor, television host, songwriter, singer, and guitarist, who released more than 70 albums in a career which spanned over 50 years, selling more than 45 million records worldwide, including one double-platinum album, 4 platinum albums, and 12 gold albums.

He is best known for hosting a music and comedy variety show titled – ”The Glen Campbell Goodtime Hour” on CBS television, from January 1969 until June 1972 as well as a series of hit songs in the 1960s and 1970s.

Bobby earned most of his money from writing (around 52 episodes) and performing (in assorted voices) over 100 new songs for his “The Swamp Critters of Lost Lagoon” children’s video series.

In addition, Bobby earned good money from his singles. For example, his recordings were listed 29 times on Billboard singles.

More importantly, his single “Honey” became the largest-selling record in the world, selling more than 5 million copies. The single even topped “Hey, Jude” by The Beatles.

READ THIS NEXT: Bio of Kyle Norman