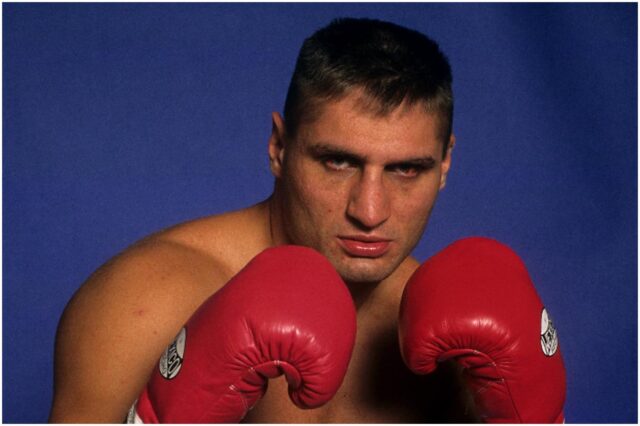 Andrew Golota is a Polish former heavyweight fighter who is best known for being knocked out by three-time world heavyweight champion Lennox Lewis in the first round, for quitting on his stool twice, and for being disqualified against Riddick Bowe for low blows.

As an amateur, Andrew won a bronze medal in the heavyweight division at the 1988 Olympics.

Andrew began boxing at the age of 13. He won 7 Polish national amateur championships.

As an amateur boxer, Golota won a bronze medal at the 1988 Olympics in Seoul, South Korea.

Andrew accumulated 111 wins as an amateur before turning professional in 1992.

In his first match as a professional boxer, Golota knocked out Roosevelt Shuler in 3 rounds.

On July 11, 1996, Andrew had his first high-profile fight vs heavyweight champion Riddick Bowe.

Note – Riddick Bowe won a silver medal in the super heavyweight division at the 1988 Summer Olympics and reigned as the undisputed world heavyweight champion in 1992.

With 37 seconds remaining in the last round, Andrew dropped Riddick with a blatant low punch, directly to the genitals. He was disqualified.

After, a dramatic riot started. The riot was called Event of the Year by Ring Magazine.

About three months after the match, in October 1996, it was announced that Andrew and Riddick would meet again in a rematch that would take place on December 14 in Atlantic City.

In the second match, Golota was again disqualified for low blows. The post-match riot led to 9 spectators who had to be rushed to hospital as well as ten arrests.

In 1997, Riddick announced his retirement from boxing at the age of 29.

In the match against Lennox, Golota only resisted 94 seconds into the first round.

On October 20, 2000, Tyson and Golota squared off in a high-stakes PPV match-up.

After the second round, Andrew retired on his stool saying “I quit” to his cornerman. Later, he was taken by his wife to Resurrection Medical Center on Chicago’s Northwest.

“He got hurt, he got injured and it’s probably the smartest thing he did.”

Dr. Wesley Yapor, a neurosurgeon who treated Andrew, said that Golota sustained a herniated disc between the 4th and 5th cervical vertebrae as well as a fractured left cheekbone.

”If he had sustained another serious blow to the head he could have become paralyzed.”

Al Certo, his trainer for the match, stated:

“At the time of the stoppage I was unaware of how injured my fighter was.”

Recently, Mike Tyson has admitted he was high when he beat Golota in 2000. Mike declared:

“When I fought Golota, that’s the only time I smoked weed and fought. It didn’t affect me. It affected Golota.”

“They fined me a couple of hundred dollars for that stuff.”

In 2013, Mike released his memoir, Undisputed Truth. In the book, Tyson explained how he used drugs before other fights as well – his loss to Danny Williams in July 2004 and TKO of Lou Savarese in June 2000.

On November 13, 2004, Andrew received another world title shot in a row. Golota lost by unanimous decision vs John Ruiz, a former professional boxer who held the WBA heavyweight title twice.

On May 21, 2005, Andrew received his third world title shot against “Relentless” Lamon Brewster, a former professional boxer. Andrew lost when Lamon knocked him down three times inside the first round.

In 1998, he published his autobiography, named – Pierwsza Autoryzowana Biografia (The first authentic biography).

Andrew Golota is married to Mariola, a lawyer in Chicago.

He has two children, a daughter Alexandra and a son Andrzej.

Andrew has also participated in the Polish version of “The Mole.”

In 2012, reports appeared that he might be facing deportation from the United States if the judge takes into account his criminal past.

Note – a criminal background check was triggered when Andrew filed paperwork to become an American citizen.

”I’m just hopeful that it’s going to turn out OK. It’s kind of out of your hands. Andrew paid dearly for whatever he did.”

His criminal records are:

He lost all 4 bids to win the WBC, IBF, WBA, and WBO heavyweight titles. The matches were against:

For being disqualified twice for low-blowing Bowe in back-to-back fights, Andrew is also known as the “Foul Pole.”

During the fight with Mike Tyson, Golota complained of several head butts by Mike.

In 2010, Andrew appeared in the Polish edition of Dancing with the Stars with partner Magdalena Soszyńska-Michno.

Golota earned most of his wealth from being a professional heavyweight fighter. He fought professionally for 21 years.

For his match against Tyson, Andrew received $2 million, win or lose.

In addition, Andrew earned some money from his amateur boxing career, where he had 111 wins and a bronze medal at the 1988 Summer Olympics. Therefore, Andrew Golota has an estimated net worth of $7 million.

READ THIS NEXT: Who is Massy Arias?