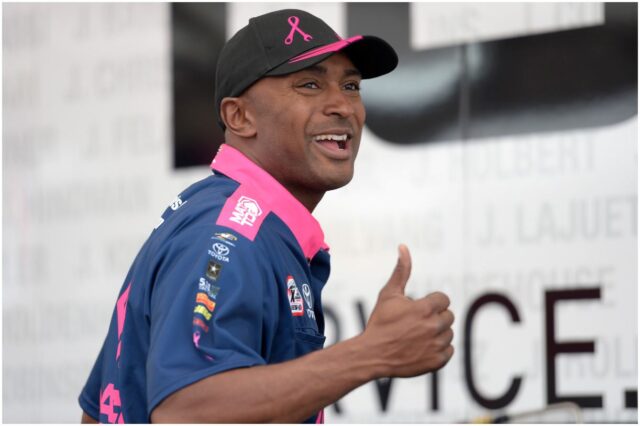 Antron Brown is an American drag racer who is best known for winning the 2012, 2015, and 2016 Top Fuel championships.

His father Albert was a drag racer at the sportsman level and ran a septic tank service.

He actually lived in Trenton, New Jersey until he was six years old. Following the death of his grandfather, his family moved to a 10-acre farm in Chesterfield Township.

After first winning a major auto racing title, he said:

”I am just glad we could bring it home for Don Schumacher Racing.”

Brown went on to say:

”To win the world championship the way the competition has been this year in Top Fuel and to run and compete how we’ve been doing all season long is just phenomenal.”

In August 2015, Antron became the first driver to complete a run in 3.6 seconds. This time became a national record time at Brainerd, Minn.

In 2018, he had one of the worst seasons in his drag racing career. According to statistics, Brown managed just one win.

Antron Brown is married to Billie Jo Brown. They met in 1998, at Antron’s first Pro Stock Motorcycle race in Gainesville.

The couple has a daughter and two sons.

His 13-year-old son, Anson, is also into drag-racing. Anson represents the 4th generation of drag-racing Browns. Antron declared about this:

“It’s always been fun, but it also can teach you so much. It goes back to what my grandpops instilled into my dad and uncle, and they instilled that into me.”

”Now I try to take those same morals and values and instill them into my children.”

”Our main focus is to be in a good position heading into the Countdown to give us a chance to bring it home.”

”There’s nothing that can compare you to the rate of acceleration in a Top Fuel car.”

”We became a part of history as one of the few and only Top Fuel drivers to ever win Indy.”

“To be truthful, when we come in here, we’re here to bring the pain to other teams.”

”The goal is to win as many races as we can, but it will be tough because the competition is outstanding in Top Fuel.”

He co-hosts the television series with:

Brown appeared in episode 3 of Idris Elba: No Limits.

He also had an appearance as an appraiser in episode 8 (“The Fast and The Curious”) of the 3rd season of Storage Wars, an American reality television series that premiered on December 1, 2010.

Season one of Storage Wars had 19 episodes, 17 of which were filmed at different self-storage facilities throughout California.

The reality television series can be seen internationally in:

Gateway Motorsports Park has always been a favorite stop for Antron and his Don Schumacher Racing Matco Tools/U.S. Army Top Fuel dragster team. For example, he has won the last 3 Top Fuel events and 4 overall at Gateway.

“It’s the atmosphere, the people in the stands, everything. It’s one of the best tracks in the country as far as a racing surface.”

”When you get the great weather with the great people and the time of the year we run, you mix all that together and our team thrives in that type of atmosphere.”

He won sixteen events in the motorcycle division. Additionally, Antron had a best finish of second in points in 2001 and 2006. However, Brown left the motorcycled division and moved to Top Fuel dragsters in 2008.

Brown earned most of his wealth from participating in drag racing. His salary was not released to the public.

According to his website, Brown has several sponsors, including:

Therefore, American drag racer Antron Brown has an estimated net worth of $5 million.

READ THIS NEXT: Who is Brooks Laich’s wife?