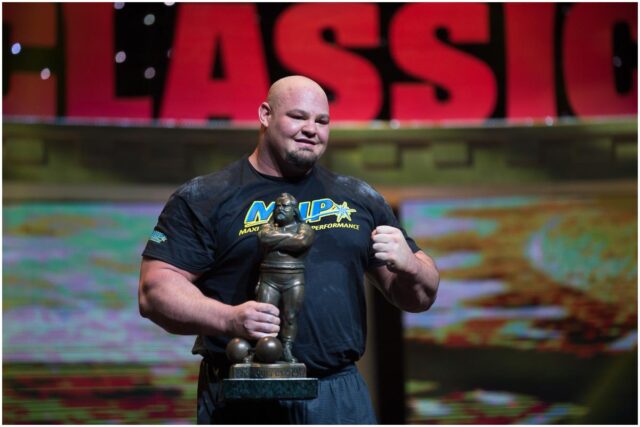 ”I played basketball in college on a scholarship, and I got into weight training as I was studying to be a strength,” he told Esquire in 2015.

His first strongman competition was the Denver Strongest Man contest in October 2005. In June 2006, he went pro.

In 2009, Shaw reach 3rd place at the Strongest Man on Earth competition in Canada.

On November 21, 2010, he won the inaugural Jón Páll Sigmarsson Classic.

In December 2020, he hosted the first Shaw Classic competition.

Keri has her own fitness business – ”Fit Mommy Academy.”

Shaw eats seven meals a day. Every meal is packed with carbs and protein, resulting in over 12,000 calories a day.

His regular diet includes about eight eggs and several slices of cheesecake per day. His diet was designed by a dietician with the purpose to “make me as strong as I possibly can be.”

Brian said for Bar Bend about his diet: ”I’m eating basically every two to three hours all day long, and that’s a big thing.” In another interview, Brian explained: ”Each meal I would say takes probably at least 20 minutes” or ”I’m just eating to be the strongest human being on the planet,” he said.

Shaw weighs somewhere between 400 and 440 pounds.

”I’m actually kind of excited for the salad. I know that sounds weird.”

”It is great to be able to test my strength against the strongest men in the world.”

”Find whatever works for you and be consistent with it.”

”Pushing to that extra level is where you win or lose.”

”I always try to evolve and get better and go back to the drawing board and look at where I can improve what weaknesses I have.”

Some of the records he holds in the official Strongman competition are:

Brian was featured on History Channel’s original series The Strongest Man in History (2019).

He has the distinction of being the first person ever to win both the Arnold Strongman Classic and the World’s Strongest Man competition in the same year.

Eddie Hall (the winner of the World’s Strongest Man 2017 competition) sometimes appears in his YouTube videos.

Shaw earned most of his wealth from participating in strongman competitions. For instance, the winner of the World’s Strongest Man competition earns around $80k.

He earns money from ads on his YouTube channel that has more than 260 million views (about $700k in revenue).

READ THIS NEXT: Bio of Mike Webster