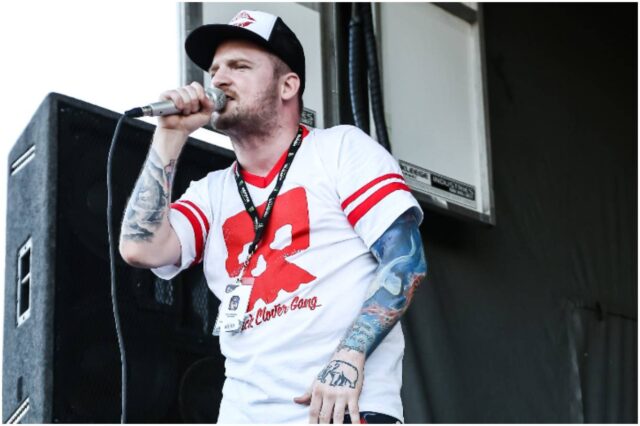 Mac Lethal (real name – David McCleary Sheldon) is a rapper who released the album 11:11 in 2007 and toured with the band Atmosphere in the same year.

He is best known for a viral YouTube video in which he raps over the beat to “Look at Me Now” while making pancakes.

Mac once joked about his childhood:

”I was actually born in Kansas City but have visited Mars many times.”

”I don’t like the food there but it’s tolerable… the wine is great, especially since its served by 6 headed women…”

During high school, Mac won rap battles in his native Kansas City. These victories gave him a considerable local buzz.

In 2004, Mac signed to Rhymesayers Entertainment.

In 2006, alongside Jeremy Willis, David began the Black Clover Records.

In the follow-up year, Sheldon released a studio album, titled – ”11:11,” on Rhymesayers Entertainment.

During an interview, he said about BJJ:

”I think that I’ve always been drawn to the idea of jiu-jitsu. It’s a very analytical martial art. It’s technique over strength, technique over muscle.”

During a 2015 interview, Mac confessed:

”I am now a blue belt. I train at Kansas City Brazilian Jiu-Jitsu now, and Professor Jason Bircher is my trainer/friend.”

Sheldon went on to say:

”He usually makes people wait about 3 years per belt.”

Mac Lethal is a married man, but the name of his wife was not released to the public.

In February 2019, David uploaded a photo of his wife, writing:

”Happy Valentine’s Day to my wife and the mother of my children. I love you!”

”It’s insane how many huge creators exist on social media — with millions upon millions of followers — and I’ve never heard of them/seen any of their content.”

”I regularly see people on YouTube with 5-10 million subscribers, and I’ve never seen a single second of their content.”

”The reason that viral videos work is because people feel like they have to share it before they even watch it.”

”I’d argue podcasting as a medium is stagnating more than it’s booming. Tons of people still make money, but it’s so oversaturated at this point it seems to have peaked in terms of growth.”

Some of his released singles are:

Sheldon was a radio host on KRBZ 96.5 the Buzz show, Black Clover Radio, an alternative rock station in Kansas City. It is owned by Entercom Communications. The station uses the brand name 96-5 The Buzz.

During an interview, Mac said about his musical influences:

”I think most of my early influences were people like Ice Cube, Ice-T, Dr. Dre, and Snoop Dogg. I was really into west coast gangsta rap.”

David can rap 400 words in one minute.

He runs a Tumblr feed – “Texts from Bennett,” in which he posts text message conversations between himself and his cousin.

In June 2019, he had a beef with Canadian-born rapper Tom MacDonald.

READ MORE: Who is Remy Ma?

David earned most of his wealth from his music.

He has several published albums (Congratulations, Irish Goodbye, 11:11, Winter Heartbreak II, and Men Are from Mars, P##nstars Are from Earth). In addition, he was a radio host and is a TV show host.

Additionally, Lethal has a YouTube channel that has over 303 million views (meaning $900k in revenue before taxes).

Therefore, American rapper Mac Lethal has an estimated net worth of $2.5 million.

READ THIS NEXT: Vitas Net Worth