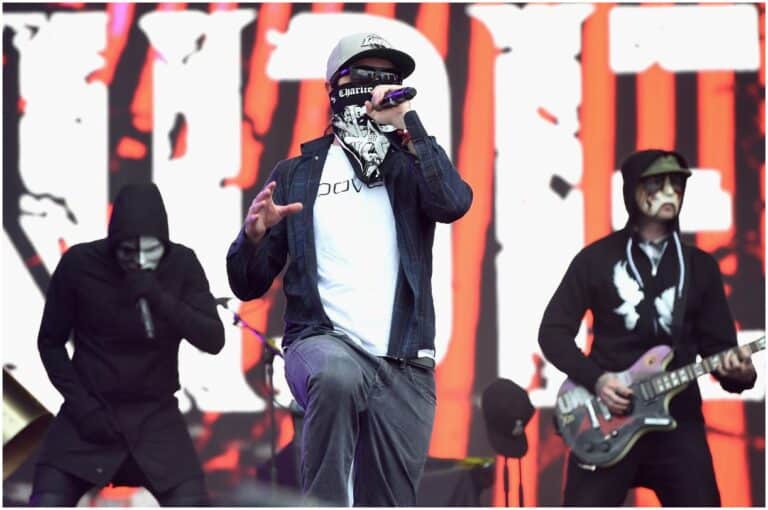 Charlie Scene (birth name – Jordon Terrell) is an American songwriter and rap-rock artist who is best known for being a member of the band Hollywood Undead. He typically raps about kicking ass, drinks, drugs, girls, and partying, and is featured in almost every song from Hollywood Undead.

Terrell is the main rapper in Hollywood Undead, a band that formed in 2005. The band members currently consist of:

Hollywood Undead’s debut record Swan Songs came out in September 2008. The album sold 21,000 copies and reached No.22 on the Billboard 200 in its first week of release.

The set includes a CD of:

On January 8, 2013, Hollywood Undead released the third studio album, called – ”Notes from the Underground.” The album peaked at No. 1 on Canada’s Top Albums chart and No. 2 on the Billboard 200 chart. Also, it sold more than 53,000 copies in its first week.

Terrell said about the single ”Lions” from the album:

”That song was written by a guy in the band, Johnny 3 Tears. I think he must be like a big Lion King fan or he thinks of himself as Mufasa. He loves lions.”

Jordon went on to say:

”I never knew that he loved lions so much, until I heard that song. But, the melody is super catchy, and it’s a good song.”

Interesting fact – all of the members of Hollywood Undead wore signature masks.

Hollywood Undead started their YouTube channel on August 13, 2008. The channel has over 1.41 million subscribers and more than 497 million views.

The couple has one child, named – Jack Charles Terrell.

”My sunglasses, I gotta bring my sunglasses, yeah because I wear them on stage and if I don’t have them on I’d probably look stupid, gotta have my shades on me.”

”People in the group have an idea or collectively have ideas.”

During a 2017 interview, Jordon said that his favorite movies are:

His brother plays the main character in the ”California Dreaming” and ”Been to Hell” music videos.

Terrell has tattoos on his knuckles that mention his dad and mom.

Jordon is a big fan of American actor Charlie Sheen. Actually, that’s what inspired his stage name. Interestingly, both share the same birthday, but, the actor was born 20 years before Terrell.

In December 2009, the band won Best Crunk/Rock Rap Artist at the Rock on Request Awards.

Terrell doesn’t like being called Jordon by his fans.

In April 2009, Hollywood Undead toured with Skrillex (American electronic musician) as “Sonny and the Blood Monkeys.”

One time, Skrillex went on tour, but Deuce (a member of Hollywood Undead until early 2010) didn’t show up, so Terrell sang all his parts.

During an interview, Terrell said about his mask:

”I used to wear Del Taco bags, a fast-food restaurant, because I couldn’t afford a Jason mask, like these guys did, so I just popped a bag on after I had a couple of delicious tacos.”

”But, it was so annoying wearing that thing, so I switched to a bandanna and that made it alot easier.”

His bandana looks really close to his Desperate Measures bandana.

Charlie is classified as the “gangster” of Hollywood Undead.

When asked about his favorite horror films, the musician responded:

”I watch movies on Netflix all the time but I forget the names. But I saw a movie called The Pact that was pretty good.”

”I saw The Innkeepers and that was really good.”

Terrell earns most of his wealth from being part of the band – ”Hollywood Undead.” They make money from selling merch (official website – store.hollywoodundead.com), selling tickets to their concerts as well as selling their albums.

In addition, Hollywood Undead make a good income from sponsors and advertisements on their YouTube channel (so far, about $1 million in revenue). Therefore, Charlie Scene has an estimated net worth of $2.1 million.