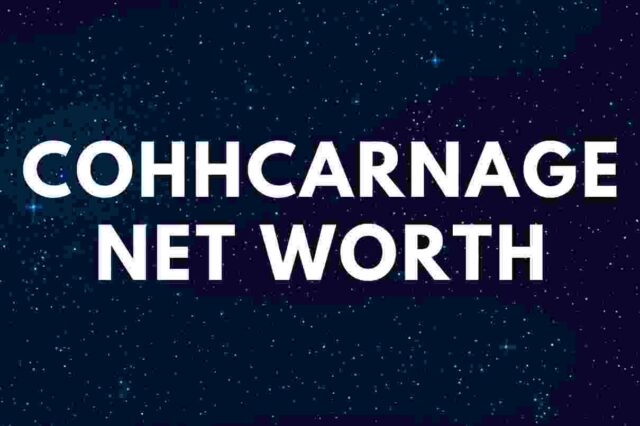 CohhCarnage (real name – Ben Cassell) is an American video game streamer known for his 100% playthroughs of a number of big franchises.

He is also the founder of ”The Cohhilition,” a website dedicated to game discussions.

Starting in 2013, Cassell is streaming on Twitch. At the time, Ben was attending Full Sail University. Initially, he didn’t have plans to stream full-time.

”After four years, I said, ‘You know what? I’m streaming every single day, but no more goals, no more stretches. I’m just going to stream every day,’” Ben said for Kotaku.

One of the first games he streamed on the platform is Defiance, an SF-themed persistent world MMO third-person shooter developed by Trion Worlds.

On June 7, 2013, Cassell started his YouTube channel (over 248,000 subscribers), where he uploads videos with his streams from Twitch.

In March 2019, he was featured in ”Living the Stream,” a documentary that explores the world of online video game streaming on Twitch. The documentary features numerous streamers, including – Ellohime, Lilypichu, Mendokusaii, Scarra, DisguisedToast, Michael Grzesiek, and Pokimane.

On April 6, 2019, Cassell hit the incredible streak of 2,000 consecutive days on Twitch. ”I… uh… have no idea what to do tomorrow,” Cassell said. During the stream, Ben received an anonymous $2,000 donation. He ended his 2,000th day by playing some Pathfinder: Kingmaker. He took April 7 off.

In May 2019, Ben questioned Twitch’s sub-only streams feature on the platform. ”Honestly, it’s going to be used very wrongly, in a lot of ways,” Cassell commented. He continued: ”Just wait until the ASMR streamers, and the Just-Dancing-little-clothes streamers start saying ‘Hey, I’m going to be wearing this much for my normal stream, but tune into my Sub-Only stream later when I’m only wearing this outfit.’”

In June 2020, CohhCarnage received a $32,000 donation during his charity stream for St Judes Children’s Research Hospital. ”I’m half looking at chat scared having some guy like ‘no, no, no, my cat hit the keyboard,’” he said. Note – the charity stream event has raised close to $3.5 million.

”This is not a decision I make lightly,” said in a statement CohhCarnage. The streamer also said: ”OPG has an army of talented people who work there. I wish them the best.”

”I am no longer the CEO of OPG,” tweeted Omeed Dariani. ”OPG is a special company. .. Please don’t destroy it because you’re angry at me,” he added.

At the end of July 2020, it was reported that Ben inked an exclusive management deal with the gaming management company, Loaded. CouRageJD, Benjamin “DrLupo” Lupo, AnneMunition, Michael “Shroud” Grzesiek, and Tyler “Ninja” Blevins are also part of Loaded.

In October 2020, CohhCarnage signed an exclusive streaming contract with Twitch. ”Having been on the service for over 7 years now, Twitch is my home,” he tweeted. Cassell also wrote: ”I’m extremely happy to be announcing that I’ll be joining them on an exclusive basis moving forward.”

READ MORE: Who is SypherPK’s wife?

CohhCarnage is married to Laina.

In March 2020, he announced that he would no longer stream on Thursdays. ”My wonderful wife @LainaCarnage has been dealing with me working almost every day with two kids, and it’s time she gets a full day to herself every week,” CohhCarnage explained.

The couple has two kids, Roen and Kai.

”Life is short, and it comes at you fast. Savor the moment and hug those you love.”

”Sometimes, what you respond to is just as important as what you don’t respond to.”

His name is a spelling variant of the Hawaiian name, Ko. ”It always stuck with me as an interesting name, as I’d never heard anything like it before that time,” Ben explained. ”Carnage” was the name of a guild he was a member of.

Cassell earns most of his wealth from streaming on Twitch, ads on YouTube, and sponsors.

On Twitch, Ben has over 13,000 subscribers, meaning $27,500 in revenue per month. Also on this streaming platform, Cassell makes money from donations from followers, sponsors, and ads. In October 2020, he signed an exclusivity deal with Twitch.

On YouTube, CohhCarnage has more than 235 million views — about $500k in revenue. Discord app and Corsair also sponsor him.

Therefore, Twitch streamer CohhCarnage has an estimated net worth of $5.5 million.

READ THIS NEXT: Who is ChocoTaco?