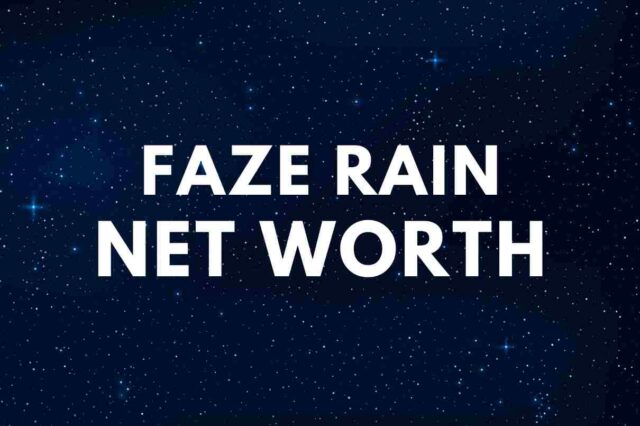 Shat has 2 step-siblings and a biological sister.

He gained fame by playing the first-person shooter video game Call of Duty. Later, Shat played other games, like Fortnite and CS: GO.

At the time of writing, the channel has more than 5.41 million subscribers.

On November 19, 2011, Nordan started a second YouTube channel where he usually publishes vlogs. It has over 1.71 million subscribers.

In 2016, Shat and other members of FaZe Clan were involved in a CS: GO gambling sponsorships controversy. The investigation was done by a YouTuber known as HonorTheCall.

CSGO Wild co-owner Gagey explained the site’s relationship to FaZe Clan. ”Banks, Rain, and a few other team members got paid in return for promotion,” he said. Gagey added: ”Our promoters are paid to play on their own and simply entertain their fan bases.”

”My motivation for doing it was at the time, we weren’t making enough money to buy a CS: GO team,” FaZe Clan co-owner Richard “Banks” Bengston said in 2020.

Nordan had a major mental breakdown in April of 2018.

In July 2018, Shat detailed these struggles in a video, where he said that his success and money didn’t reduce his depression and anxiety.

”It didn’t cure anything,” Nordan stated. He continued: ”It didn’t fix all the actual problems I have in my head that I don’t even know why I have.”

In December 2018, the Canadian YouTuber checked himself into a facility for his struggles. ”I ended up in the hospital again and on my way to a psych ward,” Shat wrote in a tweet. ”Those of you dealing with suicidal thoughts and are contemplating it, please don’t do it.”

At the end of May 2020, he was asked to move out of the mansion shared by FaZe Clan members due to untreated mental health issues and issues with drug abuse. ”Kicked out of FaZe House All fair sad boy energy too high,” he tweeted.

One fan accused Banks of kicking Shat out of the mansion. ”You’re a f####g moron and have no clue what you’re talking about,” FaZe Banks replied. ”You don’t know even 1% of what Rain’s dealing with or going through right now.”

In June, Nordan wrote on Twitter that: ”FaZe is treating me so unfair.” The YouTuber also wrote: ”After everything I did for you? After letting you not pay me back for 5 years and let it slide?”

”We’ve offered you help numerous times,” FaZe Banks said. ”We’ve explored so many different options to help you solve your problem. You have shut them ALL down.”

”We are asking for privacy and compassion while we try to help Nordan through a difficult time,” stated FaZe Clan in a statement on July 1st. The gaming organization added: ”FaZe Clan does not condone his behavior and use of illegal drugs, and we have been working relentlessly to get him professional help.”

In July, former Los Angeles Lakers Rick Fox has offered to help Shat. ”Yo @FaZe_Rain don’t know where you are right now – if you are in LA, I’ll come to you ASAP, and we can talk,” Rick Fox tweeted.

In August 2020, Rain has asked his followers not to abuse prescription drugs. ”Please quit the benzos and opioids,” he said. ”I can’t walk anymore & get 30 seizures a day.”

Nordan earns most of his wealth from sponsors and advertisements on YouTube.

Both his channels have over 1.2 billion views, meaning about $3.5 million in revenue before state taxes.

Therefore, FaZe Rain has an estimated net worth of $2.5 million.

READ THIS NEXT: Who is Dakotaz?