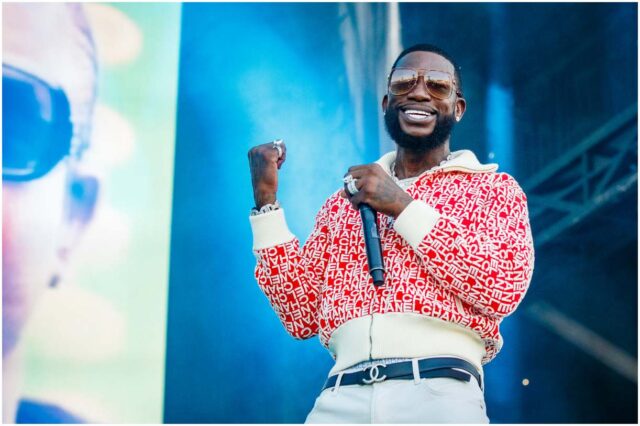 Gucci Mane (birth name – Radric Delantic Davis) is an American rapper and actor, who had a role in the 2013 Harmony Korine film – ”Spring Breakers.”

Mane is best known for his singles “Wasted” and “Gucci Time.”

The rapper has been called “the most influential underground rapper of the past decade” as well as an “avatar of East Atlanta.”

During the 4th grade, Davis moved to Atlanta with his single mother.

Mane began rapping when he was 14 years old.

In the follow-up year, he released another album, titled – ”Hard to Kill.” The album included the hit single “Freaky Gurl,” which reached number 62 on the Billboard Hot 100, number 19 on the Hot R&B/Hip-Hop Songs, and number 12 on the Hot Rap Tracks.

Later that year, he made his acting debut in the film – ”Birds of a Feather.”

On March 15, 2013, he announced that Waka Flocka Flame (a close friend and a frequent collaborator) was “dropped” from 1017 Brick Squad Records.

On June 17, 2016, he made his first performance since being released from prison at an Atlanta club – ”Elan Mansion.”

In 2017, Gucci collaborated with Jake Paul on the song “Why Me.”

In 2020, the rapper released another album, called ”So Icy Summer.”

In April 2001, he was arrested on cocaine charges. Mane was sentenced to 30 days in the county jail.

On September 30, 2013, it was revealed that the American rapper would serve 183 days in jail on charges of:

On May 13, 2014, he pleaded guilty to possession of a firearm by a convicted felon.

Davis agreed to a plea deal which would result in him being in prison until late 2016.

After the sentence was given, the district court judge Steve Jones said:

“According to young people – my nieces and nephews – you are quite cool.”

“You’re still a young man, and you can still do a lot if you follow and abide by the law.”

Since he was not initially being credited for the time he served while waiting for his court date, Davis was released from prison on March 26, 2016, ahead of his scheduled September date.

The rapper served his sentence in the US Penitentiary in Terre Haute, Indiana.

After he was released from prison, Davis was put on house arrest and confined to his Atlanta mansion.

During an interview, Mane said that going to jail ‘100 percent’ saved his life. He also said:

“I was outta control. I wouldn’t  want to do it over, but in hindsight, it helped me.”

On October 17, 2017, Gucci Mane married Keyshia Ka’oir, a Jamaican model, businesswoman, and the founder of Ka’oir Fitness and Ka’oir Cosmetics.

They actually first met while filming on one of Mane’s videos. She said:

“I think it was love at first sight. He was nothing like I expected him to be.”

“I got out the feds 3 years ago today. My wife was just a huge inspiration…Thank You.”

According to reports, Mane spent around $1 million on his wedding to Ka’Oir.

He has a son, named – Keitheon Davis with his ex-girlfriend Sheena Evans.

His wife, Keyshia Ka’oir, is the mother of 3 children – one son and two daughters, that she had before her marriage to Davis.

On September 19, 2017, Davis published a book, titled – ”The Autobiography of Gucci Mane.”

Mane started to write on his book while he was incarcerated in a maximum-security prison.

In his autobiography, Mane details about his amazing career as well as his dark past – drug addiction, the murder charge, and years behind bars. He also writes about the streets of East Atlanta and his roots in Alabama.

”I was in jail, I got out, I’m a comeback story. I’m so glad that everybody, like, celebrated me, you know welcomed me home.”

“When I do put my songs out, I gotta put out a serious project that everybody gonna like.”

”I have seen so many people staying in shotgun houses, or not really having good shoes on their feet.”

Davis was established as a major influence on other Atlanta artists like:

Mane has worked with artists such as:

Mane earned most of his wealth from composing and releasing his studio albums and singles. Some of his best hits are – Black Beatles, Ferrari Boyz, Murder was the Case, Trap-A-Thon, Hard to Kill, and Trap House.

He also sells t-shirts, hoods, hats, and socks on his website – store.warnermusic.com/atlantic-records/artists/gucci-mane.html.

Moreover, Mane received $1 million from appearing in his own reality TV show with his wife. Additionally, he has a book published and has a YouTube channel with over 2.9 billion views (about $9 million in revenue).

Therefore, rapper Gucci Mane has an estimated net worth of $15 million.

READ THIS NEXT: Michael Wolff Net Worth