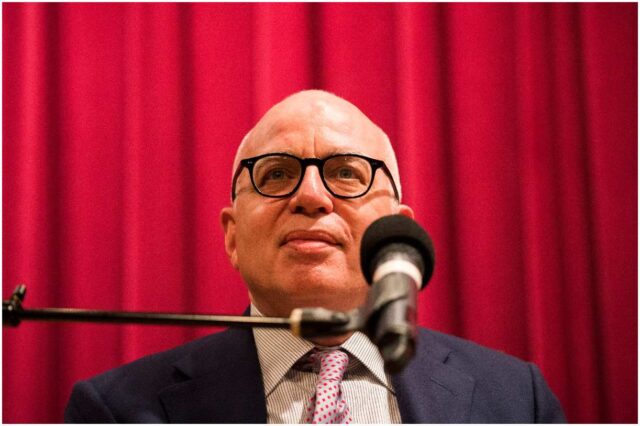 Michael Wolff is an American columnist, journalist, essayist, and author who released the controversial book “Fire and Fury: Inside the Trump White House” in 2018.

Wolff is also a regular contributor to GQ UK, The Hollywood Reporter, and USA Today.

Paul Farhi, a writer for Washington Post, said that Wolff:

“has a penchant for stirring up an argument and pushing the facts as far as they’ll go.”

Wolff is the son of Marguerite (Vanderwerf) “Van” Wolff (a reporter for Paterson Evening News) and Lewis Allen Wolff (an advertising professional).

While attending college, Michael worked as a copy boy for The New York Times.

In 1991, he launched Michael Wolff & Company, Inc., a company that specialized in book packaging.

In August 1998, Michael was recruited to write a weekly column by New York magazine.

In 2005, he joined Vanity Fair as its media columnist.

In 2008, Michael wrote a biography of Rupert Murdoch, an Australian-born American media mogul who formed a close alliance with prime minister Margaret Thatcher in the 1980s.

In 2010, Wolff became editor of the advertising trade publication Adweek.

In the same year, Wolff received the Mirror Award in the category Best Commentary: Traditional Media for his work in Vanity Fair.

In 2011, Wolff was appointed at the helm of Adweek magazine. About one year later, Michael left that position.

Fire and Fury: Inside the Trump White House

The book became a New York Times number one bestseller. After the release, Donald Trump attacked Wolff labeling him a “fraud,” and the book, calling it:

“a complete work of fiction” and “a disgrace.”

Many critics and reporters have expressed skepticism about its key claims.

“This is a guy who made up a lot of stories to try to sell books.”

After published excerpts of alleged quotes and shocking details from White House aides, the book became the top-selling book on Amazon.

“This latest book is just another attempt by Wolff to line his own pockets by pushing lies and pure fantasy aimed at attacking the President.”

Tony Blair, former UK Prime Minister, has described an allegation about him in ”Siege: Trump Under Fire” as “a complete fabrication” and “absurd.”

”Michael Wolff is a total loser who made up stories in order to sell this really boring and untruthful book.”

”He used Sloppy Steve Bannon, who cried when he got fired and begged for his job.”

In an interview with NBC’s Today show, Wolff said Mr. Donald Trump’s staff regard the president as they would an infant. Michael said:

“I will tell you the one description that everyone gave, everyone has in common. They all say he is like a child.”

In a different interview, he explained:

“Everything in this book is something that I concluded is accurate and true.”

During an interview for the Yahoo News podcast “Skullduggery,” Wolff declared:

Michael Wolff married Alison Anthoine, a co-founder of Quantum Media. In 2009, they began divorce proceedings. It is unclear if the two are still married.

Wolff and Alison have three children.

His released books are:

READ MORE: Who is Jennelle Eliana?

“Casualness is the enemy of pretense.”

”I think he’s {Steve Bannon} incredibly insightful. I think he’s the one person of all of the people I’ve spoken to about this who really gets Donald Trump.”

“Once a day, I cast my eyes heavenward and say, ‘Thank you for Donald Trump.’”

“Trump lived, like Hulk Hogan, as a real-life fictional character.”

“George W. Bush, on the dais, supplied what seemed likely to become the historic footnote to the Trump address: “That’s some weird shit.”

Wolff earned most of his wealth from selling his eight books. Michael became well-known for writing about the lives of the rich and powerful, frequently writing with bombastic and colorful language.

He is also a regular columnist for the Guardian, New York Magazine, British GQ, Hollywood Reporter, Vanity Fair, and USA Today. His book – Fire and Fury sold over 1.8 million copies.

Therefore, American journalist Michael Wolff has an estimated net worth of $20 million.

READ THIS NEXT: Who is Kuba Ka?