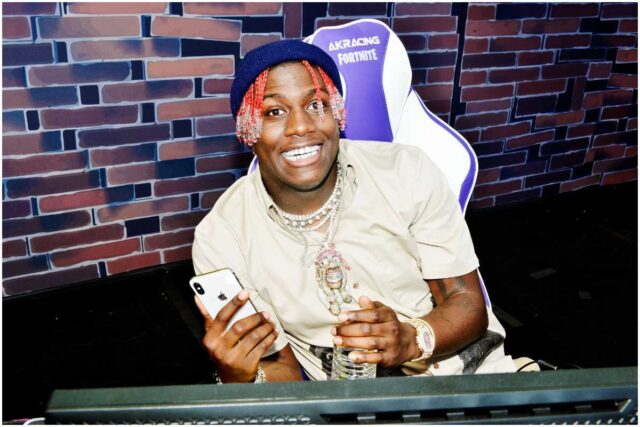 Yachty first gained an appreciation for songs like “Minnesota” and “One Night” off his debut EP Summer Songs.

The Guardian called his music:

“fun, hook-first pop rap oblivious to songcraft and structure that doesn’t take itself too seriously, with very little interest in legacy and even less in rap canon.”

Rolling Stone described his music as:

His songs have sampled sounds ranging from the startup sound of a GameCube console, the theme from Rugrats, Charlie Brown, and Mario Bros. Yachty has called his style “bubblegum trap.”

He was born on August 23, 1997, in Mableton, Georgia, USA. His father is a photographer. He has a sister named Nina.

While attending school at Pebblebrook Highschool, he worked at McDonald’s.

In 2015, Lil attended college at Alabama State University for two months before dropping out.

In the same year, in order to make it big in life, Lil moved from Atlanta to New York and adopted the name “Yachty.”

He first came to prominence in December 2015 when the SoundCloud version of his song “One Night” was used in a viral video. In August 2015, he released his single ”Minnesota.”

In April 2016, Yachty collaborated with D.R.A.M. (an American rapper, actor, songwriter, and singer who signed to Empire Distribution and Atlantic Records) on the hit song “Broccoli,” which peaked at number five on the Billboard Hot 100.

In May 2016, Yachty featured on Chance the Rapper’s Coloring Book mixtape. Chance the Rapper is an American singer, songwriter, rapper, actor, and activist who began to gain mainstream recognition in 2013, after releasing his mixtape, ”Acid Rap.”

In 2016, he embarked on his nationwide ”Boat Show tour,” which stopped in select cities in Canada and the United States.

On June 10, 2016, Lil announced that he had signed a joint venture record deal with Capitol Records, Quality Control Music, and Motown Records.

The 3rd promotional single, called – “X Men,” was released on May 18, 2017. It featured a guest appearance from American rapper Evander Griiim and was produced by 30 Roc and Tillie.

On March 9, 2018, Yachty released his 2nd studio album, titled – ”Lil Boat 2.” Lil and Takeoff (an American rapper who is best known as a member of the hip hop trio Migos) have collaborated on this album.

When asked about the title of this album, Lil responded:

”It had another name at first. I always felt like people judge me and they always have opinions and shit. They’ll say, “He can’t rap,” or “He can’t do this,” or “He fell off.”

”I always felt like I had something to prove. It’s always been, “I gotta show them that I can still rap.”

Lil and his fellow rappers K$upreme and Burberry Perry make up a collective called – ”The Sailing Team.”

In July 2016, they released a team mixtape. In the same year, The Sailing Team released a music video for their song, titled – “All In.” It featured:

During the video for ”All In,” all members danced on top of a school bus.

Moreover, ”The Sailing Team” has produced and has been featured on numerous other tracks, including “One Night” and “22 Diamonds.”

In 2019, the hype of ”The Sailing Team” has died down. According to Yachty, it is due to a serious lack of work ethic of some of the members.

In 2016, Lil Yachty was in a romantic relationship with India Love Westbrooks. She is popular on Instagram, with over 3.9 million followers.

In 2011, India Love created her first Tumblr, however, she has struggled to keep the same one active due to hackers.

In 2015, India began starring alongside her sisters on The Westbrooks, a reality TV series that follows the lives of India Westbrook and her four sisters – Brooke, Morgan, Bree, and Crystal.

They broke up after India Love got real close with Soulja Boy (an American entrepreneur, actor, record producer, and rapper, who got his debut single “Crank That Soulja Boy” in September 2017) while she was still in a relationship with Lil.

Lil was a model at Kanye West’s Yeezy Season 3 show.

In September 2015, he was arrested for credit card fraud at a mall in Palm Beach Gardens, Florida.

Lil appeared in the “It Takes Two” video with Canadian singer, songwriter, and actress Carly Rae Jepsen for Target.

He was picked to be the face of the new Urban Outfitters and Nautica collection.

Lil made a guest appearance in a Sprite commercial with LeBron James.

Yachty earned most of his wealth from selling his albums (Nuthin’ 2 Prove, Teenage Emotions, and more) as well as selling tickets to his concerts.

Lil sells his own merchandise over his official website lilyachtyshop.com. On his website, the price of a t-shirt is $40 and of a hoodie is $60.

Moreover, Yachty has a YouTube channel that runs advertisements.

Therefore, American rapper Lil Yachty has an estimated net worth of $9 million.

READ THIS NEXT: Who is DJ Pooh?