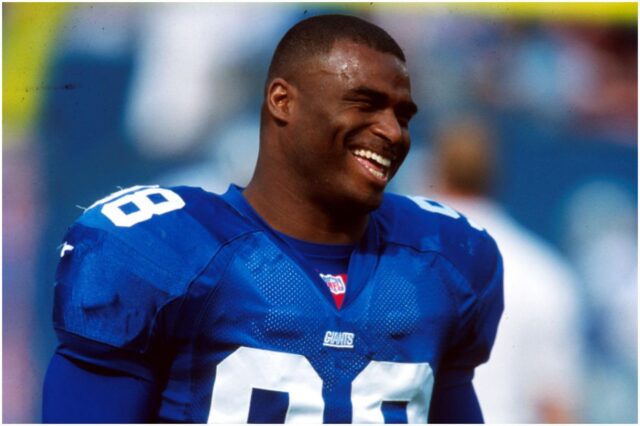 What is Jessie Armstead’s net worth?

Jessie Armstead is a former American football professional player in the NFL, who is best known for playing for 9 years for the New York Giants.

Jessie attended David W. Carter High School in Dallas. The school is a part of the Dallas Independent School District. There, Armstead was coached by Freddie James, a former American football coach.

During high school, he was part of a highly talented team that featured 4 other future National Football League players:

The team won the 1988 5A state championship. Their win against Permian High School in the state semi-final game was documented in the 2017 documentary titled “What Carter Lost” and the film Friday Night Lights.

At age 15, he had spent 6 hours in the juvenile correction center after committing theft. During an interview with Dallas News, he said:

”When I got caught, it was very embarrassing, ’cause the police officers had me, and they couldn’t believe that I had did that.”

Armstead went on to say:

”Then, for my mother to come down to juvenile to come get me, and it seemed like the longest six hours of my life.”

After college, Armstead played college football at the University of Miami, a private research university in Coral Gables. He was recruited by Jimmy Johnson, a former American football player, who is one of only 3 football coaches to lead teams to both a Super Bowl victory and a major college football championship.

Jessie was a college standout on 2 of Miami’s 5 national championship teams.

In 1993, Jessie signed with the New York Giants.

Armstead was not drafted until the 8th round of the NFL Draft since he tore his anterior cruciate ligament during his sophomore season.

In 2002, he signed a 3-year contract worth $10.5 million with the Washington Redskins, a professional American football team based in the Washington metropolitan area.

For the 2004 season, Armstead signed with the Carolina Panthers, a professional American football team based in Charlotte. The club is worth about $2.3 billion.

However, Jessie retired in the same year following a pre-season injury.

On June 13, 2007, he signed a one-day contract with the New York Giants to officially retire.

Since September 8, 2008, he has worked as a special consultant for the New York Giants. Some of his responsibilities included:

In 2010, Armstead was inducted into the New York Giants Ring of Honor.

Armstead got married to Channon Turner in 1998.

The two met during high school.

The couple has two daughters, named – Jaya and Jessica.

In February 2008, he was featured on Spike TV as one of the pros on Pros vs. Joes, an American physical reality game show that featured professional athletes (the “Pros”) matching themselves against male amateur contestants (the “Joes”).

Armstead has a Super Bowl ring from the New York Giants.

In 2017, Shaquille O’Neal and Jessie promoted an initiative to strengthen relationships between police and the communities in which they patrol, called – ”Safe Stop.”

He was interviewed about the time he played football for the University of Miami for the documentary ”The U.”

During high school, Armstead was selected as an All-American for 3 years.

READ MORE: Who is Chad Johnson?

Armstead earned most of his wealth from playing American football professionally for 11 years. His best years were with the New York Giants, where he played for nine seasons. After he left the New York Giants, Armstead signed a contract with Washington Redskins for about $10.5 million.

During his career, he had 12 interceptions for 175 yards and 752 career tackles with 40 sacks. After his football career was over, he was hired by the New York Giants as a special consultant.

Additionally, Jessie is the co-owner of National Automotive Management, an auto dealership.

READ THIS NEXT: Jeff Charleston Net Worth